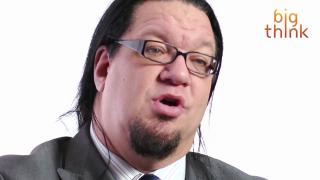 When I was on Celebrity Apprentice, I would see people who I knew fairly well, and I would see them acting in ways that I found wrong for their personalities, inappropriate; I found embarrassing at times. And I couldn’t figure out why.  When you’re outside of the whole thing, you say, well they must be giving them a lot of alcohol… which alcohol’s always available, but most people on my team didn’t drink. So that didn’t work… So maybe you’re telling people to act crazy because it would make better TV. That wasn’t happening either. No one ever talked to me about that.

And then I read, and this is not Kahneman’s work, he was quoting someone else, he just kind of brought it together for me. He talked about ego depletion, ego exhaustion. And it turns out that if you just put cameras on someone, like you’re doing to me here, and you ask them to talk, they will speak a little clearer, a little better, a little more carefully than they would if there were no cameras around.  But that only works up to a point.

And we tend to think of, or I always tended to think of, I don’t know about anybody else… I always tended to think of some – willpower – as a character trait. My mom would talk about, you know, “Penn, you have to have willpower. With a lot of willpower you have self-control.” It was very, very important in my family, very important. And I thought it was a character trait. This was something that maybe I’m born with some of it, but I also want to develop.

And the mind-blowing thing about Thinking Fast and Slow, reading that book, was that it is not a character trait. It is not a quality. It’s a muscle. The ego, the sensor, the thoughtful part of us that controls us, the self-control, is something that requires effort, and a lot of effort. And after you’ve used that for a while, if they – if you make someone very, very careful about what they say for hours, they walk by a piece of chocolate cake and they’re on a diet, they’ll still eat the chocolate cake.

When I was on Celebrity Apprentice with the camera’s on me all the time and carefully watching my move, I did not make any attempt to eat healthy. Cheeseburger, French fries every single lunch. I just don’t have the energy to use my self-control that way. And for me, when my ego breaks down, when self-control goes away, I actually get very quiet. What I tend to do is shut up. And if you watch Celebrity Apprentice, as the day goes on, I am less provocative. I am less confrontational. When I am well-rested and working and full of self-control, I am very aggressive. It’s what I do for a living. When I get tired, I get quieter, I don’t have conflicts with people. I have to push to be an asshole.

Other people who are very, very nice and whose images were very nice – I mean their public image is very pleasant and sweet – after these cameras were on them, you know, for five, six hours, all of a sudden that, what I’m calling a muscle, that self-control, would just be exhausted and they would just spew out anything that was popping into their heads, really angry squabbling and yelling and pressure.

And it was a fascinating way to look at it. It had never crossed my mind that what was happening was not some sort of mental illness but simply a kind of a lack of self-control caused simply by this ego exhaustion, which is very different. I’m not saying that – well, the way I understood Kahneman’s book or this section of the book – is not that they were physically tired or even mentally tired, but that self-control, that ego part, was tired. That part that says, you will kind of want to do this, but you should probably do that.

It was fascinating. And I – the first thing I did when I read the Daniel Kahneman book was I bought copies for all the producers on Celebrity Apprentice and sent it to them and said, “Oh, by the way, this is what you’re doing.” And it’s very funny that Kahneman talks about all these studies that have been done where they’ve put people in a room with TV cameras and had them do tasks to watch how they acted, and said, you know, they could have just saved a lot of time.  They could have just turned on the television. Almost every show is a reality show, and they’re all based on that technique, that kind of anti-Hawthorne effect, that after you’ve watched for a little while you do better, and then it all falls apart.