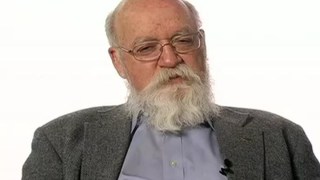 Question: What was Darwin's impact on outer space

Dennett:    Let’s imagine that we, that SETI, the Search for Extraterrestrial Intelligence suppose it pays off, and we start getting over hearing, eavesdropping on or actually communicating with getting communications from another, another civilization of some sort somewhere in the universe.  We asked ourselves what would surprise us and what would we expect and what we would expect is that they would have arithmetic and they would agree with us that 2 plus 2 is equals 4 and they’d have geometry and there’s a lot of things that they would have.  Would they have a base 10 arithmetic? Probably not or because why? Well because we are pretty sure that the reason that we have base 10 arithmetic is because we’ve got 2 of these or 5 of these and if we had only 3 fingers on the thumb on each hand then we would have base 8 arithmetic.  Of course it might turn out that they had base 10 arithmetic because having 2 of these with 5 of these is a better trick than we realize.  It’s not just a historical accident but something that is sort of a deep design reason why that would be discovered again and again and again by evolution.  I mean, eye sight I think if the planet on which these life exist has a transparent atmosphere then eye sight is a such an obviously good trick to have because it permits distal, it permits you to get information from distant objects very fast.  That’s got to be good.  It gives you an advance warning system about what’s out there.  There are many good tricks. I capitalize the G and the T.  Good Tricks in design space and what a good trick is, is something that would be discovered again and again and again there’s multiple paths to it, it’s just such a good idea that evolution will find it, whenever it’s available and I think that we can rely on that principle to anticipate and I think we do.  For instance science fiction writers and film makers, when they imagine extra terrestrial creatures, they help themselves to a lot of features which that they will, it’s got to be this way and maybe, maybe you have covered with scales and maybe you have 3 heads but there’s some things that you definitely going to have and I think it’s not just the demands of story telling.  I think it’s an appreciation with why some of these feature really are features.  There are things that no intelligent agent would be cut dead without because they’re so useful.  I think we can use that sort of reverse engineering thinking to extract like quite a bit about what we could find out in the rest of the universe.

Dennett:    Well, like many other people I fall back on Phillip Morisson’s] observation that there’s 2 possibilities that we’re alone in the universe and that we’re not and they are both mind boggling and I really don’t have a very strong opinion about which is the truth.  I am inclined toward thinking that we’re not alone.  But that’s base on sort of impressionistic, probabilistic thinking means, we’ve seen on this planet that sight has evolved not once, not twice but many times.  Flying has evolved, locomotion has evolve more than once.  Every case of convergent evolution of the sort is an important datum that suggest that there are certain sorts of things which if they can happen, they will happen.  Now, the question is, are there places elsewhere in the universe where the opportunity is available? I think it’s hard to imagine that there aren’t.

Daniel Dennett on the Staggering Genius of Charles Darwin