To have breakthrough ideas, try veering off your original field of study.

Lee attended Harvard University for graduate school receiving a Ph.D. in theoretical physics in 1979.  He held postdoctoral positions at the Institute for Advanced Study in Princeton, The Institute for Theoretical Physics (now KITP) in Santa Barbara and the Enrico Fermi Institute at the University of Chicago. This was followed by faculty positions at Yale, Syracuse and Penn State Universities, where he helped to found the Center for Gravitational Physics and Geometry.   In September of 2001 he moved to Canada to be a founding member of the Perimeter Institute for Theoretical Physics, where he has been ever since.

Lee's main contributions to research are so far to the field of quantum gravity. He was, with Abhay Ashtekar and Carlo Rovelli,  a founder of the approach known as loop quantum gravity, but he has contributed to other approaches including string theory and causal dynamical triangulations.  He is also known for proposing the notion of the landscape of theories, based on his application of Darwinian methods to Cosmology.  He has contributed also to the  foundations of quantum mechanics, elementary particle physics and theoretical biology.  He also has a strong interest in philosophy and his three books, Life of the Cosmos, Three Roads to Quantum Gravity and The Trouble with Physics are in part philosophical explorations of issues raised by contemporary physics.

LEE SMOLIN: People often speak of the beginner's mind, this wonderful ability of people, when they come new to a subject, to have an idea, to see something that's novel, that everybody else has missed that leads to a breakthrough. And this is a thing of beauty. I've experienced it myself, which I am very fortunate to say. And I have observed it a few times in my career in other people's work.

But here is the thing that I think is not true. What's not true is that it's tied, necessarily, to age so that you only get one shot. There is a thing that physicists often say. You see, all these great discoveries, like Newton-- Newton was 22, and then 24. Einstein was 26. Heisenberg was 23. Bohr was 28, et cetera.

So there is this tendency to say, you've got to have not only a fresh mind, but a young mind. And let me tell you what Chandrasekhar, who was one of the great astrophysicists of the 20th century-- indeed, of every time-- said to me when he was in his late 70s. He said, most people say that you only get one chance, and then you-- then you get in the way. Then you're useless. But he didn't think that was true, and it wasn't true in his own life.

You just had to change your subject every 10 years. So every 10 years, Chandra took the last 10 years of work, wrote a textbook, put all the calculations and all his notes in a box, put them on a shelf, and walked out and looked for something else to study. Somebody else in the domain of physics and astronomy and so forth. Because that's what he was interested in. But something completely different.

And then 10 years later, he was the master of a field. He put-- he wrote the book, he put it in a box. He put it on the shelf. And he was still doing this when he was in his late 70s, and indeed, into his 80s. And so I think it's very important to take Chandrasekhar seriously and change.

In my own life, I have always wanted to work on quantum gravity, and I've always wanted to work on quantum foundations. And I even have some themes that go through most of my thinking, most of my work. But I change direction. I change point of view. I change approach. That's why I'm not -- unlike Chandrasekhar who is my dear, dear, close friend, I don't stay on the same subject.

Einstein's Unfinished Revolution: The Search for What Lies Beyond the Quantum 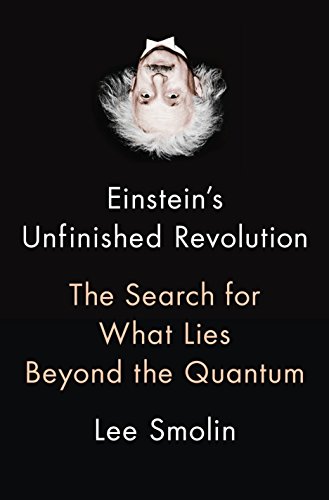 Einstein's Unfinished Revolution: The Search for What Lies Beyond the Quantum
List Price: $28.00
New From: $17.55 in Stock
Used From: $11.83 in Stock
From Your Site Articles
Related Articles Around the Web
brain creativity learning science discovery aging lee smolin