Dr. Green is the director of the National Human Genome Research Institute, one of the 27 institutes and centers that make up the U.S. National Institutes of Health, the federal[…]
Go to Profile 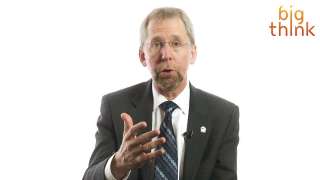 Cancer is fundamentally a disease of the genome. What has happened in the past ten years since the end of the Human Genome Project is the recognition that we can read out the genome, and read the sequence of a tumor’s DNA and gain insights from that tumor.

Eric Green:  So cancer is fundamentally a disease of the genome.  I mean the reason a tumor grows is because the cells in that tumor have picked up glitches.  They picked up mutations.  They picked up changes in the DNA that make those cells grow out of control.  It’s like pressing an accelerator in a car and just keep it going.  It just grows and grows and grows and grows.  And the reason why is because something’s broken in the genome.  And so what’s happened in the past ten years in particular since the end of the Human Genome Project is the recognition that we can read out the genome, the sequence of the tumor’s DNA and gain insights from that tumor with respect to what had been the DNA changes that have led to those cells becoming a cancer.

And that is being done on a very large scale in many countries around the world and here including the United States where literally very defined cancers are being studied.  Hundreds of specimens are being collected from people and those genomes of those tumors are being read out and have all that data be put on the Internet for scientists to be able to collect it all and analyze it.  And we are learning a tremendous amount about cancer in many very interesting and surprising ways.  And among the many things that are happening is it’s giving us insights about how to better classify different types of cancer and different subtypes of cancer.  And I often make the point that some of the earliest implementation of genomics in the medical situation is gonna be with cancer.

And it’s already happening now and I think it’s gonna grow considerably.  Where I think standard of care for many types of cancer are gonna be get that tumor, read out it’s DNA, sequence it’s genome and based on what you’ve seen what’s wrong with that tumor, not by looking at it under a microscope only or by looking at it in a sort of a gross fashion but actually looking inside it’s blueprint, you will be able to have a much better way of deciding what types of treatments to pursue and have a much better idea about what’s wrong in that kind of tumor.  And some of those things will also be very helpful for leading to possibly new developments of therapies.

Sharon Salzberg: Kindness is No Weakness