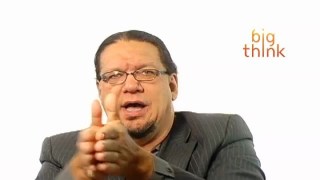 Camera Tricks Are Not Magic

When the Penn watches televised magic, he has “a very real sense” that he’s watching different takes stuck together.

Question: Does magic have to be performed live?

Pennrn Jillette: There are performers who have built their whole career rndoing magic on TV and can't really perform live at all—don't really havern jobs and skills. And people watch those shows and seem to enjoy them. Irn don't think it's magic. I don't think it's valid and not because rnthey're doing camera tricks which they are, and not because they're rnusing plants, which they are. And not because they're using editing rntricks, which they are. The problem is simply that what you've seen on rnthat screen, what you're competing with... I mean, once you've shown rn"Avatar" on video what does sleight of hand mean? It means nothing.

Andrn you can't keep telling people, "We're not cheating. No honest, we rnreally mean this." What does that matter when your job is to lie? The rnmost amazing trick I could ever do for you is to be from one place to rnanother place instantly and that's done about three times a minute on rnevery TV show, even the news. So I don't think you can do that. Whereas rnin the theater Teller and I don't have to spend a moment saying: "We're rnnot using camera tricks." Because what we're doing there in that room isrn following the rules of physics and the rules of time that you've dealt rnwith since birth.

rnAnd that makes it bypass a certain kind of intellect that makes it rnfascinating to me. That's what I think, but there are many people that rnwatch Chris Angel and, go: "Ooh, that's a magic trick." It's not to me rnbut they are, "Ooh it is." So they're not wrong they just, you know, rnhave a different perception of what video does and I do. I mean, there rnare people that will watch things on Chris's show that to me are crystalrn clear how they're being done, and they seem to fool people. I mean, if rnyou want a very simple example: if you go out on the street with your rncamera and you take a deck of cards and you let the person open the rncards, shuffle them, clean deck, nothing, reach in, pick out a card, rnpeek at it, put it down, and you say, "Is that the seven of diamonds?"

Ifrn you go out on the street in New York and do that for two hours rneventually you'll be right. You know, you don't have to do any other rncheats other than editing, just pick the time it works. You know, show rnus the time it works and you've done magic and you don't have to design rnany of that. So to me that's really clear. Whenever I'm watching TV I rnhave a very real sense that I'm watching different tries of the same rnthing stuck together. And with that sense in my heart, with my sense in rnmy heart that when you're watching DeNiro do a take that he might have rndone that 15 times. It's different for me than watching an actor in the rntheater that i know is going directly into what he's doing now from whatrn he did 10 minutes ago because we were both in the room in realtime. I rnthink it's an entirely different thing but most people don't.

rnQuestion: Have you ever flubbed a trick in a live performance?
rn
Penn Jillette: Well every night. I mean, I would say a rn100 percent of the time. It all depends on your definition of "flubbed."rn You're always wanting to be a little better. One of the great things...rn Michael Goudeau, who's the head writer on "Bullshit" and also a jugglerrn in the Lance Burton show. Michael Goudeau said that variety arts were rnfor people who watched the movie "Groundhog Day" and thought it looked rnlike a good thing. It's wonderful to do things over and over again to bern able to do them right. And you always strive to do them better.

Wern have had tricks not work. We've had embarrassment with that... not rnoften. But the thing I'm most proud of in my career is that in 35 years rnof doing shows, not Teller, not me but as importantly, no one that worksrn with us has ever been injured seriously. And by seriously I mean rnhospital overnight. You know, you're allowed to cut yourself, you can dorn that, you know, you can... within my morality you can even break a rnbone. We haven't had that happen but within my morality you can.

Butrn people who get badly injured in show business that is... that's wrong. rnAnd the idea of doing stuff that's really dangerous is to me rndistasteful. The idea of magic and performance is to celebrate life and rnhealth. And when you do a movie that is supposedly full of violence the rnrepresentation of violence and no one gets hurt, that's a celebration ofrn everything beautiful. When you do a movie or a performance where rnsomeone really does get hurt it's in a certain... artistically, it's a rnviolation of humanity.

I don't know about this trend that David rnand Chris do where they do stuff that is supposed to convince people rnthey really hurt themselves, or that they're really suffering. That, to rnme, is not beautiful. I'm not interested in that. What interests me is rnthe fact that Teller and I do the bullet catch at the end of our show rnwhere we fire 357 Magnum into each other's faces and ostensibly catch rnthe bullet. And saying that... that's a trick and bragging that we've rnnever been hurt, and bragging that we can't be hurt isn't such a good rntrick, to me is beautiful.