Robbie Kellman Baxter
Robbie Kellman Baxter is the author of The Membership Economy: Find Your Superusers, Master the Forever Transaction & Build Recurring Revenue (McGraw-Hill 2015), and The Forever Transaction: How to Build a Business So Compelling, Your Customers Will Never Want to Leave (McGraw-Hill 2020). Robbie’s expertise extends to include SaaS, media, consumer products and retail and community organizations. Her clients have included Microsoft, Fitbit and The Wall Street Journal.
27 January, 2020

ROBBIE KELLMAN BAXTER: The membership economy is a term that I coined to describe what I was seeing, starting about 15 years ago when I was working with Netflix and continuing into this massive transformational trend where companies of all types were moving from a model that focuses on ownership to access, from the transactional to the relational, from anonymous to known, from one payment to many smaller payments and from the organization talking at the customer and hoping they're listening to multidirectional communication among customers and back and forth between the customers and the organization under the brand umbrella of the organization. So when you put all of those things together you have this kind of painter's palette to reinvent your business model and that's what's driving this membership economy.

So membership isn't a new concept. We have been joining things for as long as there have been humans. We joined clans or tribes. We've had professional societies and trade guilds for centuries. Charles Dickens sold his novels in subscription format so people subscribed to have access and as he had the chapters done he would deliver them to his subscribers. So this is not a new concept, but what has changed is the ability to build a business model around it that transcends time and space. So Charles Dickens actually had to know the people he was delivering to, had to print it out, had to bring it to them. Today we can deliver it to strangers digitally and we can do it with time lapse. So that has created so many possibilities for organizations to build this ongoing relationship, which is what people want.

One example of the difference between a membership economy company and a non-membership economy company is the comparison between Blockbuster and Netflix. So when people, you know, way back when people used to have to go to the corner store to the Blockbuster on a Friday night to see what movies were available to rent, bring them home and it was never the movie that you really wanted. it was whatever happened to be available. And then if you forgot that you had it and you kept it for a few extra days the cost would end up being like triple what you thought it was going to be. And compare that to Netflix where they sent you three DVDs at a time, so three movies that you had on your long list, your queue. You didn't have to leave your home. You always had three movies at home. And, best of all no late fees. So it's a very different way of thinking about the model that starts with a forever promise. A promise of what it is that you really want to achieve.

So in the case of Netflix versus Blockbuster, which was what really inspired me, what I wanted was to always have movies, professionally created content delivered in the most efficient way possible because I had little babies, with cost certainty—no late fees. And that's what Netflix delivered on 15 years ago that pretty much put Blockbuster out of business. And today even though they have streaming, even though they create their own content, even though a lot has changed at Netflix they still deliver everyday on that promise of professionally created content delivered with cost certainty in the most efficient way possible.

I think that the membership economy is having as big an impact on business as the industrial revolution. What I see is a new way of engaging with the customer, a new set of skills that are required for the professional and a new way for entrepreneurs and business leaders to design the entire model from the ground up. It's creating new businesses everywhere. There are literally hundreds, if not thousands, of new companies that are built in this model. Subscription box businesses, digital content. The reason is that you can start as a solopreneur, as a one-person shop, and you can expand very, very rapidly in many cases because of the ability to share your digital assets widely and the ability to send content or physical products directly to the customer, taking out the middleman. So it's really a rethinking of how businesses are structured and how they deliver value. 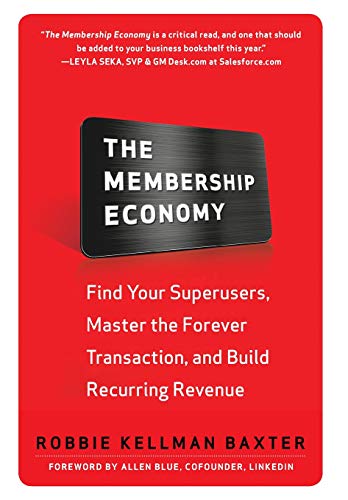 The Membership Economy: Find Your Super Users, Master the Forever Transaction, and Build Recurring Revenue
List Price: $28.00
New From: $11.97 in Stock
Used From: $6.99 in Stock