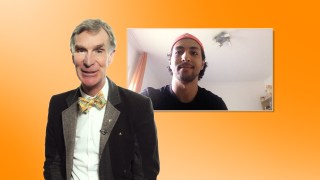 Hey Bill Nye! Why Don’t Computers Allow Us to Talk Directly to Animals?

Could we use computers to translate animal communication into human language? If so, what would we learn? And might it unlock a new understanding of existence and our place in the cosmos?
▸
6 min
—
with
Bill Nye, The Science Guy

Computers are great a decoding data and recognizing patterns, so might animal communication contain patterns which could be decoded, and then translated into human language? Animals certainly have an interior life of some kind, confirms Bill Nye, who has observed dogs and primates on various occasions. But the extent to which animal communication is as complex — as intentional — as human language is in doubt.

There appears to be a spectrum of intelligence among animals, including humans, but there is precious little evidence that animals understand complex concepts like existence, the self, time, or mathematics. So were to translate animal communication, it might turn out something like the dog in Pixar’s film Up, who hilariously brings people’s attention to any nearby squirrel. A funny premise for comedy, but a rather vexing one for stimulating conversation.

Of the emotional life of animals, however, there can be do doubt. When a primate dies, for example, the community it belonged to mourns visibly. In this reply to a Big Think fan, Bill Nye wonders whether a lack of linguistic concepts — memory, longing, death, afterlife, etc. — naturally shortens the mourning period animals perform. Ultimately when it comes to communicating with animals, we may not need to translate their communicative performances into language. They already contain meaning that we understand.

Hassa: Hey Bill. I’m a big fan of your work. This is Hassa from Tunisia. I’m at the University of Freiburg in Germany. My question for you today is how can it be that human beings still can’t communicate with animals? I mean we have powerful computers by now. Isn’t it just easier to just record a lot of data, let the computers look for a pattern and play them back and it allows the responses. Imagine all the implications. Animals can become better tools for us or even closer friends. And can even ask them what their perspective of life is. I hope you answer my question. Have a nice day.

Bill Nye: Hello, hello. Hassick? Did I pronounce it correctly? I’m doing my best. I only heard it once and the sound is not too good. Hassick, greetings. Thank you for your question. Can we communicate with animals better than we do now. Well I’ve spent a lot of time with dogs and I really have a sense of what they’re thinking. I certainly have a sense of when they’re happy and when they’re sad. I’ve spent a little bit of time with gorillas. Now I’m talking about a tiny amount of time. But you can certainly tell when a gorilla is happy, when a gorilla is angry and you can also tell when gorillas are communicating with each other. Now this is one of the things I wonder about all the time. Is there a gradient, is there an increasing stair step of intelligence, of language skill between let’s say a gibbon, a bonobo, a gorilla, a chimpanzee, a human. Is there a gradient of intelligence from cow to horse to zebra to giraffe. I don’t know but these animals certainly the mammals anyway certainly have emotions that we can detect and interact with. But I’m very skeptical so far that animals really ponder the universe and our place within it. And I’m very skeptical that bonobos or chimpanzees have developed something like the periodic table of the elements.

However with that said if you ever saw the movie UP which is an animated move. I think the word poignant in English would be very descriptive. It’s bittersweet but there’s a fabulous scientific premise, a science fiction premise where the inventor has a collar that enables dogs to speak English. It’s fabulous. And I don’t know maybe they translated it into German and you watched it in German. But wouldn’t that be fun if you could talk to dogs in English or human language sentences. Wouldn’t that just be the most fun ever. But I’m skeptical – just for example when a human dies we go to all kinds of trouble. We’ve got funeral homes and cemeteries. But when a primate dies there is apparently a period of mourning in the troop or the barrel of monkeys, of chimpanzees but then they get over it much more quickly than humans do. And I wonder is that for evolution like they have to get over it in order to go forage for food and get on with their lives.

Or is their memory of it just kind of not as intense as humans because they don’t have a language that reinforces this person’s memory and the interactions you have with your fellow primate. I wonder this. So to answer your question I am absolutely not sure. But intuitively it seems like this gradient of intelligence would limit the amount that we could talk with animals. Now by the way I don’t know if you’ve ever been in to Aquaman. He can talk to fish. He talks to fish. Tarzan, king of the jungle, talks to all his animal guys, people, animal friends. They’re not people. And so that is certainly something humans have thought about for centuries or those myths wouldn’t exist.

Hassick, one more thing about using computers to communicate with
animals. Keep in mind that the computers have to be programmed. Somebody would have to at least early here in the twenty-first century computers are not self-organizing enough to decide to make a program to communicate with animals. But in the ornithology community, people who study birds, they work really hard to understand bird calls. They record them, reproduce them, try to communicate with birds. Certainly people try to imitate whale sounds and marine mammal sounds.

But I don’t think it’s to the point where anybody has taken a meeting with them and talking about the fundamental theorem of calculus or the rocket equation or how to raise crops under water or whatever it is. So I’m interested in this gradient of intelligence and it’ll be up to you to write the computer program that enables this idea of yours. The answer is definitely maybe.