Arne Duncan
Arne Duncan was one of the longest serving members of President Barack Obama’s cabinet and among the most influential Secretaries of Education in history. He is now a managing partner with the Emerson Collective.
26 August, 2019

And good jobs, high wage, high-skilled jobs are going to go to the nation that does the best job of educating their citizens. And I desperately want those jobs to be here in America and Id rather them of the year than in China or India or Singapore or wherever else, South Korea wherever else you might talk about. For us to do that we as a nation have to embrace the opportunity I would say the imperative of having a great, great education system.

Where we are now today quite candidly isn't good enough. If you look at early childhood we ranked 30th in terms of access to pre-K; its a dismal record. If you look at math and reading science scores at the high school level we re somewhere usually between 15th and 30th internationally; you look at college completion rate were about 16th. To sum all that up were top 10 in nothing. And while there are amazing bright spots, theres stuff thats so inspiring that I traveled the country and was lucky enough to see every day we have to get better faster and we have to do it with a real sense of urgency.

Its a tough comment for me to make or tough belief to have that too much of education involves lies. Well, let me just walk through a couple of them: I tell the story early in the book of a young man I worked with named Calvin Williams who was a rising senior who was a very good basketball player was on the B-honor roll at his high school and wanted me to help prep him for the ACT so he could go to a division one school to receive a basketball scholarship. And very quickly after we started working I found out that he was functionally illiterate, he was really struggling with the basics. And that was just devastating to me because this was a young man coming from a very tough environment never smoked, never drink, stayed away from the gangs, wasn't caught in violence, he played by all of our societal rules and yet we collectively had let him down. He was not nearly prepared to take that next step in his educational journey. That story is unfortunately all too often true.

A second lie is that we say we value education but we never vote around education, we never hold politicians at any level, local, state, federal accountable for increasing access to high-quality pre-K or raising high school graduation rates or making college more accessible and affordable. And for me education should be the ultimate bipartisan or non-partisan issue. I do care less left, right, Republican, Democrat, I just want us as voters to vote on these issues. Third, we say we value teachers, but we don't pay them as professionals, we don't train them as professionals, we don't have career ladders that make sense and teaching is some of the most important most challenging most complex work imaginable. We trust literally our babies' futures to our nations teachers, but we don't respect them and treat them and compensate them as such.

Then the final one and maybe the toughest is the lie that we say we value our children. And Ive struggled with the issue of gun violence all of my life. I was a teenager 12 13 14 I started to lose friends to gun violence and candidly I think that shapes you and scars you in some very difficult ways that are hard to talk about. And children and adults simply don't die in other nations like they do here with gun violence. We had staggeringly high rates and it doesn't happen in Australia where my wife is from or in Canada or in England or in Japan. So I listen to what people say but I pay a lot more attention to what they do, to their actions, to their policies, to their budgets and when we don't vote on education, when we don't truly value teachers and we don't keep our children safe and free from trauma and fear I question the reality of those words. 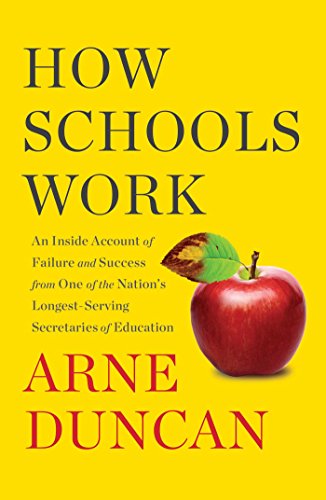 How Schools Work: An Inside Account of Failure and Success from One of the Nation's Longest-Serving Secretaries of Education
List Price: $26.99
New From: $4.94 in Stock
Used From: $1.67 in Stock