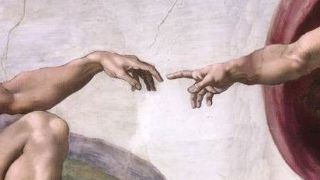 Are Science and Religion Compatible?

Science has very definite faith components, and most religions don’t stick to faith.

Question: Can science and religion coexist?

George Church:I think that while science and religion . . .

Science has very definite faith components, and most religions don’t stick to faith. They venture out into making predictions about our physical world. They don’t just say there’s something that is completely unconnected to us. They say actually it affects a lot. And when they do that they merge.

We know that there is a connection between our feelings and our brain. Our brain is something that we can study scientifically. So I think they can and should coexist.

There’s a lot of faith expressed by scientists about science. It’s kind of an act of faith that science is a good thing. We don’t know that for sure. We may not know that millions of years from now. And by good things, even phrasing goodness in a scientific context like survival of the species would be something that probably scientists would agree is a good thing. We won’t know whether science is a good thing for the survival of species rather than having entirely faith-based. So I think these things are fair. They are solvable. They are addressable. We can bring them together, but it requires less extreme views, or what would benefit from less extreme views.

Re: Can science solve our biggest problems?