Frans de Waal: Well, my cynical reaction to questions about consciousness is, "You tell me what it is, and I tell you if an elephant has it." And that usually shuts people up, because you will not be able to tell me what it is and how I should measure it. That is not a good reaction, because I actually believe that animals have some level of consciousness. So for example, the approach that I sometimes take is that there are certain things that we humans cannot do without consciousness. If we find these kind of actions also in other species, we must assume that they also involve consciousness. So for example, you cannot plan a party for tomorrow for your friends without consciously thinking about how much beer you need, what kind of music you're going to play, who's going to be invited. You have to consciously think about the event before you can plan it. Now we have very good evidence that animals can plan. We have lots of experiments now on it. And we have nature observations. For example, chimpanzees will collect tools on one location and then walk for three miles. And so then an hour later, they're going to use these tools to fish for termites or to open a beehive, meaning that they probably had been planning the action. And we test that out in the laboratory. And we have evidence for planning in birds, for planning in apes. So if they can plan, and we plan consciously, it's very hard to imagine that they can do these same things that we do unconsciously. I find that hard to imagine. We have other things, like thinking back in time, thinking back to events that happened a year ago. Can you do that? We have now ways of testing that it's called episodic memory in animals. And animals have that capacity. You cannot think back to a specific event in time, let's say your wedding or whatever it is, you cannot think back to a specific event without consciously thinking about that. And so there are certain things that animals do and that we have now evidence for that require in humans consciousness, and I think that's a good indicator that the animals must also have that kind of consciousness. 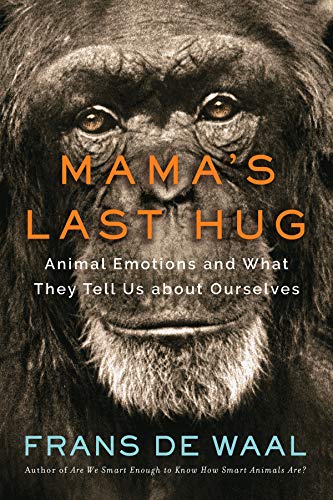 Mama's Last Hug: Animal Emotions and What They Tell Us about Ourselves
List Price: $27.95
New From: $12.95 in Stock
Used From: $16.49 in Stock
From Your Site Articles
Related Articles Around the Web
consciousness mind brain cognitive science frans de waal animals

Colorado is a rectangle? Think again.