Freeman J. Dyson is Professor Emeritus of Mathematical Physics and Astrophysics in the School of Natural Sciences at the Institute for Advanced Study in Princeton. He has taught as a[…]
Go to Profile 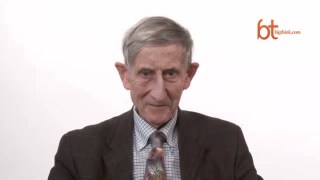 Freeman Dyson recalls the excitement of contributing a missing puzzle piece to the study of atomic science.

Question: Have you ever been totally surprised by the outcome of your own research?

Freeman Dyson:  I was amazed when I did this work, which was the first thing I did in physics, which was really what made me famous, this quantum electrodynamics.  I mean what I was doing was calculating what an electron decides to do in a certain situation, in an experiment and I did a huge calculation which took pages and pages and pages of paper and in the end I got a number, so that is what the electron has to do, and well then somebody in New York does the experiment and the electron somehow knows that.  The electron does exactly what I calculated.  To me that was amazing.  I mean why should the electron know?  How does the electron know?  Somehow it does.  Anyway, to me that sounds like a miracle.

Question: What was your role in the development of quantum electrodyamics?

Freeman Dyson:  That’s very hard.  I really need equations and a blackboard to do that.  I mean it’s very technical stuff.  I mean essentially I was a mathematician and so my job was just cleaning up the mathematics.  All the physics already had been done.  That’s to say the ideas were already there and all I had to do was just organize calculations, so that’s about all I can say.  I can’t tell you the details, but so I had a…  I had arrived as a young student and all the work had really already been done to understand atoms and light and radio waves, and all the components were in a way understood, but nobody understood how to organize the calculations, so that was my job.

Question: What is the field basically attempting to study?

Freeman Dyson:  Yes, well I can tell you roughly what happened.  I mean that the atoms by and large were understood in the 1920s when quantum mechanics was invented and quantum mechanics is the part of science which tells how atoms actually behave, and so that was all more or less worked out in the 1920s, but there were some fine details left over, and particularly there was an experiment which was done in America at Columbia University in the 1946, just after the war, which disagreed with quantum mechanics and so it was clear we had a real discrepancy.  Theory said one thing and the experiment said something different, so that was the stimulus that started me going, that there was something there to be explained, which wasn’t understood and to try to see why that experiment gave the answer it did, so it was a big opportunity for a young student starting to have actually an experiment which contradicted the theory, so that’s was my chance to understand that, and I found out that if you did the calculation in a different way that you got the right answer.

Could Science Make the 21st Century Worse Than the 20th?