To live through a pandemic, Albert Camus wrote, is to be made to live as an exile.

Lovers are parted from lovers, (grand)parents from children, families from their dead. And we are exiled from many things we enjoy: freedom of movement, the ability to eat out or swim at public pools …

In such times, older wisdom traditions can be helpful. The ancient Stoics wrote extensively about facing death, grief, illness, exile and other adversities.

The Roman Stoic Seneca (4-65 CE), philosopher-counsellor to the emperor Nero, is the author of many letters and dialogues on subjects as diverse as the natural world and virtues like constancy and clemency.

When he was exiled by the Emperor Claudius in 41 CE, a fate he would share with several Stoics in this period, Seneca wrote a consolation to his mother to help her deal with his absence.

A basic idea Seneca shares with other Stoics like Musonius Rufus and Epictetus, is that it is not events in the world by themselves that make people suffer. The ideas we form about these events also matter. Our ideas filter what we experience. So, if through reflection, meditation, and reasoning we can change these filters, our experience of the world will alter.

Even the most fortunate people need to learn how to respond when things don’t go as they wish. Here are six counsels a Stoic like Seneca might offer those in lockdown or isolation today.

Work with what we can change

Lamenting what we can’t change is understandable, but not effective. We can’t change that COVID-19 exists. We can change how we respond to it. We can stay home, wear masks when we go out, practise social distancing and remind ourselves that these personal inconveniences are there to protect others as well as ourselves — using this as an opportunity to grow our sense of service and community.

One way to minimise anger, Seneca argues, is to limit your concerns to what you know for sure. If someone tells you something nasty about a third party, you should check whether it is true before leaping to an emotional judgement. In the same way, if you read something on the internet alleging a conspiracy, before accepting it as true, ask yourself whether you know it for sure. If the answer is “no”, then don’t jump to conclusions.

The Stoics noticed that we make our hardships worse when we imagine that they are exceptional. So, it puts things in perspective to remember other generations have suffered wars spanning decades, and worse plagues than we are experiencing. This is not, as Seneca writes:

to teach you that this often befalls people […] but to let you know that there have been many who have lightened their misfortunes by patient endurance of them.

Things could be worse. Other individuals, every day, face far greater hardships than we are facing. 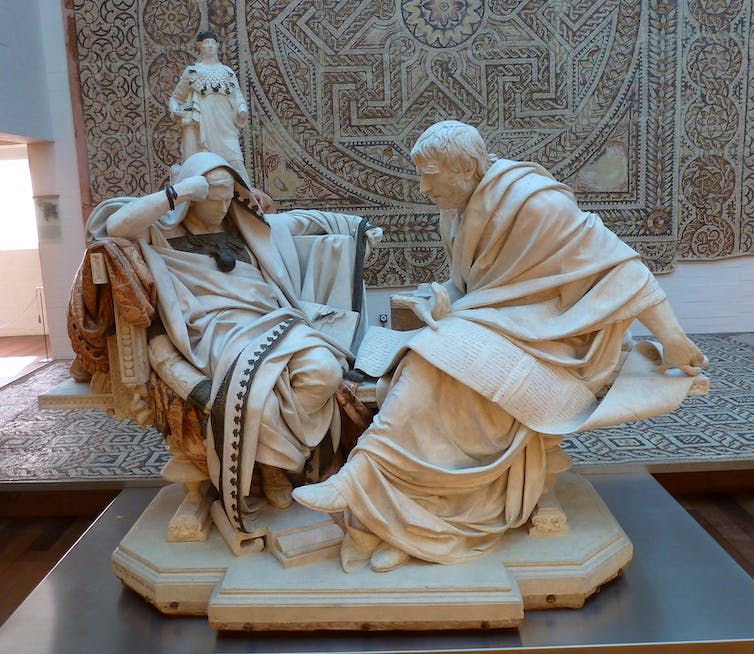 A plaster sculpture of Seneca, on right, and the emperor Nero by Eduardo Barrón. (Wikimedia Commons)

Remember that the people we most admire didn’t always have it their own way. It is their proven willingness to do the hard things for causes greater than themselves that makes them inspiring.

“For we are naturally disposed to admire more than anything else the man who shows fortitude in adversity,” Seneca observes.

Think of people you look up to, whether athletes, philosophers, scientists, philanthropists, and ask: how would they have responded in our situation?

Premeditate the worst, hope and work for the best

Stoics like Seneca knew that our fear and negative emotions strike us hardest when something happens for which we aren’t prepared.

For this reason, they advise us to imaginatively rehearse how we will respond to the worst possible outcomes in advance (like, say, Melbourne’s hard lockdown lasting until December or January).

Forewarned is forearmed. The flipside is that when the worst (hopefully) doesn’t transpire, you can savour the fact that things are comparatively good.

Enjoy what is (still) in our power

Remember that if we can’t do many things right now, we can still do others. “I am as joyous and cheerful as in my best days,” Seneca reassures his mum from exile in Corsica:

indeed these days are my best, because my mind is relieved from all pressure of business and is at leisure to attend to its own affairs, and at one time amuses itself with lighter studies, at another eagerly presses its inquiries into its own nature and that of the universe […]

We can’t all be Senecas. But being stuck at home doesn’t stop us from loving, reading, studying, laughing (including at ourselves), listening to music, watching good TV, having great conversations, trying to be patient with our kids […]

No one wishes for adversity, but Stoic philosophy can help us overcome it.

Tags
coronavirusCurrent Eventsmental healthpandemicpersonal growthphilosophypsychologyselfThe Present
In this article
coronavirusCurrent Eventsmental healthpandemicpersonal growthphilosophypsychologyselfThe Present
Related
The Learning Curve
Why do high IQ people stagnate in their careers? Emotional intelligence
Research suggests that emotional intelligence is more vital for success than IQ.
How to live after your soulmate has died
Astronomer Michelle Thaller explains the healing power of physics after losing her husband.
▸
7 min
—
with
Michelle Thaller
The Future
Space travel will radically change human psychology and spirituality
We are traveling in a realm that once exclusively belonged to the gods. Space travel will force humanity to rethink everything.
Neuropsych
Memory and the benefits of forgetting
Forgetfulness isn’t always a “glitch” in our memories; it can be a tool to help us make sense of the present and plan for the future.
The Learning Curve
5 Stoic quotes to help you through difficult times
“We suffer more often in the imagination than in reality.”
Up Next
Neuropsych
Risk-taking behavior has a unique and complex brain signature
How much of this can be linked to genetics?