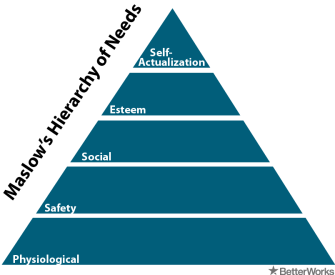 It’s a staple of pop psychology. Most are, by now, familiar with Abraham Maslow’s hierarchy of needs. The model describes 5 varieties of needs, each of which must be satisfied before one can move up to the next level of the pyramid. At the very bottom, there are physiological needs like the need for food, water, and sleep. If you haven’t got enough food, for example, it’s very unlikely that you’ll feel motivated to pursue the needs at the next level of the pyramid, which are safety needs. These include feeling financially secure, safe from harm, and being healthy. The next level focuses on the need to feel social belonging, such as feeling loved and having friendships. Then there are the esteem needs, such as a sense of mastery and competence. And finally, there’s the summit of the pyramid, the ultimate goal of self-actualization.

The model makes intuitive sense, and it gives us the impression that so long as we work hard, we can make inexorable progress to the top of the pyramid. It’s grown so popular that unlike most academic theories, it’s broken out of the ivory tower and has gained new life among wellness blogs and motivational speakers. But Maslow’s hierarchy of needs and the idea of self-actualization in particular have some serious flaws. In fact, our dogged pursuit to become the best version of ourselves and live our best lives might be doing more harm than good.

Maslow’s work was revolutionary in the sense that prior to his hierarchical theory of human motivation, most psychology only sought to explain disorders — the ways in which human beings deviate from “normal.” The trouble is, nobody knew exactly what a “normal” human was. Maslow’s hierarchy of needs landed him in the growing field of humanistic psychology, which seeks to explain human nature holistically.

But Maslow’s hierarchical model represents just the first few steps into a developing field, not a definitive picture of human nature. As Maslow’s model spread outside of the realm of the academic, it took on more of an air of something obviously and inherently true, a roadmap to becoming a complete and happy human being. But Maslow never intended the hierarchy of needs to be a prescriptive model. It doesn’t tell you what you should be doing. Instead, it’s a descriptive model; it tells you the way things are under certain conditions. Striving for self-actualization rather than allowing for the need to self-actualize arise naturally might actually do more harm than good.

“[…] the desire for self-fulfillment, namely, to the tendency for [an individual] to become actualized in what he is potentially. This tendency might be phrased as the desire to become more and more what one is, to become everything that one is capable of becoming.”

The key here is that self-actualization is a fulfillment of what one is actually capable of becoming — not what one wants to become. This misconception becomes tricky when we think of self-actualization as a goal in and of itself. Rather than pursuing the natural, innate motivations that would lead to self-actualization, sometimes we pursue the concept of self-actualization itself. More often than not, this leads down a futile path of struggling to become a person we’re not, of transforming our real selves into an illusory self-image. This quickly turns into a pursuit of perfection, which works against self-actualization. Perfectionism has been linked to higher levels of anxiety, depression, and suicidal ideation. In his later work, “Critique of Self-Actualization Theory,” Maslow wrote:

“In a word, when life is judged as not worthwhile — whether through the accumulation of pains or the absence of peak-experiences and positive joys — then humanistic psychology is worthless. It speaks only to those people who want to live, grow, become happier and more effective, fulfill themselves, like themselves better, improve in general, and move toward the ideal of perfection, even though they never expect fully to reach that point.”

Does self-actualization even capture the big picture?

In addition to misunderstanding Maslow’s description of self-actualization, we should also be aware that the concept itself has some major flaws. For starters, Maslow’s picture of self-actualization is an awfully subjective one. In his book, Motivation and Personality, Maslow describes the qualities of self-actualized people as being realistic, accepting of the self and others, possessing a sense of autonomy, having a focus on completing tasks or fixing problems, possessing a constantly renewed perspective of the world, having few but close friends, being comfortable with solitude, and self-reliance, among others.

Maslow developed this list of qualities by studying the top 1% “healthiest” college students and several historical figures that he believed had been self-actualized. As part of his definition of the healthiest students, he looked for those with an absence of neuroses as well as those whom he thought were good examples of self-actualized individuals. This is, unfortunately, a circular methodology. Maslow was studying living and historical individuals he believed to be self-actualized with the goal of qualifying what self-actualization is.

Between public misunderstandings of the term and its own subjective nature, we have to question whether pop psychology’s fascination with self-actualization is a useful one. Yes, it’s a concept that makes sense; we all know we can become better, and realizing our potential in a way that strives for perfection without vainly becoming obsessed with it strikes us as behavior that’s inherently correct. But self-actualization is merely a description of a phenomenon, and not an entirely accurate description at that. Worrying about what one needs to do to accomplish self-actualization and whether one can become self-actualized is counter-productive.

Maslow’s hierarchy of needs was never designed to live outside of the ivory tower of academia. Within that tower, it has been criticized and refined and criticized again, but we don’t often receive the benefit of those reviews outside of academia. So, the next time a self-help guru tells you what you need to do to achieve self-actualization, take it with a grain of salt.

Tags
mindmotivationphilosophypsychologyself
In this article
mindmotivationphilosophypsychologyself
Related
Neuropsych
Memory and the benefits of forgetting
Forgetfulness isn’t always a “glitch” in our memories; it can be a tool to help us make sense of the present and plan for the future.
The Learning Curve
5 Stoic quotes to help you through difficult times
“We suffer more often in the imagination than in reality.”
Thinking
6 great philosophers and how they used their political power
Most philosophers merely contemplate the world, but what about the ones who actually tried to change it?
Stoicism: How to turn your sadness into strength
Chloé Valdary shares the ancient Stoic principle that can defeat modern despair.
▸
7 min
—
with
Chloé Valdary
Sponsored
Want to boost your happiness? Buy experiences, not material possessions
Some experiences continue to pay dividends time and time again.
Up Next
Hard Science
‘Apollo 11 in Real Time’ website replays every second of historic mission
July 16, 2019 marks the 50th anniversary of the mission that first landed a man on the Moon.