New, unpublished research claims that during an important Sufi ritual, the heartbeats of participants unified. 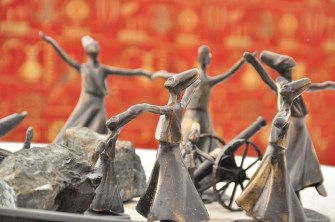 Sufism is a mystical dimension of the Islamic faith. Dimitris Xygalatas and Christopher Manoharan, two anthropologists at the University of Connecticut who conducted the study, describe it as “a meditative and highly devout form of Islamic worship that emphasizes a heart-based knowledge of God’s oneness.” This is a spiritual knowledge that Sufis call marifat, which practitioners come to know through direct experience such as meditation, dreams, music, ritual, and entrance into deep states of religious trance.

According to Xygalatas and Manoharan, the largest and most important Sufi ritual is the dhikr. Translating to “remembrance,” it is often referred to by Sufis as “the way of the heart.” This communal ritual lasts several hours and includes devotees joining together in deep meditation or ecstatic trance, and sacred sound and movement including the whirling dervish, a dancing meditation started by the 13th-century Sufi mystic and poet Jalaluddin Rumi.

The authors, who study ritual and religion, did an in-depth study on a Sufi Muslim congregation called the Uşşaki order that meets weekly in downtown Istanbul for a dhikr ritual. In the study, Xygalatas took a unique ethnographic approach. He monitored 20 of the practitioners’ heart rates using heart monitors worn under their garments. The reason for doing this was because, according to Sufi’s, during their ritual hearts are said to “beat as one” as they come together to remember Allah.

“We were curious to see whether this notion would be supported by biological data,” wrote Xygalatas and Manoharan. “Our recent (not yet published) research shows that their quest to unify hearts in celebration of God does go beyond metaphor: Their hearts really do beat as one.”

The discovery, though deeply intriguing, is not unprecedented. Other studies have found that individuals who are closely connected emotionally and socially experience physiological synchronization. For example, a 2013 study found that lovers’ heart beats synch up. And, in another study reported by Aeon, during intense rituals like fire-walking, remarkable degrees of heart-rate harmonization were found between the participants of the event as well as onlookers. Similarly to the study on lovers’ heart rates, the study on fire-walking found that the participant’s heartbeat was more closely aligned with those he was in social proximity to, such as his wife or friends. This correlation was so strong that researchers were actually able to predict the level of social proximity between two people solely by looking at the heart-rate data.

What these heartbeat studies tells us is that, although we may believe we live our lives in isolated bodies, we are not physically severed off from the rest of the world. Natural rhythms have influence over us and our relations to others. In fact, according to Michael Richardson, a psychologist at the University of Cincinnati in Ohio, the harmonization of heartbeats is a part of a natural law.

“The natural law of coupled oscillators holds that when two or more rhythms meet, they will become coordinated—a phenomenon seen across the natural world, from fireflies matching their flashes to groups falling into step,” Richardson told National Geographic in 2011.

It has long been the subject of fascination by anthropologists and sociologists that rituals, particularly intense rituals, bind people together. Research like that conducted by Xygalatas and Manoharan on Sufis is starting to give us a glimpse at how bonding is achieved at the physiological level.

Strong social connections have long been linked to living a healthier, longer, happier, and more meaningful life. But to achieve the social binding benefits of the Sufi’s heart-synching practice, you don’t need to attend a dhikr or adhere to any religion at all. If group prayer, or walking barefoot over scalding coals, isn’t really your thing, similar states can be achieved simply by snuggling with a pet you love, going to a theater performance, or rapturously belting out your favorite songs with your friends this weekend. (Ideally in harmony.)

Setting resolutions for the new year means you think the future is up to you — but is it?
Thinking

Exorcism: The history of purging demons, from the New Testament to today

The gospels imply that Jesus became famous as much for his exorcisms as his ministry.
Up Next
The Present

The Nazis’ love affair with the occult

Why were the Nazis so enamored with the occult, pseudoscience, and magic?