Have you ever wasted an hour flicking through your phone and felt… hollow afterward? Have you had days when you’re so overworked that you feel you’ve ignored everyone and everything around you? Do you spend so much time worrying about getting that thing, or doing that job, that you feel detached from yourself?

We’ve built the world in such a way that there’s just so much to do. So many distractions and preoccupations. So many tasks and jobs. Life has become so complicated — we’ve got work to do, relationships to navigate, homes to manage, bills to pay, and families to care for. Technology was supposed to make all this easier, but it only seems to have added to our burden.

Have you ever stopped to wonder if something has been lost amongst all this? Have we buried something key to being human?

Cynicism doesn’t mean what you think

This is what the ancient Cynics believed. Cynicism as a philosophy bears only passing resemblance to how we use the term nowadays. Today, the word has come to mean someone who’s pessimistic and always sees or expects the worst in things, especially of people. We can see where this idea came from, but it’s a far cry from what the original Cynics believed.

Cynicism is most associated with a man called Diogenes of Sinope (but this comes only second-hand from Plato and Aristotle, because Diogenes’ own work largely has been lost). Cynics argued that the artificial trappings of civilization repressed, enslaved, and debased the human spirit. They despised all the abstracted philosophizing of the likes of Plato and his school, The Academy, thinking they were both pretentious and pointless. Instead, we should return to nature as much as possible, fulfilling only our basic needs. In fact, Diogenes was nicknamed “the dog” for his vagrant, sparse, and basic living conditions.

Cynics argued that we must abandon possessions and traditions and be more like animals, that is, by following base biological needs over everything else. Nature had made us just as we were designed to be, so why change that? Even what we might call negative things — like disease, pain or death — have their role to play, and we ought to live by nature’s way. To die and suffer is, after all, quite natural.

Cynicism as a philosophy bears only passing resemblance to how we use the term nowadays.

Cynicism is much more than having “no phone Sundays” or eating only soup for dinner. True Cynicism is far from easy. It is about “self-mastery,” and this took substantial practice, effort, and time. It means enduring and accepting longing or loneliness. Cynicism means abandoning all property, possessions, relationships, and society itself to focus instead on true inner strength.

Even the master, Diogenes, was taught a lesson in self-mastery. Diogenes had lived his life carrying a wooden bowl to eat and drink from. One day, on a walk, he saw a young boy bending to drink from a river with his hands. Distraught, Diogenes smashed his bowl to pieces shouting, “A child has beaten me in the plainness of living!” He had unwittingly become absorbed by the possession of his bowl. He needed to return to the natural way of things — using the hands with which he was gifted. 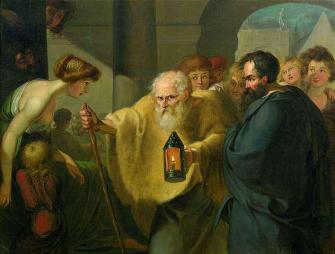 It was not enough to abandon society and live the hermit, ascetic life. Cynics saw themselves as being some kind of enlightened crusaders, whose duty it was to persuade others of how wrongly they were behaving. And so, they would lambast and abuse the “civilized” artifice of the Greek agora. They believed that they must aggressively take apart the soul-destroying trappings of “civilization.”

As you can imagine, this was not popular. The very term “Cynic” came to be a form of abuse — they were the “dog people.” Diogenes, himself, was known as “the mad Socrates” and it’s not hard to see why. It is said he once wandered the streets in search of an honest man.

But that’s not the only thing he did in the streets.

He once openly masturbated in the marketplace, proclaiming, “If only it were as easy to banish hunger by rubbing my belly.” He spat in official’s faces, threw rocks at locals, and slept in a barrel.

He quite hilariously mocked Plato’s Academy. The finest mind of the school had (probably jokingly, to be fair) declared that Man could be defined as a “featherless biped.” Diogenes then plucked a chicken, threw it onto the floor of the Academy, and declared, “Behold, I give you a man!” Seemingly unwilling to take a joke, the Academy added “with broad flat nails” to their definition.

One of his most famous stories involves Alexander the Great. Legend has it that Alexander was so impressed by this man called Diogenes, that he demanded to meet him. When he did, the most powerful man in the world offered Diogenes anything he wanted. Diogenes asked Alexander to move aside, because he was blocking the sun. 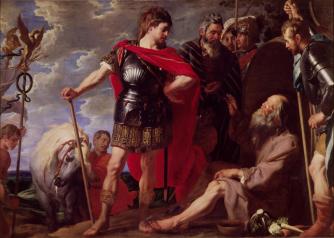 No, the wisdom of Cynicism is found in how it reimagines our relationship with society. We can all become so immersed in life, so distracted by those “must-do” things, that our humanity becomes entombed. We all can feel like we’re drowning in the very things that are supposed to make life happier or easier.

If you feel like you’re on a treadmill that is forever speeding up, Cynicism is the call to get off the treadmill — to say “no more” to everything and everyone that demands this or that. Cynicism is about throwing off the chains of needing pointless things.

In this way, Cynicism is a return to a simpler and more natural way of being human.

The fruits of long-term thinking will reveal themselves in five or ten or 30 years, when you’ve created the future you’ve always wanted.
Thinking

Reductionism is a successful way to explain the universe, but it cannot replace experience. This is part of the mystery of life.
Up Next
Life

Raccoons love you, but not unconditionally

Some wild animals thrive near humans, but only up to a point.