The great Greek poet, Hesiod, wrote, “Observe due measure; moderation is best in all things.” It’s a wisdom that finds support across all ages, stages, and aspects of life. Drinking water is a good thing, but drinking too much is dangerous. A shot of vodka won’t kill you, but a gallon probably will. Working hard is good, but burning yourself out is not. Being nice is great, but a sycophant is creepy. Moderation in all things.

But, it’s not always easy to determine where that line falls, and a great example of this concerns property and wealth.

Most of us agree that owning things, or at least having the right to own things, is good. It’s okay to buy a phone, to own a car, or to have your own clothes. But equally true is that most people feel uneasy about a world which has both billionaires in vast mansions as well as children dying malnourished. Greed, avarice, envy, and venality are considered vices. To be obsessively driven for material things is still, in the main, considered to be either misguided or, at its worst, utterly immoral. So, when does wealth become greed?

John Locke and the philosophy of property 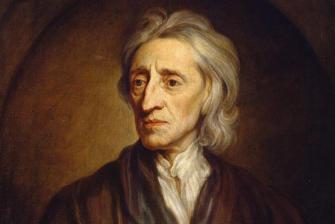 It’s hard to pinpoint exactly when humans first called a thing “mine,” but the philosophy and law of property is much easier to track. One of the biggest names to consider the issue was the 17th century English philosopher John Locke.

Locke’s political philosophy is famously cited as a major influence on the U.S. Declaration of Independence but also fed heavily into the French Revolution and the Great Reform movements of Britain. His work on property is perhaps one of his most important contributions.

Although subject to a fair bit of debate — what isn’t in philosophy? — it’s generally accepted that Locke adopted a “fair usage” view of property. He argued that one can hold any property that meets the following criteria:

But, there’s a lot of ambiguity in these rules, and money rather changes things. Money, especially modern money in the form of digital numbers on a screen, does not spoil. And, thanks to modern banking, there is no limit to the amount of money there could be — a bank can, and does, literally create money each time they give you a credit card or a loan (although, in practice, few countries allow this and place limits on money creation). So, no matter how many billions someone creates, there will always be “good and enough” money for others, too.

(Of course, in practice, constantly creating huge new pools of money will lead to hyperinflation, devaluing the money for everyone. Yet, even if we were to ban all new money creation today, a Lockean could argue that there’s more than enough already for a generous distribution around the world.)

So, money changes things for Locke’s account. It won’t spoil and there will always be at least some money for everyone else. It’s even been argued that Locke, far from advocating an equal and distributive philosophy, can easily support rampant capitalist accumulation of wealth. Locke wrote that, because of money, “Now one man could have… a disproportionate and unequal possession of the earth… and fairly possess more land than he himself can use.”

It’s the philosophy of greed.

The idea that greed is an essential part of being human (or at least an animal) goes back at least to Plato and has a rich philosophical history from there. Today, it often takes the form of evolutionary psychology or genetics, exemplified by Richard Dawkins’ The Selfish Gene.

It’s when we think of little else than increasing our experiences and material possessions. This is the point at which greed has come to dominate your life.

One thinker who has challenged this is Peter Singer. Singer acknowledges the fact that evolution does work on a certain competitiveness, that is, the fittest will pass on their genes. But he also believes that it’s wrong to associate this wholly with greed or selfishness. Cooperation and productive relationships are just as vital to survival.

Singer argues that the desire to do good, to work hard, and to succeed are admirable parts of the human condition, but when they are taken to excess, they turn into greed. That line comes when the want of more — particularly, the desire for material wealth — becomes the sole focus of a life. It’s when working late or constantly looking for that promotion is prioritized over family, friends, and common human compassion.

The fact is that, in the West, most people have enough. Even poor people generally have TVs, smartphones, and automobiles. The average person in the West lives far better than royalty did for millennia. Singer asks us to get a sense of perspective. We spend more on bottled water than some families in developing countries live off for a day. We’re so fixated on our current day-to-day condition, that we lose sight of how much we really have.

Singer’s argument helps us identify the point at which drive and success insidiously morph into greed: It’s when we are loath to spend our money and devote all of our waking lives to determinedly accumulating more and more at the expense of our relationships. It’s when we think of little else than increasing our experiences and material possessions. This is the point at which greed has come to dominate your life.

But it’s also when greed replaces our common sense of compassion. It’s when property and wealth become virtues greater than charity, kindness, and solidarity with others. It’s when dollar signs and fast cars matter more than people dying in the street. It’s when getting a pay raise matters more than someone else getting fired.

Nobody likes to think of themselves as greedy, but if you examine yourself closely, you will probably find some aspects of your life that are at least tainted by greed. We should all check ourselves from time to time.

Why, exactly, should you die for your child?
The Well

Reframing life in terms of death reveals some of the biggest philosophical problems with how we think about living systems.
Up Next
The Future

This programmable fiber has memories and can sense temperature

Researchers were even able store and read a 767-kilobit full-color short movie file in the fabric.