Toru Okada is having trouble finding his missing cat, so his wife sends him out on a journey. Toru meets May Kasahara while walking around his neighborhood. The teenage girl shows him an abandoned house where stray cats congregate; the house contains an empty well that Toru climbs into to think. The well, it turns out, is a portal to another dimension. Engulfed in darkness, he connects to an intimacy of his own thoughts impossible in the world above. He emerges transformed.

The portal is a repetitive theme in the history of literature. Haruki Murakami used it to great effect in The Wind-Up Bird Chronicle, though he was only retelling an introspective narrative that forms the basis of mythology: a cave shadow, knights entering the dark forest, the shamanic descent into the underworld. The story is the medicine; the healer returns bearing the gift of imagination.

Last week on the Joe Rogan Experience, mathematician and economist Eric Weinstein revealed his latest project: The Portal, a new podcast about the recurring story of transformation told throughout the generations:

“It was always the same: somebody is trapped in a humdrum existence in an ordinary world, until some sort of magical portal accidentally or on purpose, enters their life. Either they go through a wardrobe, they go through a rabbit hole, looking glass, platform nine and three quarters, or Dorothy famously was used to introduce Technicolor.”

Few can forget Judy Garland landing in Oz after a tumultuous tornado carries her away from Kansas. A magical opening of the portal door offered the world a glimpse of Technicolor. The visual manifestation of this technological advance in film revealed a longtime assumption of the imagination: another reality is possible. Once crossing the threshold, Dorothy would never again be the same.

This threshold is an essential component of identity. Storytelling binds individuals within societies. Sir James George Frazer initially wrote The Golden Bough, published in 1890, as a critique of “primitive” religions, yet his wide-ranging survey of rituals kickstarted the field of comparative mythology. Around the same time, Theosophists attempted a similar synthesis of mystical ideologies, albeit with racist and anti-Semitic leans.

The Romanian scholar, Mircea Eliade, picked up on Frazer’s work, scouring global texts on shamanism, yoga, dreams, and the “eternal return,” the latter contemplated in varying forms by Pythagoras, Nietzsche, and Albert Camus: humans are engaged in a self-repeating process across infinite time. The stories we tell reflect this repetition.

No one introduced this theory to as broad a population as Joseph Campbell, whose four functions of mythology describes the framework: the hero enters a portal (often through trauma or another life-altering experience); the hero embarks on an epic journey; during the journey, the hero learns a lesson; finally, the hero returns home to share this knowledge with their community.

If the hero doesn’t learn the lesson, they are likely to repeat the journey. The stories that make the page are usually vetted so such a faux pas doesn’t occur. Before setting off on his trials, Gilgamesh was a cruel ruler, raping the women in his kingdom on their wedding night and beating up grooms for sport. After he attains eternal life, and then loses it, he softens. His best friend, Enkidu, has been murdered. Gilgamesh learns compassion. The narrative relies on the transformation of his governance. Otherwise, the journey would have been for naught.

The goal of the Weinstein’s podcast is to discover why we repeat the same story, over and again, with different characters playing out the same themes. As he says, “The portal becomes the call to adventure.” Function one in Campbell’s framework: Dorothy opens the door. What next? 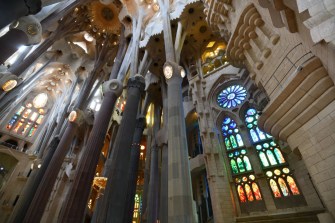 To cross the threshold, one must willingly step, a process Weinstein believes shifts when transitioning from child to adult. Watch a child attempt a handstand: no fear. Ask an adult to do the same, and unless they’re specifically training for it, you’re likely to be pelted with a thousand excuses. A similar avoidance occurs in our imagination. As Weinstein says,

“I came to believe this story is an unkept promise for most people, who in their adult lives, they don’t find these portals…We learn to stop looking for the portal. What I think I do differently than most people is I became obsessed with exits. That there are other worlds, and they’re real.”

The threshold is available to anyone at any age. Weinstein discusses Sagrada Familia, the perpetually under-construction Roman Catholic church in Barcelona. Antoni Gaudi’s masterpiece might never be finished; Weinstein is not sure anyone alive can execute the totality of the Catalan architect’s vision. Yet here is a portal come to life, an imagination unshackled, the possibility of infinite stories being told inside of the world’s most stunning house of worship.

These are the stories Weinstein plans on exploring with The Portal. He’s also homing in on one particular trait sorely missing from so many narratives in our world today: hope.

“People want something richer and more amazing for their lives…People need more meaning. With all the rationality, with all the mystery we’ve taken out of the world, it’s time to put a ton of it back in.”

Millions of people have had a near-death experience, and it often leads them to believe in an afterlife. Does this count as good proof?
The Well

Mathematics and religion both embody awe-inspiring, eternal truths.
Up Next
Health

A new study found a positive association between sugary drinks and cancer.