Shortly after Alan Watts’s death in 1973, his eldest daughters, Joan and Anne, began collecting boxes of his letters and correspondences. Though it took decades to publish, The Collected Letters of Alan Watts adds yet another piece to the vibrant extant literature of the great British philosopher and orator. Having recently met Joan at a conference and picking up this latest book, I decided it was time to thumb through the rest of my collection.

Watts’s bibliography is extensive, with as many volumes published posthumously as during life, most based off his exhaustive catalog of talks. He was an early interpreter of Eastern texts for Western audiences, not only in offering simple translations. Watts captured the essence of mythologies and scriptural narratives, retelling them in a language rapt audiences could easily digest (and sometimes not so easily; he wasn’t a mere popularizer).

As interesting and penetrating as his books are, he truly shone on stage (often, incredibly, after enjoying a bottle of whiskey). Since I discovered his work a quarter-century ago I’ve constantly turned back to him when I need a bit of insight, especially the type that arrives with a touch of humor. The below list are a few I picked out during a recent afternoon reminiscing on the man and his extraordinary life.

What If Money Was No Object? – Alan Watts

All our efforts at a spiritual life are prompted by self-interest. — Behold the Spirit (1947)

If we are citizens of this world, and if there can be no final satisfaction of the soul’s discontent, has not nature, in bringing forth man, made a serious mistake? — The Wisdom of Insecurity (1951)

The transience from which we seek liberation is the very liberator. — Nature, Man and Woman (1958)

Psychotherapy and liberation are completed in the moment when shame and guilt collapse, when the organism is no longer compelled to defend itself for being an organism, and when the individual is ready to own his unconscious behavior. — Psychotherapy East & West (1961) 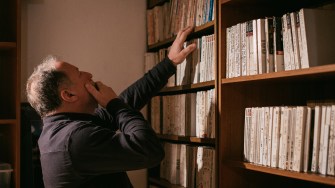 To idolize scriptures is like eating paper currency. — The Book: On the Taboo Against Knowing Who You Are (1966)

Human life—and all life—does not work harmoniously when we try to force it to be other than what it is, for the very simple reason that this is based on the assumption that I, who would control things, am something apart from what I would control. — Cloud-Hidden, Whereabouts Unknown (1968)

The world of myth is past, is “once upon a time,” in a symbolic sense only—in the sense that it is behind us, not as time past is behind us, but as the brain which cannot be seen is behind the eyes which see, as behind memory is that which remembers and cannot be remembered. — Myth and Ritual in Christianity (1968)

The supposition that knowing requires a knower is based on a linguistic and not existential rule, as becomes obvious when we consider that raining needs no rainer and clouding no clouder. — Tao: The Watercourse Way (1975)

Very often it seems to me that faith and belief could be opposed. Belief comes from the Anglo-Saxon root lief, which means to “wish.” Belief is the fervent hope that certain things are true. Whereas I rather feel that faith is an openness of attitude, a readiness to accept the truth, whatever it may turn out to be. It is a commitment of oneself to life, to the universe, to one’s own nature as it is, in the realization that we really have no alternative. — Zen and the Beat Way (1997)

A group of prominent scientists shares how research has changed them.
Strange Maps

Report: 80% of Americans are insufficiently active

Four out of every five American adults and children are not moving enough.