What Will Your City Look Like in 1,000 Years? Jonathon Keats’ Millennium Camera 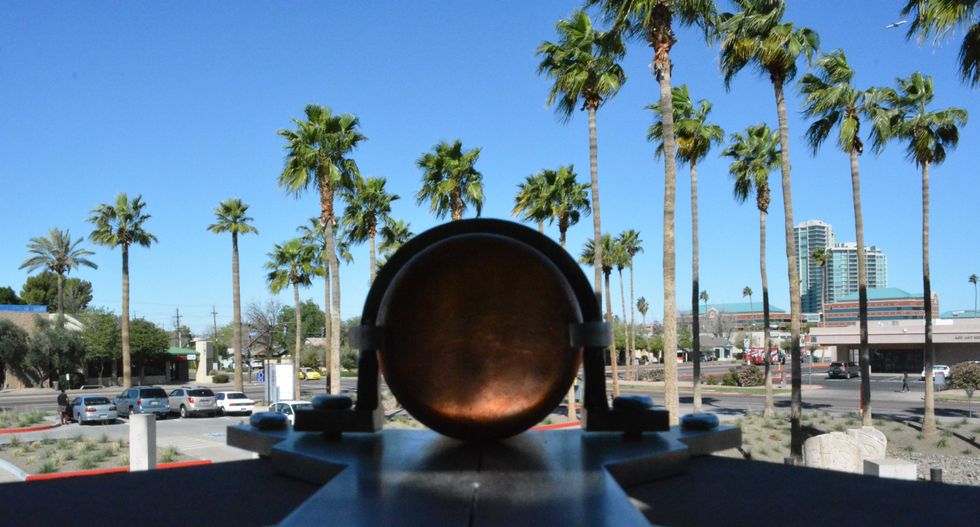 Using a highly durable pinhole camera, Keats (well, his camera anyway) will document the changes in the skyline of Tempe over the next millennium. The project is sponsored by the Emerge Festival and Arizona State University Art Museum and will (we hope) culminate in an exhibition 1,000 years from now. If physical universities still exist in 3015, and if the camera is not destroyed by rampaging robots constructed by other robots that have long since acquired autonomous intelligence, it will provide our descendants a glimpse backward into “deep time.” Keats hopes that it will give them some perspective on how quickly and radically our cities change, often under our very noses and at the hands of a few ambitious developers and politicians.

Living as we do in a world that records everything, yet seems to have an increasingly limited memory, we can take Keats’ experiment as a reminder that even over massive time scales, some things endure.

I asked Jonathon a few questions about his farsighted experiment:

1) Do you have any expectations about what the Tempe image will show if it survives? Will it all be bad news?

Tempe is largely a product of population growth in Phoenix, and it's representative of both the promise and the perils of urban expansion throughout the United States. One of the foremost questions of our time is whether cities can make civilization sustainable, and how populations can be optimally distributed for efficient and equitable use of resources. The question is especially pressing in the American Southwest. Growth is constrained by the availability of water, and the availability of water is likely to destabilize with the climate. So I believe that Tempe provides a good vantage to scrutinize urbanization now and in a thousand years. It's a good place to examine our expectations about city life.

That said, urbanization is not the only worthy subject for a millennium-long photograph. For that reason, my deep-time photography is by no means limited to Tempe. At Amherst College next month, I'll place a second millennium camera in a spire overseen by the Mead Art Museum, providing a thousand-year view of the Holyoke Mountain Range, recording how our changing climate impacts natural habitat.

In a thousand years, these photographs may provide our great-great-grandchildren's great-great-grandchildren with evidence of our role in the decimation of the environment and the collapse of civilization. Alternately, the fact that we're being held accountable can help instill a sense of responsibility sufficient to overcome our present-day complacency. So I can't say whether it will be all bad news, all good news, or a mixture of the two. Today the image inside each of the millennium cameras is blank. Through our actions, we can decide how the pictures will develop.

Well, it started out at a hundred years. The first instantiation of my deep-time photography was in Berlin last summer. Working with a local arts organization called Team Titanic, I manufactured 100 pinhole cameras, each with a century-long exposure time. Anyone in the city could take a camera in exchange for a 10-euro deposit, refundable in a century. Berliners hid the cameras in their neighborhoods. Eventually they'll reveal the cameras' whereabouts to children, who will be the ones to retrieve the cameras for a 2114 exhibition of the city in transformation.

With my century camera, I deliberately made the duration of the exposure longer than a human lifespan: The audience will be those not yet born — the people most impacted by what we do to the world, with the least influence over our choices. The millennium camera exponentially extends the timespan to a degree that we cannot even fathom the people or the civilization at the far end. Yet, as with the century cameras, I intend the millennium camera also to be experienced by those alive today. The experience will not be visual, but conceptual. The process of seeing change will be internalized, prompted by the awareness that we're being watched.

Deep time is geological time, a timeframe that's imperceptible to us because it's exponentially more expansive than the human lifespan. Yet it's highly relevant to our lives because our actions today can deeply affect the far future of our planet. (Our technology is as forceful as planetary geology.) So it's essential that we make deep time experiential — even participatory — and that we're able to see our activities in the context of the next thousand years or more: to see ourselves from the perspective of the far future.

3) What advice would you give me if I wanted to do my own personal millennium camera project in my own town or city?

If I may, allow me to start by discussing the century camera. Anyone can easily make a century camera and place it in the city or town where they live. You can make one out of an old biscuit tin or beer can. All you have to do is place a sheet of black paper opposite a pinhole puncture, seal the lid against light leaks, and remember where you hide the camera. Over time, the paper will gradually fade, preserving the image projected through the pinhole. The technology is completely open source and free for anyone to adapt.

That said, I think we can be much more ambitious. What would happen if the century camera were a birthright, and every child received one? Mass-produced in cardboard, these cameras could be made very inexpensively, perhaps for less than a tenth of a cent apiece, and they could be freely distributed by UNESCO, which could also host a rolling global exhibition of the photos. Every day, starting 100 years from now, a new worldwide deep time panorama would be revealed.

If it's spatiotemporally possible for you, catch these upcoming events with Jonathon Keats: