The video conferencing platform Zoom has become wildly popular as millions of people have switched to remote work during the COVID-19 pandemic. The platform offers high-quality streaming, an easy-to-use interface, and end-to-end encryption (E2E), which scrambles data so that it’s decipherable only to the sender and receiver. In theory, end-to-end encryption would prevent the government, internet providers, and even Zoom itself from eavesdropping on users’ meetings.

But a new report from The Intercept shows that Zoom’s audio and video meetings don’t seem to actually support end-to-end encryption, at least as that term is commonly defined.

“Currently, it is not possible to enable E2E encryption for Zoom video meetings,” a Zoom spokesperson told The Intercept. “Zoom video meetings use a combination of TCP [Transmission Control Protocol] and UDP [User Datagram Protocol]. TCP connections are made using TLS [Transport Layer Security] and UDP connections are encrypted with AES [Advanced Encryption Standard] using a key negotiated over a TLS connection.”

In other words, Zoom does encrypt video meetings, but it does so through transport encryption. This means Zoom has the ability to access users’ private meetings. One concern among privacy advocates is that the government could someday compel Zoom to hand over recordings of users’ meetings, which were advertised as being encrypted end to end. 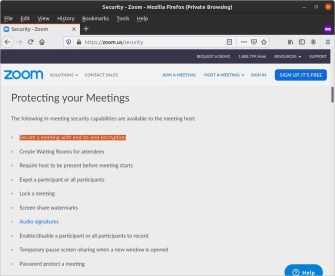 Speaking to The Intercept, a Zoom spokesperson described the platform’s definition of “end to end”:

“When we use the phrase ‘End to End’ in our other literature, it is in reference to the connection being encrypted from Zoom end point to Zoom end point…The content is not decrypted as it transfers across the Zoom cloud.”

Although Zoom might not decrypt data as it transfers across the platform’s cloud, it certainly has the ability to do so. “They’re a little bit fuzzy about what’s end-to-end encrypted,” Matthew Green, a cryptographer and computer science professor at Johns Hopkins University, told The Intercept. “I think they’re doing this in a slightly dishonest way. It would be nice if they just came clean.”

In a recently published open letter, the human rights group Access Now called on Zoom to publish a transparency report that includes the following information:

Zoom is also facing criticism for passing user data on to third parties. Last week, Motherboard published a report showing that the Zoom iOS app was sharing user data with Facebook — even if Zoom users didn’t have a Facebook account. On Monday, a Zoom user filed a class-action lawsuit against the company, alleging:

“Upon installing or upon each opening of the Zoom App, Zoom collects the personal information of its users and discloses, without adequate notice or authorization, this personal information to third parties, including Facebook, Inc. (“Facebook”), invading the privacy of millions of users.”

Looking for a video-conferencing platform that does offer end-to-end encryption? Consider looking into Microsoft Teams, Signal, Clickmeeting, and Wire.

Tags
cybersecurityinternetprivacysecuritytechnology
In this article
cybersecurityinternetprivacysecuritytechnology
Related
Why geniuses hunt demons for sport
Jimena Canales shares the “demons” that shaped computer science.
▸
6 min
—
with
Jimena Canales
Videos
NASA astronaut explains humanity’s trajectory to Mars
The first human that isn’t an Earthling could be in our lifetime.
▸
5 min
—
with
Robert Curbeam
The Well
Michio Kaku: 3 mind-blowing predictions about the future
What lies in store for humanity? Theoretical physicist Michio Kaku explains how different life will be for your descendants—and maybe your future self, if the timing works out.
▸
with
Michio Kaku
The Well
Time travel is possible. Can we go back?
Theoretical physicist Brian Greene explores the potential particles of time and why we could, in theory, travel forward in time but not back.
▸
with
Brian Greene
10% of people are dominating social media. What if the other 90% spoke up?
Social media isn’t the majority – it’s the vocal fringe.
▸
with
Todd Rose
Up Next
Health
How COVID-19 might help us win the fight against climate change
The response to the pandemic illustrates five actions we can take to address the global climate change crisis.