There’s no shortage of stories about young, hyper-successful entrepreneurs. From the Forbes’ 30 Under 30 lists to films like “The Social Network”, these stories offer an alluring blueprint for early success: dream huge, work hard, and soon enough you too can get filthy, tech-titan rich.

You’re less likely to hear the more common story: a young entrepreneur starts a new business, accrues debt, runs out of luck, gets demoralized and then, reluctantly, takes on a regular job. What explains the frequency of these crash-and-burn stories? It seems the problem doesn’t lie in the pursuit of entrepreneurism, but rather in the age at which entrepreneurs start launching businesses.

That’s the takeaway of a recent study that found the mean age for the 1-in-1,000 fastest growing new ventures to be 45 years. This finding held true across “high-technology sectors, entrepreneurial hubs, and successful firm exits.” So, although conventional thinking tends to paint the young generation as uniquely creative innovators and (sorry in advance) Big Thinkers, it seems that older generations are more likely to possess traits that facilitate entrepreneurial success.

“We find that age indeed predicts success, and sharply, but in the opposite way that many propose,” the researchers wrote. “The highest success rates in entrepreneurship come from founders in middle age and beyond.” 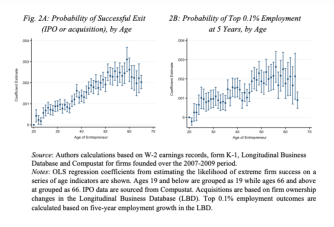 The basic idea behind this age-success relationship is that people tend to accumulate skills, resources and experience with age. However, the findings did reveal some caveats:

“Overall, we see that younger founders appear strongly disadvantaged in their tendency to produce the highest-growth companies. That said, there is a hint of some interesting age thresholds and plateaus in the data. Below age 25, founders appear to do badly (or rather, do well extremely rarely), but there is a sharp increase in performance at age 25. Between ages 25 and 35, performance seems fairly flat. However, starting after age 35 we see increased success probabilities, now outpacing the 25-year-olds. Another large surge in performance comes at age 46 and is sustained toward age 60.”

To dream or not to dream?

So, what’s the lesson for young, prospective entrepreneurs? It’s not to stop dreaming big. But maybe it’s wise to start dreaming more strategically — to broaden the definition of entrepreneurism to include more low-cost, low-risk paths, like carving out entrepreneurial opportunities within your current job. That way, you can accumulate more of the experience and skills that’ll help to fortify your entrepreneurial pursuit when the time comes.

The findings on age and success also imply that young entrepreneurs shouldn’t fall into the trap of comparing themselves to the outlier young-success stories — the Zuckerbergs, Musks and Gates’ of the world.

“We should stop lying to young people about commerce and tell the truth that business is hard,” Jeffrey A. Tucker wrote in an article for the American Institute for Economic Research. “Work is hard. Saving money is hard. Serving customers is hard. For some people, just showing up is hard. These are all learned skills. The fun comes once you master them.”

Research shows that those who spend more time speaking tend to emerge as the leaders of groups, regardless of their intelligence.
Neuropsych

A new episode of “Your Brain on Money” illuminates the strange world of consumer behavior and explores how brands can wreak havoc on our ability to make rational decisions.
Up Next
Starts With A Bang

When a black hole and a companion star orbit one another, the star’s motion will change over time owing to the gravitational influence of the black hole, while matter from […]