In virtually all countries in the world, women tend to be more religious than men. In the U.S., recent surveys show a sizeable 12-point difference between the genders in terms of religiosity. What explains the gap?

A new study published in The Journal for the Scientific Study of Religion suggests one factor is that men are more likely to take risks. Here’s how study author John P. Hoffmann, a professor of sociology at Brigham Young University, explained the connection between risk preferences and religiosity to Psy Post:

“…We recalled that, long ago, the philosopher and mathematician Blaise Pascal had proposed that believing in God was a risk-avoidant strategy and not believing was risky [a proposition described by the philosophical argument Pascal’s Wager]. We then married the ideas that women are more religious than men, men are usually greater risk takers than women, and religious involvement may be a risk avoidant life strategy to hypothesize that risk preferences might account for at least some of the gender difference in religious beliefs and behaviors,” Hoffmann explained.

It’s a theory Hoffmann first put forth in 1995 with a paper titled ‘Risk and religion: An explanation of gender differences in religiosity‘, the key takeaway of which was that “once preferences for risk are considered, the well-known gap in religiousness between females and males dissipates.” However, subsequent studies had failed to replicate his results, likely due to errors in methodology, Hoffman said.

The new study on risk-preference theory was an attempt to replicate and potentially extend those initial results. For the study, Hoffmann examined data from the 2015 Monitoring the Future study, the 2010 National Survey of Drug Use and Health, and the 2005 National Survey of Youth and Religion. These sources recorded the risk preferences, religiousness and demographic variables of 22,745 American adolescents.

After comparing the data, the results showed that men were more willing to take risks, while women were more likely to be religious. What’s more, the gap between male and female religiousness nearly disappeared when risk-taking served as a control variable.

“One takeaway of these studies is that one of the reasons, but certainly not the only reason, that young men are less involved in religion than young women is because they are more likely to say they like to take risks. Thus, those interested in understanding why some people are more religious than others may wish to consider not only their core beliefs and life experiences, but also their tendency to behave in a risky manner,” Hoffman told PsyPost.

Hoffman cautioned that the study doesn’t prove that risk-taking preferences fully explain the gap in religiosity between men and women, and that the study only focused on young people.

“The study found a modest statistical association between gender, risk preferences, and a few measures of religious belief and involvement,” Hoffman said. “But it is clear that there are many other factors that affect individual involvement in religion and that might account for any of the gender differences. Whereas this study makes a small contribution to unveiling gender differences in religion, researchers would be wise to focus on characteristics that have a more dramatic influence.” 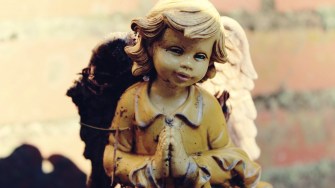 ​What else explains the religiosity gender gap?

As sociologists Omar Lizardo and Jessica L. Collett once wrote, the religiosity gender gap is still “a genuine scientific puzzle.” Most explanations argue that either nature or nurture is responsible for the gap. As a recent Pew Research Center article notes, that’s a debate that’s likely not going to be settled anytime soon.

“The “nature” theories that focus on physical, biological or genetic differences between men and women have not found a measurable factor that has been definitively linked to greater religiosity. And the “nurture” theories that pinpoint social factors as the principle mechanism in explaining the religious gender gap all face a problem: Despite the vast social changes and gender role transformations of recent decades, the religious gender gap persists in many societies.”

Like most human phenomena, the answer probably involves a synthesis between the two, as Reverend D. Paul Sullins, a researcher at the Catholic University of America, once said, “greater insight into gender differences in religiousness lies … in the acceptance of complexity.”

Tags
genderpsychologyreligionsociology
In this article
genderpsychologyreligionsociology
Related
The Present
What’s effective altruism? A philosopher explains
Some effective altruists “earn to give” — they make as much money as they can and then donate most of it to charities.
Neuropsych
Memory and the benefits of forgetting
Forgetfulness isn’t always a “glitch” in our memories; it can be a tool to help us make sense of the present and plan for the future.
The Learning Curve
5 Stoic quotes to help you through difficult times
“We suffer more often in the imagination than in reality.”
The Past
The Wild West was lawless and chaotic — and the police helped keep it that way
Lawmen and outlaws were often the same people.
Stoicism: How to turn your sadness into strength
Chloé Valdary shares the ancient Stoic principle that can defeat modern despair.
▸
7 min
—
with
Chloé Valdary
Up Next
The Present
Proposed carbon tax plan would return proceeds to people once goals are met
It could put the American fossil fuel industry on a clear path to extinction.