Construction of Titanic II is reportedly resuming following a years-long financial dispute. The Australian-based company behind the project, Blue Star Line, recently announced that Titanic II’s building hasn’t just recommenced, but that it also has plans to relocate to Paris, where it will begin recruiting “additional” employees.

“The ship will follow the original journey, carrying passengers from Southampton to New York,” said Clive Palmer, the billionaire businessmen behind the project, in an interview with MSN. “She will also circumnavigate the globe, inspiring and enchanting people while attracting unrivaled attention, intrigue and mystery in every port she visits.”

The ship is supposed to be an exact replica of the original Titanic, which famously fell to the bottom of the Atlantic amid its maiden voyage. Unlike the original ship, however, Titanic II will have a welded hull, modern navigational technology and a surplus of lifeboats. The estimated costs to resurrect the Olympic-class ship? Roughly $500 million. Since the company intends to replicate the original ship as closely as possible, it’s poised to carry more than 3,000 people.

Though there’s been press releases sent out by the company, and multiple media outlets have been parroting the words within them, the project’s long delay may suggest it’s a flop. Nevertheless, let’s look into the history of this wayward endeavor. Is it more than hubris mingled with a dreamy, misplaced romancing of a century-old catastrophe? 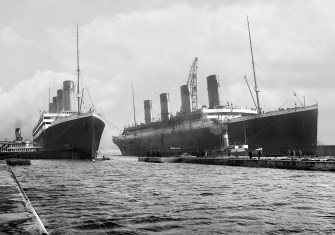 Is Titanic II actually being built?

On September 27, 2018 the Blue Star Line company announced on their website that the project would recommence. This is the first anyone had heard of anything in any official capacity from the website — it had not been updated since May of 2014. Blue Star Line has also not been active on any other projects in the interim.

Currently, there is no information on ticket pricing or when they’ll be available.

The last time the Titanic II was slated for construction, it had worked out an agreement with state-owned Chinese company: CSC Jinling. If that agreement is still in place then it should be expected to be built in their shipyard in Nanjing China.

Announced on October 22nd 2018, Palmer said that Blue Star Line would be establishing a headquarters in Paris, rather than the United Kingdom, next year in order to avoid any problems with Brexit.

Titanic II’s maiden voyage would be a two week excursion from Dubai to the United States. On one leg of this journey, it’s planned to retrace the original route the 1912 ship took on its ill-fated journey. After that, Titanic II will go around the world embarking on other routes.

The new sail date is sometime late in 2022 according to Cruise Arabia. That would be around 110 years before the original Titanic foundered. Again, there are also no official sailing dates scheduled either.

Looks like Titanic II will be sailing on hot air

First announced in 2012 and with an original launch date of 2016, Palmer’s original impetus for the idea came from a request from Chinese shipbuilders looking to enter into the cruise ship market. Speaking with an Australian magazine that year, he said, “Let’s build the Titanic! It will be great, it will show off the competitiveness of Chinese shipbuilders.”

Deltamarin, a Finnish ship-design company and CSC Jinling Shipyard together would be the ones tasked with bringing the 1912 ship back to life. Yet, so far the only thing to come out of this endeavour in nearly a decade has been Palmer’s designs, a couple of launch parties and a few thousand Titanic-themed dish sets.

In 2014, information leaked to The Australian asserted that no actual construction progress was ever started. The article stated that:

“Dozens of workers at the shipyard said they had been informed of the Titanic II plans, but the project was yet to be given the formal go-ahead. ‘That ship was just a proposal. It’s never been carried out and the project has never launched,’ one worker was quoted as saying.'”

Because of this, and the project’s delay, confidence in its completion is sparse. In other Titanic-related news, however, this vision to resurrect the 1912 ship might be realized elsewhere, albeit in a less mobile form.

Landlocked in the Sichuan province, Chinese investors are vying to create a stationary Titanic replica as the centerpiece of the Romandisea Seven Star Resort. This project isn’t without its fair share of problems either.

Su Shaojun, CEO of the lead investment group, originally said that the project was poised to be completed by the end of 2017. On-site assembly, however, did not begin until late 2016. The new launch date is projected to be sometime in 2019. In the meantime, the project has encountered financial problems as steel prices have increased. On top of this, the resort hotel complex, as a whole, is behind schedule. All of that said, the project has now been put on hold and there is no word when construction will resume.

Perhaps these misfortunes and assorted hangups should be a warning to these Titanic investors… sometimes it’s better to just let sunken ships lie in peace.

Think of a combination of immersive virtual reality, an online role-playing game, and the internet.
Strange Maps

Americans don’t like to ride the bus. There are ways to fix that.
Up Next
Neuropsych

What are we like? 10 psychology findings that reveal the worst of human nature