How do you decide if a government program is doing well? Do you look at how many people it helps? Do you consider its efficiency? Perhaps it has a particular gauge limited to its focus area that can be used? If you use that unique gauge, then how do you compare it to other programs?

The problem of how to properly review government programs and compare their outcomes has bedeviled analysts for years. In many cases, they’ll consider a handful of programs with a particular metric while another person will review different programs using another one. One comprehensive review using a single, widely applicable, and easily compared benchmark was lacking.

That is exactly what one group out of Harvard aimed to create when they reviewed more than 100 major welfare programs with a single metric.

The study, carried out by Nathaniel Hendren and Ben Sprung-Keyser of Harvard University, reviews 133 welfare programs through a single lens. The authors measured these programs’ “Marginal Value of Public Funds” (MVPF), which is defined as the ratio of the recipients’ willingness to pay for a program over its cost.

A program with an MVPF of one provides precisely as much in net benefits as it costs to deliver those benefits. For an illustration, imagine a program that hands someone a dollar. If getting that dollar doesn’t alter their behavior, then the MVPF of that program is one. If it discourages them from working, then the program’s cost goes up, as the program causes government tax revenues to fall in addition to costing money upfront. The MVPF goes below one in this case.

Lastly, it is possible that getting the dollar causes the recipient to further their education and get a job that pays more taxes in the future, lowering the cost of the program in the long run and raising the MVPF. The value ratio can even hit infinity when a program fully “pays for itself.”

While these are only a few examples, many others exist, and they do work to show you that a high MVPF means that a program “pays for itself,” a value of one indicates a program “breaks even,” and a value below one shows a program costs more money than the direct cost of the benefits would suggest.

After determining the programs’ costs using existing literature and the willingness to pay through statistical analysis, 133 programs focusing on social insurance, education and job training, tax and cash transfers, and in-kind transfers were analyzed. The results show that some programs turn a “profit” for the government, mainly when they are focused on children: 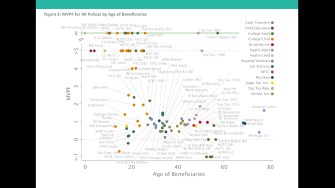 This figure shows the MVPF for a variety of polices alongside the typical age of the beneficiaries. Clearly, programs targeted at children have a higher payoff. Nathaniel Hendren and Ben Sprung-Keyser

Programs like child health services and K-12 education spending have infinite MVPF values. The authors argue this is because the programs allow children to live healthier, more productive lives and earn more money, which enables them to pay more taxes later. Programs like the preschool initiatives examined don’t manage to do this as well and have a lower “profit” rate despite having decent MVPF ratios.

On the other hand, things like tuition deductions for older adults don’t make back the money they cost. This is likely for several reasons, not the least of which is that there is less time for the benefactor to pay the government back in taxes. Disability insurance was likewise “unprofitable,” as those collecting it have a reduced need to work and pay less back in taxes.

Firstly, it shows that direct investments in children in a variety of areas generate very high MVPFs. Likewise, the above chart shows that a large number of the programs considered pay for themselves, particularly ones that “invest in human capital” by promoting education, health, or similar things. While programs that focus on adults tend to have lower MVPF values, this isn’t a hard and fast rule.

It also shows us that very many programs don’t “pay for themselves” or even go below an MVPF of one. However, this study and its authors do not suggest that we abolish programs like disability payments just because they don’t turn a profit.

Different motivations exist behind various programs, and just because something doesn’t pay for itself isn’t a definitive reason to abolish it. The returns on investment for a welfare program are diverse and often challenging to reckon in terms of money gained or lost. The point of this study was merely to provide a comprehensive review of a wide range of programs from a single perspective, one of dollars and cents.

The authors suggest that this study can be used as a starting point for further analysis of other programs not necessarily related to welfare.

It can be difficult to measure the success or failure of a government program with how many metrics you have to choose from and how many different stakeholders there are fighting for their metric to be used. This study provides us a comprehensive look through one possible lens at how some of our largest welfare programs are doing.

As America debates whether we should expand or contract our welfare state, the findings of this study offer an essential insight into how much we spend and how much we gain from these programs.

Soviet researchers studied crime through a Marxist-Leninist lens. Under Lenin, a humanitarian approach to criminality briefly emerged, but dissipated when Stalin rose to power.
Up Next
Starts With A Bang

What’s Left Behind When You Boil A Gas Giant?

When large, massive, gas giant exoplanets come too close to their parent star, the outer gas envelope can be mostly or entirely stripped away. What remains might be an exposed […]