If you’ve ever driven down an interstate highway in the American South, you have undoubtedly seen it: 11 yellow squares each containing a letter to spell “Waffle House.” It can be 4:00 in the morning, and you can reliably walk into a Waffle House and order cheap, tough-to-screw-up eggs and bacon, and get a cup of coffee to keep yourself awake while on the road. It’s a pit stop, a diner, a cultural icon, and — surprisingly — a staple of disaster management.

The Federal Emergency Management Agency (FEMA) has a lot of ways to assess the severity of a natural disaster. For tornadoes, there’s the Fujita scale, the Mercalli scale for earthquakes, and the Waffle House index for pretty much anything.

Waffle Houses are almost always open. It’s part of their charm. And it’s for this reason that they can be used to measure the severity of, say, a hurricane. “Yeah, we’re a little-bitty 24-hour short-order cook place, and that’s what people see us as,” said Waffle House spokesperson Pat Warner. “And that’s one of the reasons we strive to come back quickly after a storm — ’cause we want to have that place where people can gather and talk about the storm over eggs and bacon and check in on their neighbors.” 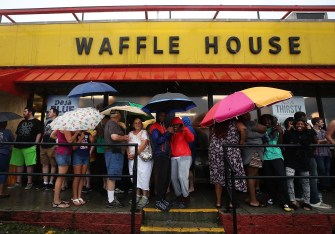 People wait in the rain to enter a Waffle House a day after Hurricane Florence hit the area, on September 15, 2018 in Wilmington, North Carolina. Photo credit: Mark Wilson / Getty Images

Getting serious about waffles

When a natural disaster approaches an area, Waffle House sends its upper management to the region and brings generators and extra supplies. They also bring in so-called “jump teams,” composed of Waffle House workers from several states over to cover the shifts at the affected Waffle Houses. The reasoning here is that local workers have either been evacuated or are busy taking care of their families. What’s more, jump teams come from several states over, not adjoining states — individuals from neighboring states are assumed to be busy taking care of the people evacuating the affected state.

The point is, Waffle House is prepared.

So, if a Waffle House is closed down, then it can be said with confidence that a natural disaster is severely affecting the local area. During Hurricane Matthew in 2016, one Waffle House in South Carolina only closed after its ceiling tiles began to fall. During 2018’s beastly Hurricane Michael, the diner franchise took the dramatic step of closing 30 restaurants, and for good reason: Michael would become the 10th costliest hurricane to strike the United States, causing approximately $25 billion in damages.

Former FEMA administrator Craig Fugate, the inventor of the Waffle House index, explains how it works:

“If a Waffle House store is open and offering a full menu, the index is green. If it is open but serving from a limited menu, it’s yellow. When the location has been forced to close, the index is red. Because Waffle House is well-prepared for disasters… it’s rare for the index to hit red.”

But the real aim of the Waffle House index isn’t to measure how hard the winds are blowing or how high the flood water is going to rise. It’s meant to measure how quickly a community can get back up on its feet. If the Waffle House index is green, local businesses are likely to reopen soon. If the index is yellow, it’s because the Waffle House doesn’t have access to the utilities necessary to cook certain dishes and has been forced to offer a limited menu. In this case, the community will almost certainly not have access to the same utilities, making recovery a challenge. And if the index is red, then local businesses are likely to stay closed for a while, and, by extension, residents and families will have a much harder time recovering.

“The sooner restaurants, grocery and corner stores, or banks can re-open,” said Fugate, “the sooner local economies will start generating revenue again — signaling a stronger recovery for that community. The success of the private sector in preparing for and weathering disasters is essential to a community’s ability to recover in the long run.”

So, if you find yourself in a dangerous situation, do what FEMA does and look to the Waffle House. Then, you’ll know whether you’re fine or in serious trouble.

Technology designed to listen for atomic bombs can also hear tornadoes.
Up Next
Life

Our clever human hands may soon be outdone.