Rhino poaching continues to be a big threat to the rhino population numbering a mere 30,000 animals globally. China and Vietnam are the biggest markets for rhino horns, which are primarily used for ornamental and medicinal purposes with no scientific basis.

The higher the prices of rhino horn, the more incentivized poachers are to take risks and continue the illegal trade. Rhino horn prices peaked in 2012 at $65,000 a kilogram, and even though environmental organizations don’t want to detail current prices out of fear of sparking more poaching, prices have remained high enough to motivate attacks like the one in a French zoo in March this year, where poachers killed and sawed off the horn of a white rhino. 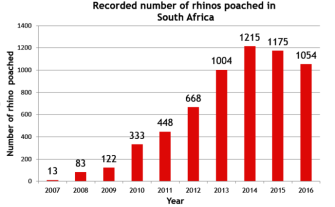 Credit: Save the Rhino

Conservationists’ efforts have been mainly targeted at finding ways to reduce the demand for rhino horn. Some African nations are also preemptively dehorning rhinos so that they become of no interest to poachers – a practice that is dangerous for the animal and needs to be repeated every couple of years.

Recently, some high-tech companies have been betting on a different approach. Pembient is one of several start-ups that wants to produce fake rhino horn, indiscernible from the real one. The idea is to flood the markets and drive prices down.

Contrary to what you may think, a rhino horn is not made of bone but of keratin – the material found in nails and hair. The horn is actually a compacted mass of hair that grows throughout the animal’s life.

Pembient’s initial approach was to make horn powder using proteins found in rhino horn and in microorganisms like yeast. This method didn’t deliver the desired quality, however, so now Pambient is working on cultivating horn from rhinoceros stem cells and selling it as raw material for ornamental uses.

Conservationist organizations are not fond of the approach, however. The position of the International Rhino Foundation and Save the Rhino International is that selling synthetic horn does not reduce the demand for rhino horn and, in fact, more than 90% of “rhino horns” in circulation are already fake. In addition, synthetic horn could give credibility to the notion that rhino horn has medicinal value and could normalise or remove the stigma from buying illegal real horn.

Matthew Markus, Pembient’s founder, has the opposite view. He not only believes that reducing the demand is “infeasible”, but that it is not really ethical either.

“These practices are based on thousands of years of cultural tradition — they’re a lot older than Thanksgiving. We can’t just tell them to stop.” – he says for Business Insider.

It is difficult to say what the effects of the fake rhino horn will be. As of now, Pembient is still in development of the substitute and cannot even name its price yet. Nevertheless, the company claims on its website that when the news of their product went viral in 2015, it resulted in a decline in rhino poaching “attributable to frightened speculators leaving the market ahead of an impending influx of questionable horn carvings.”

One thing is sure – a broad range of strategies are needed to address the illegal trade and save the rhinos and it will likely be best if all stakeholders worked together to achieve this goal.

China’s dominance of the rare earth metal industry is part of its overall geopolitical strategy.
The Past

A cartogram makes it easy to compare regional and national GDPs at a glance.
Strange Maps

How Europe will beat China on batteries

Scientific Theories Never Die, Not Unless Scientists Choose To Let Them

As wonderful as the evidence that supports or invalidates a theory is, it can never truly kill the ones that don’t work out.When it comes to science, we like to think […]