Before Sunday’s lineup of NFL games, over 100 players from several different teams took Colin Kaepernick’s lead from last year, and in silent protest took knees, locked arms, or stayed off the field entirely, before Sunday’s games. President Donald Trump responded with two tweets which together said, “If a player wants the privilege of making millions of dollars in the NFL, or other leagues, he or she should not be allowed to disrespect our Great American Flag (or Country) and should stand for the National Anthem. If not, YOU’RE FIRED. Find something else to do!”

The president has followed with a steady stream of tweets about the subject since then, including:

Roger Goodell of NFL just put out a statement trying to justify the total disrespect certain players show to our country.Tell them to stand!

Some conservatives believe that since NFL players enjoy fortune and celebrity, they aren’t in fact victims of prejudice. And that taking a knee or locking arms during the national anthem is a disrespect to the nation’s veterans who put their lives on the line, or to those who lost them, in defense of freedom and liberty.

On the other hand, liberals believe that it’s one’s right to protest according to the 1st amendment, that the actions were peaceful, and that African-Americans have legitimate concerns when it comes to police violence and systemic racism. Liberal-minded spectators saw this as an overall protest of racial injustice, while certain conservatives saw it as a direct protest against the president.

The Twitterverse exploded in debate soon after and the fury picked up on Monday, with many conservatives rallying around the hashtag #StandForOurAnthem and liberals circling around #TakeaKnee. In many conservative channels, Pittsburgh Steelers offensive tackle and former Army Ranger Alejandro Villanueva, became a hero. He was the lone Steeler who stood for the anthem in Sunday’s game. 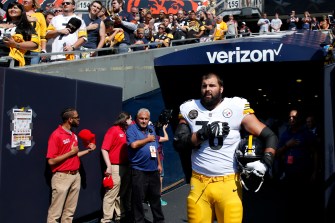 The country’s divide was once again made glaringly apparent as this new front in the culture wars flared up. Since then, a number of celebrities, pundits, and media personalities have weighed in. Fox News commentator Bryan Dean Wright wrote that such protests inflame racial divides, rather than merely calling attention to inequity. He said he’d rather players, “lead a constructive conversation on race.”

To the contrary, a piece in Foreign Policy magazine by veteran military journalist Thomas E. Ricks outlines the US Army tradition of “taking a knee” as something to admire, and be emulated. It’s taking a breather—a chance to step back for a moment, gather one’s thoughts and reconsider the situation. “I kind of like the idea of the nation taking a knee and considering our racial situation, and how we can all do better,” he wrote. “You know we can.” 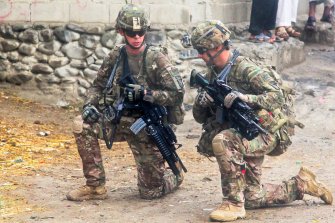 Of course, the beautiful thing about the digital era is we can easily see what veterans themselves think. Legions took to the character-restricted social media site to voice their opinion.

Some felt certain parties used them to serve their own side:

I’m one of countless military veterans taking a knee. Do not exploit our service to silence black Americans and endorse racism.#TakeaKnee

Im a veteran and i served so we all have rights and are free i will be taking a knee from here on out we must stand together. #TakeAKnee

A program in Brazil both helped and harmed. What can we learn from it?
Strange Maps

Mindfulness may cause the human brain to transcend racial biases

The present-moment awareness that stems from mindfulness practices may be the cost-effective tool that our society needs.
High Culture

Add these great titles to your wish list or secure copies for yourself.
The Present

New research spotlights how low-income Black households face greater financial distress and vulnerability as a result of the pandemic economic crisis.
Up Next
Neuropsych

The discovery of a neuron in the brain that acts as the “master controller” of habits could someday change the way we treat addiction and compulsive behaviors.