A prerequisite for fully transitioning away from petroleum products — those carbon-spewing substances whose supplies are dwindling anyway — is a ubiquitous public infrastructure for charging electric vehicles (EVs) that’s as omnipresent as gas stations are now.

While home-based charging is becoming more readily available, keeping an EV going over large distances still requires public charging. There are an increasing number of merchants who offer EV chargers alongside their gas and diesel pumps, but now the very first all-electric recharging station in the U.S. has opened its doors in Tacoma Park, Maryland.

The gas station, RS Automotive, has been owned by Depeswar Doley since 1997. He’s hoping it’s just the change he’s looking for, having been increasingly unsure about depending on oil companies with their draconian contracts and onerous mandatory sales quotas.

A local public works manager suggested the idea to Doley, who told his 17-year-old daughter he was thinking about talking to the Electric Vehicle Institute (EVI). He recalls to CNBC that “She said, ‘Dad, that’s a real good suggestion.'”

RS Automotive has four high-power power dispensers running on a 200kW system. Reportedly, four vehicles can reach an 80 percent charge in 20–30 minutes. There’s a comfortable space in which drivers can idle as they wait for their vehicles to charge, as well as an automated convenience store.

Doley’s making his move with his eye on the future, not expecting it to result in an immediate windfall. “You notice there are not too many electric vehicles on the road. So it’s not something that I expect to become rich overnight or something like that. But it’s a good cause and good for the environment.”

His risk is somewhat mitigated by a local electric taxi service in need of chargers. In addition, there are already 20,700 registered electric vehicles in Maryland, if not in Takoma Park, and the Maryland Energy Administration awarded Doley a grant of $786,000 for the conversion from petroleum.

EVI’s Matthew Wade says there’s undoubtedly going to be demand for the Doley’s chargers. Without them, Takoma Park has just two, one located in a community center and the other on the side of a street. “They were fully utilized throughout the day; people were lining up. The city was happy they were being used, but then they said, ‘Wait, no one can get in this parking lot, because these taxis are using these chargers.'” 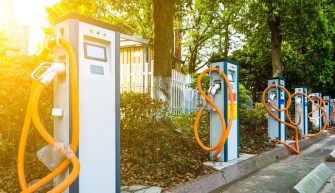 How many EVs are there?

There are over a million EVs now in service in the U.S. These vehicles still represent just 2 percent of America’s wheels, but that number is rapidly growing, with 208,000 new registrations in 2018 alone. It’s estimated that there will be 350,000 new U.S. registrations in 2020. Counting plug-in hybrids, there are some 40 varieties of vehicles to choose from.

Consumer Reports Advocacy notes that if you remove well-publicized Tesla from the equation, the growth rate in sales is just 11 percent, but the EV industry has really just hit the ignition button. All new vehicle sales flattened out in 2018, so an 11 percent growth rate for EV sales is noteworthy.

Worldwide, the market acceptance of EVs is also growing, with an estimated 2 or 3 million EVs purchased and operating. Nanalzye asserts that satisfying the charging needs for these vehicles would require some 2 million EV public charging stations worldwide. According to the International Energy Agency, the global number of EVs will rise to 300–400 million by 2040.

Tesla has more than 1,600 charging stations around the U.S., adding up to almost 15,00 chargers. (Originally free, Tesla now charges for a charge.) Other automakers are also dabbling in EV charging stations, including Hyundai, Kia, Daimler Mercedes Benz, and Renault.

Perhaps most promising is that some petroleum corporations are themselves moving into the space, such as Shell and BP. Count in some power utilities, too, including California’s Pacific Gas and Electric and Europe’s RWE.

Venture capitalists are seeing the future much as Doley is, funding startups such as ChargePoint, which plans to get as many as 2.5 million chargers by 2025 in place. EVgo claims to have the largest current public EV charging infrastructure in the U.S., with 1,200 fast chargers at 700 EV charging stations. Worldwide, the leader may be EVBox, who says they have 60,000 charging points internationally.

Doley may be making a very smart move here.

Tags
carsElectricityenergyfuturesustainabilitytransportationurban planningwin: first ev station
In this article
carsElectricityenergyfuturesustainabilitytransportationurban planningwin: first ev station
Related
Starts With A Bang
This shockingly simple battery could store energy forever
Capacitors, acid batteries, and other methods of storing electric charges all lose energy over time. These gravity-fed batteries won’t.
The Future
7 major science and tech breakthroughs of 2022
It was a particularly good year for biotech and medical technology. There were also notable advances in energy.
The Future
Paper-thin solar cell can turn any surface into a power source
Some solar cells are so lightweight they can sit on a soap bubble.
The Future
New battery is cheaper than lithium-ion with four times the capacity
Lithium-ion batteries pose challenges for our transition toward renewable energy. Sodium-sulfur batteries might be a solution.
The Future
How do floating wind turbines work?
Once water gets more than about 200 feet deep, building on the sea floor is out of the question.
Up Next
Hard Science
We may have to abandon concrete to fight climate change, architectural experts say
The building material seems so ubiquitous — what can we use in its place?