Methane released by cows as a result of their digestive processes is a problem. It accounts for 25 percent of all methane emissions, and methane happens to be one of the worst greenhouse gases. Pound for pound, the comparative impact of methane on climate change is over 20 times greater than carbon dioxide over a 100-year period.

If the problem (and cows’ role in it) wasn’t that serious, the Obama administration wouldn’t have proposed a plan to cut the methane emissions from the dairy industry by 25 percent by 2020. But while the American government might not have thought of this funny a solution for such a serious problem, Argentina’s National Institute of Agricultural Technology (INTA) has come up with quite an innovative (and amusing) one.

Meet the cow-fart-backpack that wants to fight climate change. 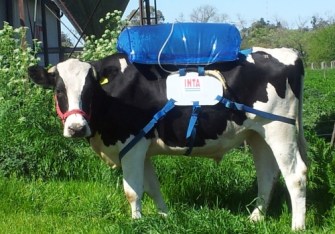 The reasoning behind the device is the following — what if we could found a way to capture the nearly 300 litres (or 80 gallons) methane a day, an average cow emits, and turn that gas into useful biofuel? Developing the backpack, the institute’s goal was to show that such a process is possible. And so it did.

The backpack manages to capture and collect the gases emitted through the cow’s mouth or intestinal tract via a tube inserted through the cow’s skin (which the researchers claim is painless). The gas is then condensed and ready to use to provide power for the farm on which the cow lives, for example, for activities such as cooking, lighting a home or even driving a car.

According to Ricardo Bualo, one of the technicians working on the project, the 300 liters of methane per day a cow emits, can be used to operate a fridge capacity of 100 liters at a temperature of between two and six degrees for a full day.

As of now, there are no plans to produce and use the backpack on a large scale, but the device surely shows an interesting way to approach a problem. Ingenious, funny or disturbing? You decide.

With opposition to Obamacare waning, Republicans need a new issue to propel them toward November and beyond.