A large portion of the world’s population lives in conditions that are hard to fathom for people in developed countries. Many of those living in extreme poverty would gladly move to the United States, the European Union or Australia if given a chance. In light of this, how should rich countries design and enforce their immigration policies?

The figures for world poverty are staggering. According to the latest estimates from the World Bank, some 2.1 billion people live on less than $3.10 a day, adjusting for purchasing power. This means that, in their respective countries, they have only what $3.10 would buy them in the US.

It is hard to imagine living, even in the least expensive locales in the US, on $3.10 a day. What could you eat? Beans and rice bought wholesale maybe. You might get to buy some clothing once a year. You certainly wouldn’t be able to afford rent – you’d have to squat somewhere. Compare that with the US poverty line of $24,000 a year for a family of four. That ends up being more than $16 per day per person. Poverty lines in the EU set a relatively high bar too; in Germany, the figure comes out to about €22,500 a year (c$25,000) for a family of four.

Life is much, much better in the US or Germany than in many parts of the world, even for these countries’ poorest inhabitants. And it’s not just a matter of income – developed countries offer a much better life in terms of free schooling, infrastructure and the like, compared with Ethiopia or Bangladesh.

Now imagine you are one of those 2.1 billion people. Let’s say you live in Ethiopia, on less than $3.10 a day. Would you want to move to the US or the EU if given a chance? Of course, it would be irrational not to. You’d achieve a much better standard of living, even if you worked at a minimum-wage job. Your children would gain access to vastly better schooling and would not have to work to support the family. You would not have to worry constantly about having enough food to eat. 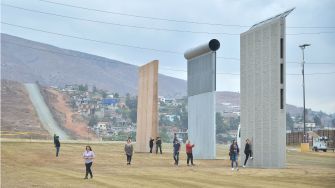 But migrating to the rich world is not so simple for you. For instance, in order to move to the US permanently through legal means, you need to get a work visa or a permanent residence visa. And, for that, you need to have family in the US (though, depending on the relation, this option can take more than a decade), or be working in a high-skill occupation with an offer of employment, or just luck out via the Diversity Visa Lottery system. There are other ways, but they require applicants to have been in extremely specific circumstances – for instance, there is a permanent visa for translators who worked for the US army during the wars in Iraq and Afghanistan.

Suffice to say, none of these options are widely available to people living in poverty across the developing world. Still, you could try to move to the US without a work or permanent residence visa – that would mean staying in the US illegally once you enter.

But this is extremely hard to do if you’re from a place such as Ethiopia. In order to board a plane to the US, you’d need a US tourist visa, at the least. And, to get such a visa, you’d need to prove that you don’t intend to abandon your residence in Ethiopia. How would you prove this? You’d need to show that you have financial and social ties to the country strong enough to make it irrational for you to abandon your residence there. But if you’re living on less than $3.10 a day, you are bound to have a hard time proving this. For the poorest people, it’s extremely hard to get tourist visas to the US – even putting aside the high application fees. The EU nations, Australia and other rich countries similarly require tourist visas for individuals from the developing world.

The reason why many of the world’s poor do not migrate to a developed country, then, is that they’re stopped by a system of visa policies and airport and seaport security measures – invisible walls, so to speak.

Few people seem to be aware of or bothered by this. There are, of course, scholars and activists who believe in fully open borders. The philosopher Michael Huemer at the University of Colorado Boulder has been an influential proponent of the view. Libertarian-minded economists such as Bryan Caplan at George Mason University in Virginia also advocate for open-border policies. But such voices are in the minority.

But if the system of visa policies and airport security is justified, why are border fences not justified? Mere geographic proximity is not morally relevant. The fact that an individual likely to immigrate via the southern border is geographically closer to the US than the Ethiopian should not have moral significance. Thus, if the reason for not having a southern border fence is that the US should allow poor people to have a chance at a better life, then there’s no moral reason why this opportunity should be given only to the poor who happen to live nearby.

It’s unfair to the Ethiopian, or Bangladeshi, that a porous land border allows Meso or Latin Americans without the required documentation to enter and stay in the US. The Ethiopian or the Bangladeshi, by contrast, faces the more imposing and stringent hurdle of air travel and airport security.

Coercion requires justification. Airport security and visa policies effectively coerce the Ethiopian to stay out of the rich world’s territories. But if other individuals who do not have the documents required by law can enter these countries via lax land-border security, the justification becomes weak. The Ethiopian might ask: ‘Why are you stopping me if you’re not stopping them?’ There is no morally justifiable answer.

If, as most Americans believe, a border fence is not justified, then neither is the current system of visa policies that stops many of the world’s poorest people from moving to richer countries.

With respect to border policy, the status quo is morally incoherent. Either the rich countries of the world should embrace fully open borders (perhaps with exceptions for certain kinds of criminals), or they should enforce land borders just like the air and sea routes.

Tags
border wallEthicsethiopiaEuropeimmigrationjustificationmigrant visamoralno borderspolicyunited states
In this article
border wallEthicsethiopiaEuropeimmigrationjustificationmigrant visamoralno borderspolicyunited states
Related
The Present
What’s effective altruism? A philosopher explains
Some effective altruists “earn to give” — they make as much money as they can and then donate most of it to charities.
The Learning Curve
5 Stoic quotes to help you through difficult times
“We suffer more often in the imagination than in reality.”
Thinking
Finding your essential self: the ancient philosophy of Zhuangzi explained
Adopting a healthy scepticism towards inherited ideas means “emptying the container of the Self.”
Thinking
Bonhoeffer’s “theory of stupidity”: We have more to fear from stupid people than evil ones
Evil is easy to identify and fight against; not so with stupidity.
Health
Chantix, Trulicity, Xeljanz, and most drugs advertised on TV are of “low therapeutic value”
Close to 70% of drugs advertised on TV offer little to no benefit over other cheaper drugs.
Up Next
Technology & Innovation
It’s Fructan, Not Gluten, That’s Causing Stomach Problems, Says New Research
The gluten-free craze may be misguided since there’s another culprit behind bloating, says new research.