South Koreans are optimistic about the Olympics. Luckily this year, North and South Korea are enjoying another thawing period in their relationship, and will even be cooperating in certain respects during the Games. But since this is an event for the world stage, it isn’t just North Korea that Seoul has to worry about.

As a result, the republic is interweaving cutting-edge technology into its security systems to keep spectators, athletes, and VIPs safe this Olympic season. The measures were recently announced by the PyeongChang Olympics anti-Terrorism and Safety Headquarters.

This includes cooperative efforts among South Korea’s National Counter-Terrorism Center (NCTC), the National Intelligence Service (NIS), the Presidential Security Service, the police, and the armed forces, all equating to about 60,000 security professionals in all. They’ve set up 18 safety control offices scattered around accommodations, event venues, and other locations, and a headquarters that began around-the-clock operations on Feb. 1.

In addition, a computer emergency response team (CERT) has been put in place to head off any would-be hackers. Armed with 700 computer experts from the public and private sectors, their job is to monitor for unusual signs, such as DDoS attacks and malware circulation, every minute of the day until the Games end. 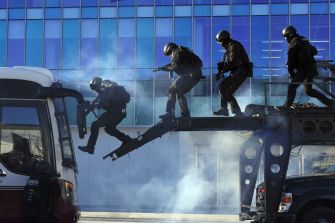 Offline, the security service, in particular, will be monitoring VIPs, such as visiting presidents, prime ministers, and kings and queens, arriving from a couple of dozen of countries. Dignitaries include US Vice President Mike Pence, Japanese Prime Minister Shinzo Abe, the king and queen of Sweden, Denmark’s Crown Prince Frederik, Monaco‘s Prince Albert II, U.N. Secretary-General Antonio Guterres, and Kim Jong-un’s influential sister Kim Yo-jong, the announcement of which made waves this week. Details are unclear for Yo-jong, but the others have each been assigned a car and their whereabouts will be carefully monitored from a special situation room.

Closed circuit TV (CCTV) is ubiquitous in South Korea. Officials are taking advantage of that. 1,070 surveillance cameras will be used to watch stadiums, train stations, airports, and more. In addition, electromagnetic field detectors and other such devices will be employed to monitor for and shut down hacking, wiretapping, and spy cameras. There are also defenses in place at the airports, various stadiums, and lodgings to protect against chemical, biological, or radiation-based attacks.

On the ground, special X-ray vehicles will scan incoming cars, trucks, and buses for hidden people, guns, and dangerous objects. Officials have declared a no-fly zone for unauthorized aircraft inside the Olympic airspace. One thing you might see in the sky, however, is a low-flying aircraft. It’s equipped with intelligent CCTV and facial recognition technology. It’ll monitor the games from 150-200m (492-656 ft.) up, 24-7. Should a suspicious unmanned aerial vehicle (UAV) be spotted, a special drone detecting radar developed at the Korea Advanced Institute of Science & Technology (KAIST) will keep tabs on it. 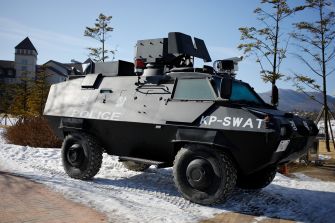 Imagine a terrorist organization or a rogue state loading a drone with a bomb and sending it into an Olympic stadium. One possible reaction: send out a SWAT team to shoot it down, which was found to be a successful course of action in a recent, pre-Olympics drill. Another option is deploying a marine in a helicopter, toting a drone radio signal-jamming gun. This causes it to immediately drop out of the sky. But if it’s carrying, say, a chemical weapon it could cause damage where it lands.

Maybe the best way to catch a drone is with a drone. And security officials are preparing to do just that. They’ve equipping certain UAV with nets to intercept weaponized drones coming at a VIPs car, or a bus full of athletes. These “drone-catching drones” are more robust and rugged than your civilian variety. They’ll be flown by a crack security team and carry high-definition and thermal imaging cameras.

“The performance of the drones has been proven through test runs,” an official with the security service told The Korea Times, under the condition of anonymity. But how quickly could an operator take out a dangerous drone? Two years ago, Japanese police released a video of operators catching a quadcopter with a drone-catching drone. The net scooped it up easily and stopped the propellers from rotating.

Japanese police using a drone to catch a drone. via GIPHY

The Korean conflict itself is moving into drone territory. North Korea has sent spy drones into the South for reconnaissance, and last March, South Korea announced that it believes Pyeongyang could have as many as 1,000 weaponized drones to use in asymmetrical attacks, possibly loaded with explosives, or chemical or biological weapons.

South Korea isn’t taking this sitting down. Seoul revealed in December it too is developing a weaponized drone unit. They believe they can use drones to investigate North Korea’s nuclear and missile sites, and even use them as offensive weapons.

Of course, there’s no specific threat to the Olympics in PyeongChang at this time. And warmer relations with North Korea have softened tensions. Still, remembrances of the past, such as North Korean attacks on South Korean civilians and officials leading up to the 1988 Summer Games and the “Munich Massacre”, whereby terrorists killed 11 Israeli athletes, are still fresh in many minds.

To explore other angles of the 2018 PyeongChang Winter Olympics, click here:

For the first time in Gerber’s history, its “spokesbaby” is a boy with Down syndrome

Each year since 2010, thousands of parents submit photos of their children for consideration in Gerber’s “Spokesbaby” contest. This year the winner made history.