Students of color perform better in school when they have at least one teacher of the same race, suggests a growing body of research. A recent study explored this phenomenon by analyzing the racial disparities among American schoolchildren and their teachers in various parts of the country, and sought to understand how young adults become teachers in the first place.

The researchers—Constance A. Lindsay, Erica Blom and Alexandra Tilsley of the Urban Institute—used data from the American Community Survey to illustrate the racial disparities among teachers and students. 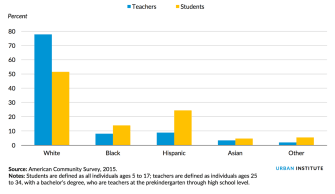 Why should we care about these disparities? The authors wrote that while the jury’s still out on the exact causal mechanisms at play, a growing body of research suggests that same-race teachers can have positive effects on students of color by having higher expectations, serving as role models, and having a better cultural understanding of the students. These effects seem especially significant for economically disadvantaged black male students, as David Figlio writes in an article for the Brookings Institute:

For instance, they find that a disadvantaged black male’s exposure to at least one black teacher in elementary school reduces his probability of dropping out of high school by nearly 40 percent. This estimated effect is not just statistically significant, but also highly educationally relevant.

Research also suggests that black students are less likely to be suspended and more likely to be admitted to gifted programs when they have black teachers.

Given the impacts same-race teachers can have on students of color, the authors of the recent study sought to understand how young adults become teachers. The biggest prerequisite for becoming a teacher in the U.S. is obtaining a bachelor’s degree. And here, too, lie significant racial disparities.

White and Asian young adults obtain high school and university degrees at significantly higher rates than their black and Hispanic counterparts, even though the portion of young adults who  earn bachelor’s degrees and then become teachers is basically the same across all races. The researchers argue that increasing the amount of black and Hispanic young adults who earn bachelor’s degrees would result in more equal representation in the classroom.

By expanding the pool of college graduates, we expand the pool of potential teachers. The pipeline to a teaching career starts well before college graduation—it starts with getting more black and Hispanic young people through high school and college.

They propose that doing so would not only benefit students of color, but society at large:

In addition to the strong economic and social benefits accruing to the students themselves when they graduate from high school, Levin and Rouse argue that the net benefit to taxpayers associated with each new high school graduate is well over $100,000.

Screens were around in previous generations, but now they truly define childhood.
Up Next
Design Thinking

Mastering the 5 Steps of Design Thinking with Online Learning Videos

Design thinking is a process that emphasizes creating human-centric solutions to common business problems. While this general definition explains the primary goal of design thinking, it doesn’t really cover the […]