An hour away from Area 51 in the Nevada desert, a beacon shines inexhaustibly day after day. And while its proximity to the famous classified zone makes some travelers believe they have seen something alien, the artifact is far from being extraterrestrial.

The beacon is part of a revolutionary solar generating and storage technology that may finally make solar power an undeniable competitor to coal and nuclear. With the first utility-scale facility already operating in Crescent Dunes, Nevada (and several more under development around the world), we are hopefully seeing the beginning of a new era in energy production.

The technology is called concentrated solar power (CSP) and uses a system of mirrors to concentrate solar energy and turn it into thermal by heating up a medium. The Crescent Dunes Power Plant, developed by the company SolarReserve, uses salts to capture and store the energy from the sun. The result is solar power available 24 hours a day, that can meet utility demands just like conventional fossil fuels, except without any emissions or hazardous waste. 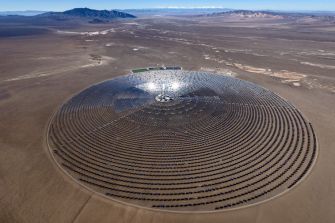 While a CSP facility may look like a photovoltaic farm, the only similarity is that both technologies use sunlight as fuel.

At Crescent Dunes the sun’s energy is concentrates via 10,347 tracking mirrors called heliostats to a precise point on top of a central receiver tower. Highly accurate GPS measurements and algorithms enable the movement of the mirrors throughout the day and the positioning of the beam on the receiver.

Cold salt, stored in a tank next to the tower, is pumped up to collect the generated heat which can reach up to a 1000 degrees Fahrenheit. The molten salt is then pumped down into a hot salt tank which acts like a battery, preserving the heat for up to 16 hours. Unlike batteries, however, molten salt lasts for 40 years or more, without any degradation or need for replacement and it also costs less.

The molten salt in the tank can then be used to generate steam to drive a turbine and create electricity. This part of the cycle is identical to the process used in traditional coal or nuclear power plants, except it is 100 percent renewable and 100 percent clean. 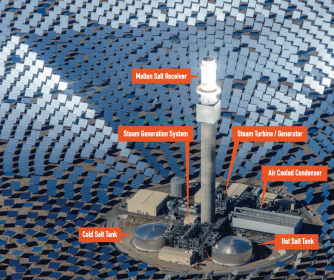 The Crescent Dunes plant produces more than 500,000 megawatt-hours of electricity per year, twice the generation of an equivalent sized photovoltaics (PV) plant. Storage allows the facility to produce more than twice as much net annual output (kilowatt hours) than an equivalent sized photovoltaic (PV) solar project. Its 1.1 gigawatt-hour storage capability alone is about equal to all the world’s utility scale batteries combined.

100% of the generated energy is purchased by NV Energy under a 25-year contract, and used for distribution to its customers during peak demand periods. The solar plant can power 75,000 homes, day and night. 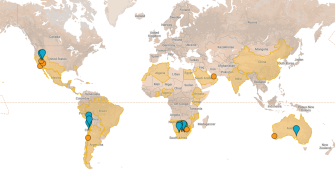 Now, falling prices of CSP are making prospects for the technology look promising. The new plants SolarReserve is building in Australia and Chile are expected to sell power at 6 and 5 cents per kilowatt-hour respectively – prices comparable to those from photovoltaics. Construction costs have also been cut in half, from almost $1 billion for the Crescent Dunes plant. 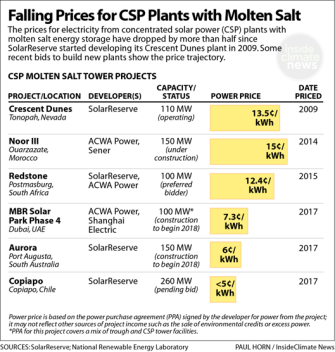 Mark Mehos, program manager for CSP research at the National Renewable Energy Laboratory in Colorado said for Inside Climate News:

“We really need to see installations, on the ground, that match those bids and that operate reliably.”

The construction and performance of the new CSP plants currently in the pipeline will be the deciding factor for the future of the technology. But Mehos is optimistic, “It seems inescapable, doesn’t it?”

Tags
climate changeelectric billElectricityenergyfossil fuelsglobal warmingpower plantsolarsolar energysolar powersun power
In this article
climate changeelectric billElectricityenergyfossil fuelsglobal warmingpower plantsolarsolar energysolar powersun power
Related
The Present
How heat pumps of the 1800s are becoming the technology of the future
Innovative thinking has done away with problems that long dogged the electric devices — and both scientists and environmentalists are excited about the possibilities.
Starts With A Bang
This shockingly simple battery could store energy forever
Capacitors, acid batteries, and other methods of storing electric charges all lose energy over time. These gravity-fed batteries won’t.
The Future
7 major science and tech breakthroughs of 2022
It was a particularly good year for biotech and medical technology. There were also notable advances in energy.
The Future
Paper-thin solar cell can turn any surface into a power source
Some solar cells are so lightweight they can sit on a soap bubble.
The Future
New battery is cheaper than lithium-ion with four times the capacity
Lithium-ion batteries pose challenges for our transition toward renewable energy. Sodium-sulfur batteries might be a solution.
Up Next
Hard Science
Geneticists reverse engineer DNA of the first black Icelander, who left no remains
Scientists can now virtually reconstruction certain long-dead individuals, without the need for DNA samples from physical remains.