As we look to power tomorrow’s devices sustainably and economically, there’s a great deal of research going into the development of better, cleaner battery technology. Showing particular promise are fuel-cell and metal-air battery technologies. Though both continue to operate using the anode/cathode/electrolyte paradigm of current batteries, the race is on to find more sustainable materials that can replace those in current use. A new study published in the American Chemical Society’s open-source journal ACS Omega proposes that one solution may be Popeye’s favorite superfood: spinach. 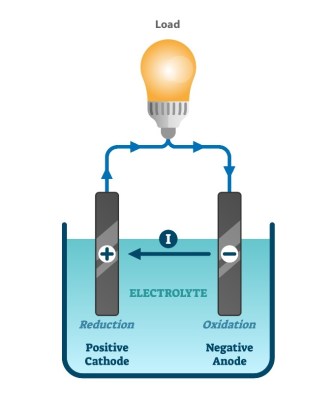 Flow of energy when battery is in use, dischargingCredit: VectorMine/Shutterstock/Big Think

Electrons travel within a battery from one electrode, called the anode, through the battery’s electrolyte — either a powder or liquid barrier — to another electrode, called the cathode. The anode releases these electrons through a chemical process called oxidation, while the cathode accepts them through another, an oxygen reduction reaction. Together, this exchange is called a “redox.”

The electrons’ return trip back to the anode, however, requires a “load” provided by an external device, which is fine, since that device — a flashlight, a phone, or a car, for example — operates on the energy produced by the battery’s electrons passing through.

The electrons travel out from the cathode’s positive terminal to the device then return to the battery’s negative anode terminal. In this way the energy travels round and round the battery-device circuit. (When charging a battery, electrons go in the opposite direction connected to a charger.)

The new study is concerned with the catalyst that produces the cathode’s oxygen reduction reaction. 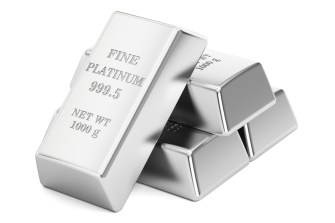 Fuel cell batteries and metal-air batteries use the surrounding air outside the battery as their cathode. It’s clean, free, plentiful, and it works, as long as there’s a catalyst that can adequately prompt the requisite oxygen reduction reaction.

The most commonly used catalysts for such batteries have been based on platinum. There are problems with these, though. Of course, platinum is expensive. Also, as the study notes, “the lack of long-term stability and the vulnerability to surface poisoning by various chemicals such as methanol and carbon monoxide, call for the development of non-Pt group metal (NPGM) catalysts.”

Researchers have therefore been exploring non-toxic, carbon-based catalyst alternatives since they may be more stable and exhibit resistance to surface poisoning. And because carbon is everywhere, they’d be inexpensive to produce. However, some of the materials being investigated don’t do the job as well as platinum-based catalysts. The chemical reaction they produce is slow, posing a speed bottleneck to the flow of electrons. 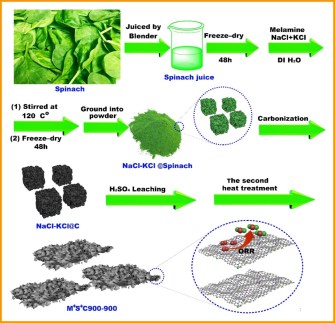 “The method we tested can produce highly active, carbon-based catalysts from spinach, which is a renewable biomass. In fact, we believe it outperforms commercial platinum catalysts in both activity and stability. The catalysts are potentially applicable in hydrogen fuel cells and metal-air batteries.”

While other catalyst research has involved plants such as rice and cattails, Zou believes spinach has a few things that make it a superior candidate as a catalyst material. For one thing, it’s rich in iron and nitrogen, both essential catalyst ingredients. In addition, it’s easy and inexpensive to grow, and it’s abundant.

Zou and his students developed spinach-based carbon nanosheets a thousand times thinner than a human hair. The process is complex, a combination of basic and advanced techniques.

To begin, the researchers washed, juiced, and freeze-dried the vegetable before grinding it by hand into a fine powder using a mortar and pestle. Next, the spinach powder was dissolved and mixed with melamine, sodium chloride, and potassium chloride in water and cooked together at 120°C. This mixture was then rapid-cooled in liquid nitrogen and freeze-dried. Then it was pyrolized twice.

It may well have been worth the effort. Measurements of the resulting nanosheet indicated that it can out-perform platinum as a catalyst in both speed and stability. Of course, that’s on top of being made from such an unassuming, inexpensive, and widely available plant.

“This work,” says Zou, “suggests that sustainable catalysts can be made for an oxygen reduction reaction from natural resources.” The next step for Zou and his students is to try out their spinach catalyst in prototype fuel cells to assess its performance in action. They’re also looking into the use of other plant materials for catalysts.

Tags
batteriesElectricityenergyinventionmaterialssustainabilitytechnology
In this article
batteriesElectricityenergyinventionmaterialssustainabilitytechnology
Related
The Present
How heat pumps of the 1800s are becoming the technology of the future
Innovative thinking has done away with problems that long dogged the electric devices — and both scientists and environmentalists are excited about the possibilities.
Starts With A Bang
This shockingly simple battery could store energy forever
Capacitors, acid batteries, and other methods of storing electric charges all lose energy over time. These gravity-fed batteries won’t.
The Future
7 major science and tech breakthroughs of 2022
It was a particularly good year for biotech and medical technology. There were also notable advances in energy.
The Future
Paper-thin solar cell can turn any surface into a power source
Some solar cells are so lightweight they can sit on a soap bubble.
The Future
New battery is cheaper than lithium-ion with four times the capacity
Lithium-ion batteries pose challenges for our transition toward renewable energy. Sodium-sulfur batteries might be a solution.
Up Next
Starts With A Bang
Why Are Scientists So Cruel To New Ideas?
Demanding appropriate levels of skepticism and scrutiny isn’t cruelty, but rather demonstrates scientific integrity and intellectual honesty.Every few months, a novel headline will fly across the world, claiming to revolutionize […]