It looks like the long arm of the law stretches as far as space. Astronaut Anne McClain, 40, has became the first person to ever be investigated for a crime that’s alleged to have taken place in space.

McClain is a NASA astronaut, the allegations against were put forth by her ex-wife Summer Worden, who accused her of identity theft because she accessed her bank account on a NASA computer. It’s claimed that the crime, according to Worden, was committed while McClain was on a six-month mission on the International Space Station.

While this crime might seem inane compared to something like murder, it’s opened up a lot of intrigue into the realm of space law. As more countries and private companies start sending people to space — the inevitability of future space crimes (people are people, even in space) is almost guaranteed. 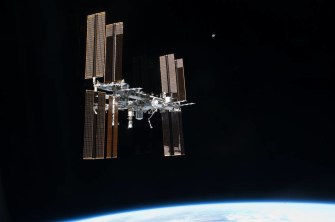 Worden originally filed a complaint with the Federal Trade Commission. According to The New York Times, investigators are already looking into the situation. The accuser believes that McClain accessed Worden’s bank account while using NASA technology, McClain acknowledges that she accessed the account, but denies any unlawful intent. She claims that she was just managing the couple’s finances.

Meanwhile, NASA has spoken publicly to praise McClain’s professional career, but declined to comment on the allegations. According to a statement sent to Space.com, NASA representatives stated:

“Lt. Col. Anne McClain has an accomplished military career, flew combat missions in Iraq, and is one of NASA’s top astronauts. She did a great job on her most recent NASA mission aboard the International Space Station. Like with all NASA employees, NASA does not comment on personal or personnel matters.”

While they may not be commenting on the matter publicly, the issue is being held by American authorities. Since the legal dispute is between two American citizens, this case ostensibly falls under U.S. jurisdiction. The situation would have been more complicated had it occurred with an international astronaut in space.

This said, though this case may be cut and dry, in a sense, future space crimes might be a little murkier.

Currently, there is no detailed framework for international space law nor is there anyway to handle criminal disputes that arise on commercial space vessels. It gets even less defined when it comes to disputes between individuals from separate countries.

It stipulates that in the area of criminal jurisdiction, each country on the ISS or involved with it has criminal jurisdiction over their own people in space, as long as there isn’t a conflict between someone from another country. Pertaining to our first space crime, both McClain and Worden are US citizens, which clears up any potential legal issues that could stem from this being in space.

“Canada, the European Partner States, Japan, Russia, and the United States may exercise criminal jurisdiction over personnel in or on any flight element who are their respective nationals.”

In other areas of space, the law isn’t as clear. Currently space is governed by five major international treaties, colloquially known as: the Outer Space Treaty, Moon Agreement, Registration Convention, Rescue Agreement, and the Liability Convention.

The protocol for an incident on a commercial space station between two differing nationals isn’t really covered by any of these treaties. The Outer Space Treaty, an agreement that was made over 50 years ago between 109 governments, doesn’t have anything to say regarding this topic.

Except that jurisdiction and control over any commercial companies or private entities emanating from the government of origin is that government’s responsibility.

The United States may be able to use a special provision of US Code known as “special maritime and territorial jurisdiction of the United States,” which covers how to handle criminal disputes outside of any country’s jurisdiction. However, this law does not cover all types of crimes.

More comprehensive international codes and legislation will need to be drafted and thought up as space becomes increasingly more populated.

Tags
crimelawspace
In this article
crimelawspace
Related
Life
“I went to space and discovered an enormous lie”
What astronaut Ron Garan saw in space changed his life forever – here’s what it taught him.
▸
8 min
—
with
Ron Garan
Videos
The true story behind Carl Sagan’s cult classic, Contact
Do aliens dream about meeting us, too?
▸
with
Jill Tarter
Videos
NASA astronaut explains humanity’s trajectory to Mars
The first human that isn’t an Earthling could be in our lifetime.
▸
5 min
—
with
Robert Curbeam
How Earth’s 23.4° tilt makes life beautiful
Rituals come as much from religion as they do from the way Earth spins around the Sun.
▸
4 min
—
with
Sasha Sagan
Videos
Michio Kaku: “We need a second planet”
Humans won’t survive if we stay on Earth. Michio Kaku explains.
▸
7 min
—
with
Michio Kaku
Up Next
Strange Maps
A murder map of Denmark
Lovers deadlier than gangsters, first comprehensive Danish homicide study since 1970s shows