It’s impossible to be a perfect parent, however hard you try. One thing that has a lot of parents feeling continually guilty is the amount of time their kids spend staring at screens. It’s mind-boggling. Or is it? A report from the UK’s Royal College of Paediatrics and Child Health (RCPCH) concludes that there’s little hard evidentiary basis for concern about those screens themselves, at least for 11-24 year-olds. (Its effects on younger children are not considered in the study.) The researchers examined “940 abstracts, with 12 systematic reviews,” noting that most of those look only at the effects of watching lots of TV.

What’s on kids’ screens, however, is another story. Ultimately, the purpose of the report is to offer guidance to parents while calling for more granular research into the documented effects that extended screen times can seem to have on young people. 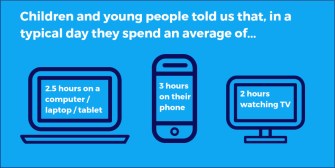 How many hours are we talking about?

Children and young adults find themselves in front of screens all day. Between computers at school, computers they use for homework, phones, and TV, it’s pretty relentless. According to the study, the average person in the group they studied — 109 UK respondents from ages 11 to 24 — spends 7.5 hours a day basking in the cold glow of a device.

Earlier research examined for the report finds correlations between more than two hours of screen time and poor diet, and a negative effect on mental health, with an increased likelihood of depression. There’s also some hint of a connection to reduced educational outcomes and sleep and fitness, though the authors describe this as “weak.” The study’s respondents had their own views of the cost.

So is there a connection?

The report says that presented with some kind of connection, there are four possible interpretations. Quoting the report:

With the immediate discarding of Item 1, we step away from there being some physical damage being done by screens themselves.

With #2 describing the unhealthy ways in which screen time can distract from important sensations such as a need to eat, it should be mentioned that this also has a positive upside: Screen viewing can also distract a person from not being able to eat for lack of food, and it can provide sometimes-necessary emotional escape from difficult circumstances.

The third possibility is the most frightening to parents: The intrusion of bad actors in their child’s life. Cyberbullies can devastate a young spirit, while social sites publish status rankings, host influencers who can damage a young person’s self-image, and others deliver content of which parents disapprove.

The damage inflicted in the fourth scenario is simple: If one spends all of one’s time onscreen, there’s no time left for other activities. This is not unique to screen time, though. Any overwhelming area of interest can eat up too much time for doing other things.

What the report recommends

As we wait for further, more granular, research and clearer answers on this issue, the RCPCH advises beginning with a calm family discussion in which four questions are considered:

In addition, it suggests parents pay attention to the behavior they model via their own screen usage, remembering to:

The young people questioned by RCPCH have their own simple suggestions.

The report’s bottom line is that parents needn’t worry about screen time, per se. Existing research doesn’t support worries about any specific physiological dangers other than sleep disturbance from engaging in screen time just before bed. On the other hand, the research also doesn’t claim any benefits, either. Any positives young people derive from screen time would have to do with the content they consume. And the same is true of negative impacts.

The media is deliberately pushing your buttons.
Health

Black women are 3x more likely to die giving birth. Here’s one plan to fix that.
▸
7 min
—
with
Michael Dowling
Up Next
Communication

Business experts recommend transparency as a way to strengthen engagement by keeping employees in touch with the meaning and value of their work, and to help hold decision-makers accountable for […]