Can we use mountains as gigantic batteries for long-term energy storage? Such is the premise of new research published in the journal Energy.

The particular focus of the study by Julian Hunt of IIASA (Austria-based International Institute for Applied Systems Analysis) and his colleagues is how to store energy in locations that have less energy demand and variable weather conditions that affect renewable energy sources. The team looked at places like small islands and remote places that would need less than 20 megawatts of capacity for energy storage and proposed a way to use mountains to accomplish the task.

Hunt and his team want to use a system dubbed Mountain Gravity Energy Storage (or MGES). MGES employs cranes positioned on the edge of a steep mountain to move sand (or gravel) from a storage site at the bottom to a storage site at the top. Like in a ski-lift, a motor/generator would transport the storage vessels, storing potential energy. Electricity is generated when the sand is lowered back from the upper site.

How much energy is created? The system takes advantage of gravity, with the energy output beingproportional to the sand’s mass, gravity and the height of the mountain. Some energy would be lost due in the loading and unloading process.

Hydropower can also be employed from any kind of mountainous water source, like river streams. When it’s available, water would be used to fill storage containers instead of sand or gravel, generating electricity in that fashion. Utilizing the mountain, hydropower can be invoked from any height of the system, making it more flexible than usual hydropower, explains the press release from IIASA.

There are specific advantages to using sand, however, as Hunt explained:

“One of the benefits of this system is that sand is cheap and, unlike water, it does not evaporate – so you never lose potential energy and it can be reused innumerable times,” said Hunt. “This makes it particularly interesting for dry regions.”

Where would be the ideal places to install such a system? The researchers are thinking of locations with high mountains, like the Himalayas, Alps, and Rocky Mountains or islands like Hawaii, Cape Verde, Madeira, and the Pacific Islands that have mountainous terrains.

The scientists use the Molokai Island in Hawaii as an example in their paper, outlining how all of the island’s energy needs can be met with wind, solar, batteries and their MGES setup. 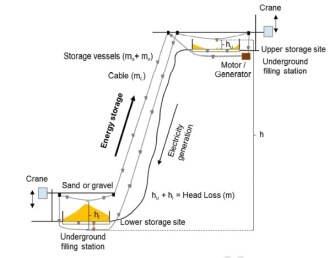 “It is important to note that the MGES technology does not replace any current energy storage options but rather opens up new ways of storing energy and harnessing untapped hydropower potential in regions with high mountains,” Hunt noted.

Check out the new study “Mountain Gravity Energy Storage: A new solution for closing the gap between existing short- and long-term storage technologies”.

Tags
ElectricityenergyEngineeringenvironmentglobal developmentgravityinfrastructuresolar energy
In this article
ElectricityenergyEngineeringenvironmentglobal developmentgravityinfrastructuresolar energy
Related
Life
Strange life forms create an “alien” ecosystem in an abandoned uranium mine
Slimy biofilms made up of bacterial and eukaryotic life forms have taken over an abandoned, flooded uranium mine in Germany.
The Present
Climate change is altering the chemistry of wine
Smoke taint from wildfires is gross, even to wine amateurs.
Life
Our antidepressant drugs are affecting animals and ecosystems
A toxicologist explains the impacts of antidepressants on fish — and no, they’re not getting any happier.
The Present
How heat pumps of the 1800s are becoming the technology of the future
Innovative thinking has done away with problems that long dogged the electric devices — and both scientists and environmentalists are excited about the possibilities.
Hard Science
200 years of exploring Antarctica
What we’ve learning from the world’s coldest, most forbidding, and most peaceful continent.
Up Next
Hard Science
Scientists find a new way to measure gravity
Researchers develop a novel method to measure gravity that can get much more information.