In the latest episode of Common Sense, Dan Carlin considers what’s being lost in the current age of terrorism. He posits the idea that America would look much different right now had 9/11 never occurred—terror as a main driver causing the rift between Left and Right. The word “terror” not even need be spoken to feel it lurking behind so much of our discontent.

That’s because, he continues, terrorists take advantage of our “human reaction,” which is, namely, security at any cost. The payment for this security, real or imagined, is huge:

To be so afraid turns off your natural filters. You no longer think what you’re sacrificing for this extra security is valuable at all.

What makes terrorism “so particularly abhorrent,” he continues, “is that it strikes against innocence.” In one of the best debates I’ve heard on this topic, Fareed Zakaria recently appeared on Sam Harris’s podcast. The two have long been at odds on Islamic terrorism. Zakaria reminds Harris that the predominant number of victims are Muslim, many, which Carlin also points out, are children. 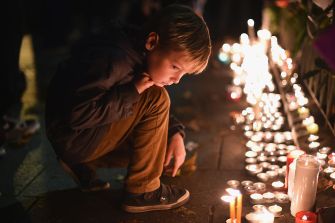 Carlin believes there are two ways out of this mess. The first is to normalize terrorism and adjust, which he considers the safer option. The worse road—one we’re witnessing evidence of regularly—is to allow terrorists to morph society in ways that forces citizens to act in ways we never would have had terrorism never existed. This means, for one, how we treat one another.

While the Zakaria-Harris conversation becomes heated (though never disrespectful), they agree that peaceful resolution is the goal—a lofty ambition, but ultimately the saving grace. Zakaria grew up Muslim in India, which he claims is predominantly secular. While he’s an atheist he advocates for not generalizing Muslims in one category nor denying their religiosity. Citing ancient scriptures as if all of Islam follows those codes today is his main criticism of Harris.

Yet new research claims religious terrorism is on the rise, and it appears that it is going to get worse before we see a decline in such horrendous acts. Whereas terrorism in the sixties was predominantly secular, writes University of California, Berkeley lecturer Bruce Newsome, the nineties gave birth to a new breed of religious terrorism, a wave that led to a more recent uptick which he dubs “newest terrorism.”

He makes the distinction in part between how terrorists today strike quickly instead of prolonging events with hijackings and hostages.

While the new terrorists prioritized spectacular lethality in long-planned hijackings or bombings of mass transit, offices or hotels, the “newest” terrorists encourage more frequent active violence, hostage-takings and kidnappings. They seek to kill in the most horrifying ways.

This means walking into a club and opening fire, driving a van through a crowded sidewalk, and taking a machete to passerby. More frequent small attacks are usurping large-scale 9/11-style tragedies, keeping us on constant alert, always on edge in fear of a suicide bomber or suspicious driver just around the corner.

And while Zakaria is certainly right that many Muslims do not promote such heinous acts, Newsome notes that religion is the catalyst. It is common to hear claims that these attacks “are not real religion,” a mistake that Harris, among others, frequently points out. Newsome writes that religious terrorists are more violent and deadly than secular counterparts, and that we should take them at their word.

And, of course, religious terrorists are social media experts, consummate marketers, both online and on the ground:

Newsome predicts that terrorism is going to get worse in the coming years. Religious extremism combined with an ability to build and access weapons and ease of communication are the culprits. It might be some time before we witness another 9/11 (if ever), but the uptick in smaller attacks appears to be imminent. How we deal with that fact—normalizing it; committing atrocities in the name of security; spreading secular education broadly—will be our great challenge in the coming years.

Derek’s next book, Whole Motion: Training Your Brain and Body For Optimal Health, will be published on 7/17 by Carrel/Skyhorse Publishing. He is based in Los Angeles. Stay in touch on Facebook and Twitter.

You can love a romantic partner, but also a pet, a book, God, or the sound of someone’s voice. We need many more words for love.
The Present

The “sonnenrad” used in shooters’ manifestos: a spiritual symbol of hate

The sonnenrad is a Heathen symbol composed of 12 repeated runes.
The Future

“Deadbots” can speak for you after your death

No ouija board required.
Up Next
Personal Growth

Our Personality Literally Changes How We See the World

People possessing openness can take diverging visual stimuli and combine them in a special way.