Without a doubt, climate change is the most pressing and complicated challenge that humanity collectively faces. Dealing with it appropriately will require a lot—we’ll need to change our lifestyles to put less stress on the planet, consume more conscientiously, and more diligently preserve species diversity. But we may be able to innovate our way out of this terrific mess we’ve found ourselves in. One way to do that would be to make scalable, efficient quantum computers.

Developing quantum computing capacities at a scale similar to modern computers or even supercomputers could enable us to solve many of the intractable problems that climate change poses to us. Here’s how.

What is quantum computing?

At the fundamental level, classical computers use bits to operate, simple pieces of binary information that can have two values: 0 or 1. Quantum computers take advantage of quantum particles’ weird ability to exist in several states simultaneously. Rather than represent a 0 or 1, a “qubit” can exist as both simultaneously.

Imagine you have four bits. Together, those four bits can have one of 16 possible combinations, such as 1011. Four qubits, however, can be in all 16 combinations at once. As more qubits get involved, these potential values grow exponentially, meaning that our computing power grows exponentially as well.

There’s quite a bit more involved, but the important thing to know is that quantum computers absolutely smoke classical computers when solving complicated problems. Some problems exist that would take a classical computer literally millions of years to solve that a quantum computer could solve in days or less. Solving these problems are the ones that are going to help us address climate change.

The Intergovernmental Panel on Climate Change (IPCC) has stated that cutting CO2 emissions isn’t enough to stop climate change; we’ll need to remove the CO2 that’s already in the atmosphere. To a large extent, we can accomplish this by planting more trees, but this isn’t a perfect solution. Trees take a long time to grow (and sequester carbon in so doing), can be prone to fires (which will become more common as the Earth warms), and are tempting targets for logging (which emits CO2).

Using chemical catalysts to capture CO2 for storage or to convert it into useful products is one way to overcome this. But existing catalysts tend to be made of expensive materials or are difficult to deploy. It’d be a huge step if we could identify cheaper, easier-to-make compounds that can scrub CO2 from the atmosphere more effectively.

But here, we run into a problem. Accurately simulating chemical compounds takes a lot of processing power. Every atom added to a compound makes simulation exponentially more difficult, requiring us to use our best guesses in a tedious trial and error process instead. Currently, quantum computers can simulate simple compounds with a few dozen qubits. Experts claim that if we could scale that up to around a million qubits, we would likely be able to simulate the compounds that are likely to be more effective at capturing CO2. 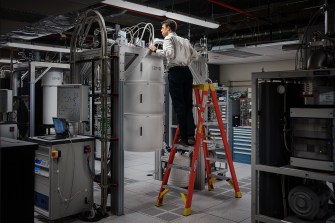 Almost every aspect of renewable energy technology is mature enough to replace traditional fossil fuels right now, save for one major stumbling block: battery technology. Fossil fuels function as a stable store by themselves, ready to undergo combustion to release the energy stored in gasoline or coal. But the pure electricity generated from solar energy or the turning of wind turbines needs to be stored somewhere, especially since the wind isn’t always blowing and the sun isn’t always shining.

Current batteries, however, are too expensive to implement at the scale needed to store the world’s energy needs, and they don’t store energy long enough. Like CO2-scrubbing catalysts, advances in battery technology are made through physical prototyping and testing. Using a quantum computer to simulate the complicated chemistry that hypothetically better batteries would employ would make this process many, many times faster.

This approach has attracted significant attention since batteries are such a widely used commodity. One notable example of first-movers in this arena is Mercedes-Benz, who has partnered with IBM’s quantum computing program in order to build better batteries for electric cars.

The Earth’s climate is an enormously complicated system with numerous sensitive components that interact with one another. Our current understanding of climate change is the result of decades of modeling work from thousands of researchers, and thanks to that work, we know what components of the Earth’s climate system pose the greatest risk, what we need to focus on, and when we need to act.

Understanding the climate informs our strategy and enables us to make better forecasts. At 2018’s SXSW conference, tech entrepreneur William Hurley suggested that quantum computing’s exponentially superior computing power could be used to model the many, many variables that go into the Earth’s climate system.

There are many more known applications of quantum computing that could benefit us in our fight against climate change. Odds are, there’s even more unknown applications that we’ll only discover once we begin playing around with this new technology.

It’s the ultimate technologist’s dream — a quantum leap that suddenly renders seemingly insurmountable challenges negligible. It’s important to remember, however, that we can’t put all our eggs in one basket. We can’t rest easy on the gamble that quantum computers will both mature quick enough and work effectively enough to solve every climate problem we’ve made for ourselves.

Addressing real-world challenges requires a mix innovation and adaptation. We need to develop better tools, faster computers, and more effective solutions as well as learn how to live with what has been allotted to us, to treat our environment more gently, and preserve the only planet we’ve got.

“Should they strike, each of them has an energy at impact equal to all of the nuclear weapons on Earth combined.”
Up Next
Starts With A Bang

How Certain Are We That Protons Don’t Decay?

Experiments such as Super-Kamiokande, which contain enormous tanks of (proton-rich) water surrounded by arrays of detectors, are the most sensitive tool humanity has to search for proton decay. As of […]