Though Marjorie Taylor Greene is scrubbing her social media conspiracy theory mongering clean after her victory in Georgia’s 14th Congressional District’s Republican primary, the internet’s graveyard is vast. Greene appears to be distancing from her belief in QAnon, an online “movement” founded on the idea that Donald Trump is secretly battling an elite cabal of pedophiles. She went so far to call the secretive Q “a patriot.”

Media Matters counts at least 75 current or former GOP congressional candidates that support the QAnon conspiracy theory. Thus far, 600,000 Americans have voted for Q-endorsing candidates. As with “Pizzagate”—the origin myth of QAnon—there have been real-world consequences. Q adherents have been tied to murders and kidnappings. The group also traffics in anti-Semitic rhetoric.

While our president is tied to an actual pedophile ring via his longtime friendship with Jeffrey Epstein and Ghislaine Maxwell (“I wish her well“), the QAnon conspiracy theory has been little more than a dangerous distraction. Popular “QAnon researcher” Jordan Sather uses his rhetorical bombast, in a page stolen from Alex Jones, to sell supplements and, I kid you not, pendants that provide “powerful protection from EMFs” (electromagnetic fields).

What’s a good conspiracy theory if you can’t monetize it?

One group that isn’t monetizing anything from QAnon—a group being actively harmed by it—is traumatized children, the very people these clicktivists somehow believe they’re helping. Sharing a conspiracy theory on social media is easy. Working to actually help victims of sexual abuse and child trafficking, not so much. In fact, if you want to “do the research,” it takes years of hard work, which is why I talked to Regan Williams earlier this week.

Williams is the founder and CEO of Seen and Heard, a Los Angeles-based nonprofit that helps foster youth develop character through the performing arts. She’s been involved with foster youth for years; I wrote about her work in child trafficking just over a year ago. Tragically, since that time, the situation for these children has only gotten worse, in large part because of QAnon.

Williams says child trafficking is an easy cause to rally people together. Fear is also a powerful unifying force, one that QAnon believers are already primed for via the news they consume. Almost every parent cares about their children, making them the ideal target to solidify groups.

The real problem, she says, is that the youth she works with are falling for these conspiracy theories. Trauma is a particularly powerful tool for indoctrination. If you’re a teenager that’s been abducted or abused, your trust level is already extremely low. Then you read about a global cabal of powerful men (and a few women) secretly abusing children, and the narrative seems ready-made for your personal history.

When Williams tried to “lovingly and kindly correct” the youth she was working with after learning about the Wayfair conspiracy, the girls’ response was, “well, who owns the media?”

“She goes from this small little thing to a QAnon talking point. I’ve been thinking about why she would believe such a preposterous idea—and there are others; it’s not just one student, and they’re in in deep. I think that when something horrific happens to you as a child, it’s a lot easier to distance yourself from the immediate reality that it was an uncle or a parent or a sibling that hurt you. By detaching from that immediate person, they project it onto Bill Gates or Chrissy Teigen. Then it’s not so personal, it’s global.” 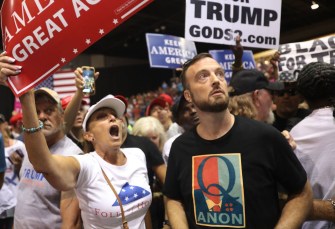 A man wear a shirt with the words Q Anon as he attends a rally for President Donald Trump at the Make America Great Again Rally being held in the Florida State Fair Grounds Expo Hall on July 31, 2018 in Tampa, Florida.Photo by Joe Raedle/Getty Images

As Williams mentions, there are over 30,000 kids in foster care in the Los Angeles area alone. It’s easy to fall through the cracks. The systems in place aren’t perfect; they’re certainly underfunded. When you’re in a system trying to support you yet isn’t capable of doing so, viewing the world as imperfect, and even harmful, becomes the lens through which you see reality. Again, this makes for a perfect indoctrination tool.

One popular QAnon talking point is that 800,000 children are missing. As Williams says, child trafficking experts “don’t buy this for a minute.” The number makes for a good meme but a poor representation of the problem.

To source better data, Williams turns to the National Center for Missing and Exploited Children (NCMEC) and the National Crime Information Center (NCIC). An important factor when reading data: if a teacher and a caregiver report a missing child to NCIC, that counts as two children, not one, which accounts for some of the fluctuations in numbers. In total, between 25,000 and 29,000 kids go missing every year. Importantly, 94 percent of those children are recovered within four to six weeks.

“They’re not documenting the recovery rate. It’s not like these numbers are perpetually hanging out there. So this 800,000 number is just ludicrous.”

Williams compares what’s going on to Black Lives Matter. Blacking out your Instagram profile picture is performative. It signals that you actually care, which is great, but if you’re not supporting Black-owned businesses, for example, there are no teeth to your activism.

Of course, blacking out your profile doesn’t cause the real-world harm the QAnon virus does. Sharing misinformation is ultimately harmful to the children in need of help. Williams offers the resources below—ranging from donations to nonprofits to educational trainings to becoming a foster parent—for people that actually want to do something to help victims of sexual and physical abuse. They might not make a great Twitter meme, but in the actual world, this support makes all the difference.

Tags
activismcorruptionglobal issuesInequalitypoliticsyouth
In this article
activismcorruptionglobal issuesInequalitypoliticsyouth
Related
The mind-blowing stats on male inequality
Male inequality — the enormous cultural shift happening right under our nose.
▸
15 min
—
with
Richard Reeves
Putin’s war: “The single biggest geopolitical mistake since 1989”
“This is much deeper than just ‘let’s figure out how we can get both sides to get along.’”
▸
15 min
—
with
Ian Bremmer
How resisting conformity can lead to real world progress
Thinking as a group and going along with the loudest voices can feel easy and even natural. But to make real positive change in our world, it’s important to hear all voices and question the perceived majority.
▸
5 min
—
with
Todd Rose
10% of people are dominating social media. What if the other 90% spoke up?
Social media isn’t the majority – it’s the vocal fringe.
▸
with
Todd Rose
The Big Think Interview
Why the world needs cults
Scientology, QAnon, and Heaven’s Gate: why do we seek healing from cults?
▸
with
Jamie Wheal
Up Next
Strange Maps
Here’s a map of Mars with as much water as Earth
A 71% wet Mars would have two major land masses and one giant ‘Medimartian Sea.’