The United States of America, land of the free, is home to 5 percent of the world’s population but 25 percent of its prisoners. The cost of having so many people in the penal system adds up to $80 billion per year, more than three times the budget forNASA. This massive system exploded in size relatively recently, with the prison population increasing by six-fold in the last four decades.

Ten percent of these prisoners are kept in private prisons, which are owned and operated for the sake of profit by contractors. In theory, these operations cost less than public prisons and jails, and states can save money by contracting them to incarcerate people. They have a longhistory in the United States and are used inmany othercountries aswell.

However, despite the pervasiveness of private contractors in the American prison system, there is not much research into how well they live up to their promise to provide similar services at a lower cost to the state. The little research that is available often encounters difficulties in trying to compare the costs and benefits of facilities with vastly differentoperations and occasionally producesresults suggesting there are fewbenefits to privatization.

A newstudy byDr. Anita Mukherjee and published in theAmerican Economic Journal: Economic Policy joins the debate with a robust consideration of the costs and benefits of private prisons. Its findings suggest that some private prisons keep people incarcerated longer and save less money than advertised.

The study focuses on prisons in Mississippi. Despite its comparatively high rate of incarceration, Mississippi’s prison system is very similar to that of other states that also use private prisons. Demographically, its system is representative of the rest of the U.S. prison system, and its inmates are sentenced for similar amounts of time.

The state attempts to get the most out of its privatization efforts, as a 1994law requires all contracts for private prisons in Mississippi to provide at least a 10 percent cost savings over public prisons while providing similar services. As a result, the state seeks to maximize its savings by sending prisoners to private institutions first if space if available.

While public and private prisons in Mississippi are quite similar, there are a few differences that allow for the possibility of cost savings by private operators — not the least of which is that the guards are paid 30 percent less and have fewer benefits than their publicly employed counterparts.

The results of privatization 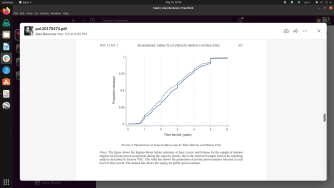 The graph depicts the likelihood of release for public (dotted line) vs. private (solid line) prison inmates. At every level of time served, public prisoners were more likely to be released than private prisoners.Dr. Anita Mukherjee

The study relied on administrative records of the Mississippi prison system between 1996 and 2013. The data included information on prisoner demographics, the crimes committed, sentence lengths, time served, infractions while incarcerated, and prisoner relocation while in the system, including between public and private jails. For this study, the sample examined was limited to those serving between one and six years and those who served at least a quarter of their sentence. This created a primary sample of 26,563 bookings.

This in turn might be due to the much higher infraction rate in private prisons compared to public ones. While only 18 percent of prisoners in a public prison commit an infraction, such as disobeying a guard or possessing contraband, the number jumps to 46 percent in a private prison. Infractions can reduce the probability of early release or cause time to be added to a sentence.

It’s unclear why there are so many more infractions in private prisons. Dr. Mukherjee suggests it could be the result of “harsher prison conditions in private prisons,” better monitoring techniques, incentives to report more of them to the state before contract renewals, or even a lackadaisical attitude on the part of public prison employees.

What does all this cost Mississippi?

The extra time served eats 48 percent of the cost savings of keeping prisoners in a private facility. For example, it costs about $135,000 to house a prisoner in a private prison for three years and $150,000 in the public system. But longer stays in private prisons reduce the savings from $15,000 to only $7,800.

As Dr. Mukherjee remarks, this cost is also just the finance. Some things are a little harder to measure:

“There are, of course, other costs that are difficult to quantify — e.g., the cost of injustice to society (if private prison inmates systematically serve more time), the inmate’s individual value of freedom, and impacts of the additional incarceration on future employment. Abrams and Rohlfs (2011) estimates a prisoner’s value of freedom for 90 days at about $1,100 using experimental variation in bail setting. Mueller-Smith (2017) estimates that 90 days of marginal incarceration costs about $15,000 in reduced wages and increased reliance on welfare. If these social costs were to exceed $7,800 in the example stated, private prisons would no longer offer a bargain in terms of welfare-adjusted cost savings.”

It is possible that the extra time in jail provides benefits that counter these costs, such as a reduced recidivism rate, but this proved difficult to determine. Though it was not statistically significant, there was some evidence that the added time actually increased the rate of recidivism. If that’s true, then private prisons could be counterproductive.

The EU is slowly realizing that it cannot count on the U.S. to meet its security needs. Has the time finally come for a European military?
Health

What started as a viral case of public shaming has morphed into a dark story involving internet sleuths, a criminal network, and the suspicious death of a 62-year-old man in St. Louis.
Up Next
Health