Should we abolish the 13th Amendment? No, no we shouldn’t. Slavery is a grotesque, immoral practice, one that stands unequivocally among humanity’s greatest sins. Enshrining the abolishment of slavery into the supreme law of the United States was a necessary step in the country’s moral progress. I mean, who would even suggest such a thing?

On Sunday, the rapper tweeted a picture of himself wearing a Make America Great Again hat with the message: “this represents good and America becoming whole again. We will no longer outsource to other countries. We build factories here in America and create jobs. We will provide jobs for all who are free from prisons as we abolish the 13th Amendment. Message sent with love.”

Social media exploded at the suggestion, and the outburst quickly became trending new. West followed up with a tweet to clarify that he meant “amend” the 13th Amendment, not “abolish” it.

Meagan Flynn, a reporter for The Washington Post, speculated that West may be referring to the “13th Amendment’s exception clause,” a clause added to the Amendment that many scholars argue undermines its purpose. West thanked The Post for its coverage, suggesting that’s what he meant the whole time.

But what is the exception to the 13th Amendment, and why do some scholars find it so problematic? 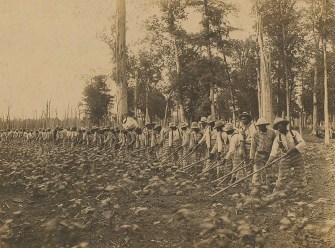 Prisoners of Mississippi’s notorious Parchman Farm hoeing in a field (1910).

The abolishment* of slavery

The 13th Amendment was ratified on December 6, 1865, and abolished slavery as a legal practice in the United States. Here’s the Amendment’s full text: “Neither slavery nor involuntary servitude, except as a punishment for crime whereof the party shall have been duly convicted, shall exist within the United States, or any place subject to their jurisdiction” (emphasis ours).

That emphasized clause is the penal labor exemption, aka the “punishment clause” or “convict exception clause.” Basically, slavery remains legal in the United States but only for convicts, who can be forced to perform labor while in custody. Those who refuse to work face punishment. The Virginia Supreme Court summed up the situation pithily when it remarked in an 1871 case that prisoners were the “slaves of the state.”

In her piece, Flynn notes that the Amendment’s language can be traced back to the Northwest Ordinance of 1787. The ordinance outlawed slavery in the Northwest Territory while retaining it as a form of punishment. Hard work, the thought went, was essential to moral reform.

In the post-antebellum U.S., it wasn’t long before the States began to re-institutionalize forced labor, especially African-American labor, using the punishment clause’s vague language as justification. Erik Loomis, professor of history at the University of Rhode Island, chronicled this historical abuse in The New York Times:

Almost immediately, states, especially in the South, used [the punishment clause] to control black labor. They began rounding up ex-slaves after the war, passing vagrancy laws that allowed the state to sell their labor. Congressional interference during Reconstruction briefly limited this practice, but by the late 19th century, white rule created a huge economic sector based upon unfree black labor, especially in the prison chain gangs at institutions such as Mississippi’s notorious Parchman Farm, a symbol of the Jim Crow era’s murderous regime against black people, as well as in contract labor, where private employers worked black prisoners into the grave. Increasingly, prison authorities compelled labor out of nonblack prisoners as well.

The civil rights movement fought against this milieu but did not end it. As late as the 1970s, Loomis notes, prisoners in Texas were being used to pick cotton for no pay in segregated prison gangs. Texas prisoners instituted a prison strike in 1978, and by 1980, the Texas system was ruled unconstitutional.

The Texas inmate strike was well-publicized but despite their victory, changes to the U.S. penal system have been glacial.

Arizona’s Tent City prison was infamous for its inhumane conditions. It was overcrowded, prisoners remained outdoors at all times in the Arizona heat, and many were forced to work in chain gangs for no compensation. Although closed last year, Tent City remained operational for more than two decades, despite groups like Amnesty International protesting the conditions as abuses of inmates’ civil rights.

In August of this year, inmates planned a nationwide strike to bring attention to prison conditions, listing low wages and the reestablishment of voting rights for ex-felons among their concerns.

Some states do compensate prisoners for their labor, but wages are meager. According to the Prison Policy Initiative, prisoners are paid less today, on average, than in 2001. Its data show that the average minimum daily wage paid for regular prison work is 86 cents, with an average maximum of $3.45.

States such as Arkansas and Georgia provide no compensation. (One imagines these state’s legislators still believe that incarcerated individuals remain “slaves of the state,” even if such words can’t be uttered today.)

Opponents to the current penal labor system aren’t arguing that inmates shouldn’t work, but that the work needs to be humane, meaningful, and fairly compensated. Jim Liske, president of Prison Fellowship, argued such a case:

Meaningful work can be part of a restorative corrections policy [emphasis original]. Many prisoners need to learn skills that will make them employable after release. Prison jobs also help people maintain a sense of purpose and structure during long sentences. Society as a whole also benefits when prisoners’ labor allows them to pay restitution. But slavery — labor that dehumanizes one person for the profit of another — has no place in prisons or in the Constitution.

Such punishments and cruel conditions may be foisted on any prisoner, regardless of race and gender. However, it should be noted that African- and Hispanic-Americans remain over represented among prison population. Blacks make up 12 percent of the U.S. population, Hispanics 16 percent. But they represent 33 and 23 percent of incarcerated individuals, respectively. Whites, by comparison, make up 64 percent of the population but only 30 percent of inmates. 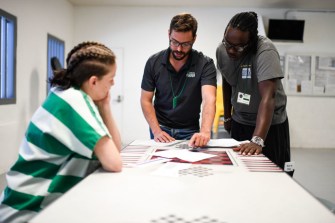 Others have argued that the 13th Amendment needs to be reconsidered in light of sexual slavery as well. Sexual slavery is the practice in which inmates treat other inmates as sex slaves, raping them and trading them to others for favors or commodities. The practice is considered underreported and widely ignored.

Estimates for how many people are sexually abused in U.S. prisons each year vary, but according to a U.S. Department of Justice 2011-12 report, about half of reported incidents involved a prison staff member. Lovisa Stannow, executive director at Just Detention International, points out that consensual sex with an officer “is not possible when one party literally holds the key to the other one’s freedom.”

The law does provide protections for inmates. The Eighth Amendment provides protection against cruel and unusual punishments, and the Prison Rape Elimination Act, passed in 2003, creates a mandate for research into prisoner rape and to develop standards to prevent the practice. And the implementation of national standards is bringing more data to light.

However, as law clerk Kamal Ghali noted in the UCLA Law Review, there is something perverse about an inmate not being able to use the 13th Amendment to strengthen a claim of wrongdoing in cases of sexual slavery.

[…] Obviously, prison officials that cruelly and intentionally enslave prison inmates act in flagrant violation of the Eighth Amendment. Nonetheless, there is something unseemly about excluding government-perpetuated slavery from the scope of the Thirteenth Amendment. While the intention-based approach has the advantage of allowing prisoners to bring some claims, it has the major drawback of letting prison officials off the hook for their intentional acts of slavery.

Given all of this, is Kayne West right? Should we amend the 13th Amendment to remove the punishment clause? That obviously depends on how we amend it, and West was mum on the details. (Turns out Twitter isn’t the best place to discuss thorny legal issues with deep historical roots. Go figure.)

But there is precedent. As Flynn points out in her article, Senator Charles Sumner of Massachusetts fought against the Amendment’s wording even as it was being drafted. His preferred version read: “All persons are equal before the law, so that no person can hold another as a slave: and the Congress shall have the power to make all laws necessary and proper to carry this declaration into effect everywhere within the United States and the jurisdiction thereof.”

Sumner’s revision provides a good starting point, and the U.S. needs to reinvest in serious discussions on how to close this legal loophole. Because while the Eight Amendment may protect against cruel and unusual punishment, as long as the 13th Amendment remains as written, our status quo can be neither cruel nor unusual in the eyes of the law.

Soviet researchers studied crime through a Marxist-Leninist lens. Under Lenin, a humanitarian approach to criminality briefly emerged, but dissipated when Stalin rose to power.
Up Next
Health

Will Canada run out of legal pot during the first year of sales?

Canada’s recreational marijuana industry might not be poised to meet demand in the first year of legal sales, according to some experts.