Sex has never been easy for humans. In practice, perhaps, but add in a layer of ethics and suddenly how, when, and with whom we share our bodies with has long been contentious. Some argue that promiscuous primates reveal our true nature, while others declare that monogamy is the godly way. In his behavioral tour-de-force, Behave, neuroendocrinologist Robert Sapolsky says we’re actually somewhere in between: animals that spread and receive seed broadly, and animals that devote themselves to only one other.

Makes sense that religion would take up the role of how we use our bodies, even if certain mandates put more emphasis on suppression over exploration. Humans are curious animals. Tell us an act is prohibited and you ensure participation. Much confusion has resulted from this intersection between faith and desire.

The Mormon church has long dealt with this conundrum. Shortly after Joseph Smith founded the religion in 1830 he had a vision of his deceased brother, Alvin, prancing around in heaven. Due to this vision, he invented the concept of “sealings” in 1836, which states that family members reunite in heaven by undergoing certain rituals during life. It just so happened that in its early days Mormonism appealed to men more than women, so the rules favored that gender.

Enter polygamy. Smith used the Bible whenever it served his purposes, as most offshoots of Christian, Muslim, and Jewish faith do to this day. He turned to Abraham for guidance. Since men were the drivers of early Mormonism, Smith figured that women and children could be “sealed” through them. As Mormon scholar (and Mormon herself) Joanna Brooks writes: “Smith taught that a righteous man could help numerous women and children go to heaven by being “sealed” in plural marriage.” The more women a man could seal, the better.

Here, sealing is explained by a Mormon YouTube channel.

By 1843 Smith privately overlooked plural marriages among church leaders even as the 1844 edition of the faith’s Doctrine and Covenants explicitly supported monogamy. Smith always publicly denounced plural marriages. Yet after his death it was revealed that he had between 29-48 wives besides his public wife, Emma. Emma swore none existed. Plenty of evidence shows otherwise.

In 1844, Smith was murdered. His successor, Brigham Young, took up the cause. His stated reservations did not stop him from taking multiple wives—51 in total, having 56 children with 16 of them. Other leaders partook in what they termed “spiritual wifery.” In 1852 polygamy became an official Mormon Church practice, and the shift was announced in the group’s new home, Salt Lake City. In 1876 polygamy was included in the Doctrine and Covenants.

In the years between 1852 and 1890, somewhere between 20-30 percent of Mormons practiced polygamy. In 1890, the church’s fourth president, Wilford Woodruff, expressed concerns. Just like Joseph Smith supposedly received a divine revelation in the form of golden tablets, which led to the formation of Mormonism, Woodruff claimed he had his own discussion with God, resulting in the church’s “Manifesto.” Polygamy was out:

The Lord showed me by vision and revelation exactly what would take place if we did not stop this practice. If we had not stopped it, you would have had no use for … any of the men in this temple … for all (temple sacraments) would be stopped throughout the land. … Confusion would reign … and many men would be made prisoners. This trouble would have come upon the whole Church, and we should have been compelled to stop the practice.

Mormons had always faced social and political persecution, but things really ramped up in 1856 when the Republican party platform related polygamy with slavery. Mormons were in a bind. Church leaders wanted to stay true to Smith’s teachings, but they also wanted to not be persecuted. Behavioral rules, such as a ban on smoking and drinking and a conservative view on sexuality, became required of the faithful to save face.

Then, in 1878, the Supreme Court banned polygamy across the United States. By 1887 the government was seizing Mormon church assets for their continued practice. Woodruff officially abolished the practice upon realizing his church was in danger of being shut down. 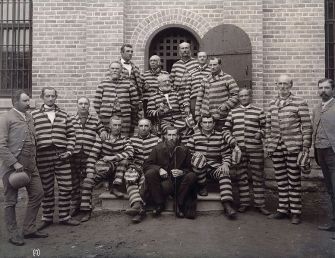 Portrait of Mormonpolygamists in prison, at the Utah Penitentiary, circa 1889.

Some men were not happy. Polygamy wasn’t new to the world. Historically plural marriages were social contracts. If a man had enough resources to support multiple wives, it made sense that he would look after them. By the 20th century, views on women’s roles at home and in the workforce were rapidly changing. Many echoed the sentiment that polygamy was in fact a form of enslavement.

A rogue group of Mormons fled to Mexico to escape what they perceived as ungodly regulations. A wave of fundamentalism kicked off around the time of the Great Depression that persists today. If polygamy was good for Smith, it certainly is good for these believers. In 1904 church president Joseph F Smith disavowed polygamy in front of Congress, issuing yet another manifesto. This created an even larger schism in his church.

Today, the LDS Church continues to promote monogamy, and while polygamy is illegal in the United States, small pockets of Mormons exist in the Rocky Mountains, where they freely practice what they refer to as “the Principle.” These groups of fundamentalists believe they’re staying true to Joseph Smith’s revelation.

Earlier this year, Lyle Jeffs, at the time leading one of those 1930s era offshoots, the Fundamentalist Church of Jesus Christ of Latter Day Saints, was arrested for a food stamp fraud and money laundering. His brother, Warren, was convicted of child sexual assault in 2011 after marrying 12- and 15-year-old girls. Warren had dozens of wives, while Lyle was tamer, marrying just nine times. In both of these cases their polygamy dominated headlines.

So while the Mormon Church publicly denounces polygamy, it lives on. Joanna Brooks says this is in part because the doctrine supporting it was never officially changed. In a kind of spiritual loophole, it is a mainstream Mormon belief that polygamy is part of the afterlife.

The LDS Church publicly renounced the practice of polygamy in 1890, but it has never renounced polygamy as doctrine, as evidenced in LDS scriptures. It has always permitted and continues to permit men to be married in Mormon temples “for the eternities” to more than one wife.

As long as this rift between public banishment and private winks and nods continues, the question of plural marriage will continue, regardless of what laws are being enforced. Old habits are hard to break.

Nikolaas Tinbergen’s concept of “supernormal stimulus” explains why humans are attracted to a heightened version of reality.
Strange Maps

Birthrates are cyclical and have gone up and down throughout history.
The Past

When the mutual relatives of two royal families died, the countries were likelier to go to war.
Strange Maps

For a purely binary choice, wearing a ring either on the left or right hand can say a lot about the wearer.
Up Next
Starts With A Bang

It’s incredibly simple and straightforward, and the science doesn’t lie. (And yes, global warming played a role!)“The hurricane flooded me out of a lot of memorabilia, but it can’t flood out […]