In 1905, the muckraking journalist, Samuel Hopkins Adams, published an 11-part series on patent medicines for Collier’s. Packaged as “The Great American Fraud,” Adams pointed out that many patented medicines were causing harm to consumers. His reporting helped lead to the Pure Food and Drug Act of 1906.

This was a different era in journalism. In 1906, Upton Sinclair published “The Jungle,” which also influenced the above congressional action (as well as the passage of the Meat Inspection Act). While President Roosevelt decried Sinclair as a socialist crackpot, he relented after reading the book and appointed inspectors to investigate the meatpacking industry.

Imagine that: A president who reads and even acts on criticism of his administration.

During this era of eye-opening exposés, consumer advocacy groups demanded better public health programs and governmental intervention in health care. As a new research article published in the Journal of Bioethical Inquiry points out, these women-founded and led programs pushed back against junk science and lack of oversight.

While the article details essential work female groups performed during the last century, it concludes with startling data regarding the corporate takeover of modern advocacy organizations by pharmaceutical lobbyists. The takeover was intentional.

Advocacy groups were founded with the best of intentions. As the authors—Sharon Batt, Judy Butler, Olivia Shannon, and Adriane Fugh-Berman—write,

“Some women’s clubs moved this knowledge to the level of ‘citizen science,’ pushing to establish local health boards, then demanding the boards investigate the problems they documented. The women also provided fodder for muckraking journalists, bringing sensational cases to the attention of local newspapers and women’s publications to be investigated and exposed.”

The Corruption That Brought Prozac to Market — Robert Whitaker, Journalistwww.youtube.com

Consumer-oriented groups gained steam over the ensuing decades. Their efforts helped inspire the 1938 Food, Drug, and Cosmetic Act after over 100 people (mostly children) died from a sanctioned drug, Sulfanilamide. If not for the hard work of these advocates, this case might have been overlooked.

Early efforts also focused on the food industry, which was increasingly using chemical preservatives. The origin of Consumer Reports can be found in the consumer advocacy movement. Both the food and drug industries were getting a free pass to experiment on citizens with few repercussions.

These movements provided a social foundation for important advocacy work in the second half of the century. Female-led groups evolved to focus on women’s reproductive rights, AIDS, and mental health. As the authors write, these groups struck a balance between working with and against current trends. Sometimes you need to craft legislation with officials; at other times, you have to rage against the machine with everything you’ve got.

Advocacy marked an important turning point in public health (and culture in general). These groups were tired of placating to a medical model that treated the male body as the standard. This wasn’t limited to anatomy. As I wrote about last week, a high-profile 1970s-era conference about the role of women on Wall St featured no women on stage. You can imagine what reproductive health looked like during that time.

Advocacy groups made real impact in public health. Then the money began pouring in.

“These groups were funded largely by individual donations with some foundation support, but in the late 1980s, newer women’s health groups moved to professionalize, effectively splitting the women’s health movement.”

A number of groups resist corporate ties to this day, such as the National Women’s Heath Network and Breast Cancer Action. Too often, however, groups argue that their existence depends on corporate funding. This can lead to uncomfortable compromises.

An estimated two-thirds of patient advocacy groups in America accept funds from the pharmaceutical industry. Pharma companies gave at least $116 million to such groups in 2015 alone.

For example, over a three-year period, the National Alliance on Mental Illness (NAMI), which was founded by two mothers whose sons suffered from schizophrenia, received nearly $12 million from 18 pharmaceutical companies. The largest donor was Prozac manufacturer, Eli Lilly. By 2008, three-quarters of NAMI’s budget was funded by the pharmaceutical industry. It gets worse:

“An Eli Lilly executive was even ‘on loan’ to NAMI, paid by Eli Lilly, while he worked out of the NAMI office on ‘strategic planning.'” 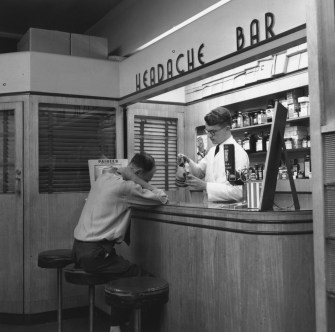 A customer waiting for his medication at the Headache Bar in a pharmacy in Sydney, Australia. Among the items on sale are ‘Paigees with Chlorophyll’ and Alka Seltzer on tap.Photo by Dennis Rowe/BIPs/Getty Images

This influx of cash skews public understanding of drugs. It also influences advocates to overlook real problems caused by pharmaceutical interventions, especially when it comes to mental health.

For a real-world example, consider how Xanax came to market. As journalist Robert Whitaker explains, an initial study was conducted to determine efficacy in treating panic attacks. After four weeks, Xanax was outperforming placebo, which is common with benzodiazepines over short-term usage. But it wasn’t a four-week study; it was a 14-week study.

At the end of eight weeks, there was no difference in efficacy between Xanax and placebo.

At the conclusion of the study after 14 weeks, the placebo outperformed Xanax. By a lot.

Why is Xanax still prescribed for panic attacks? Because the pharmaceutical company, Upjohn, only published the four-week data. The 14-week data was not in its favor. Nearly forty years later, over 25 million Americans receive a prescription despite its long list of side effects and addictive profile.

As the authors note, many consumers are not aware of how advocacy groups are funded.

That’s a tangled web of relationships. Pharmaceutical industry funding negatively impacts the work advocacy groups should be focused on: protecting us. NAMI, for example, claims that as a “natural ally” to the pharmaceutical industry, it helps consumers access “all scientifically proven treatments.” When the industry ignores evidence of long-term damage caused by its treatments, you have to wonder what’s being advocated.

Although, as the authors conclude, that question is easy to answer.

“Instead of drawing insights from patient experience to set organizational agendas and challenge industry agendas, today’s groups are silent on high prices and drug harms, oppose efforts to regulate these basic rights, and demand access to drugs that challenge the safety and effectiveness.”

A new study looks at what happens when you get infected with two viruses at the same time.
Health

Hospitals often deal with the aftermath of gun violence, but they can play a key role in preventing it.
▸
5 min
—
with
Michael Dowling
The Past

In ancient Greece, the Olympics were never solely about the athletes themselves.
The Past

Smallpox was nothing new in 1721.
Up Next
The Present