Mark Twain once said that God created war so that Americans would learn geography. Twain died before World War I, but his sardonic remark still has meaning for us. America continues to fight wars in unfamiliar places, and our unfamiliarity with those places does not—for better or worse—seem to deter the fighting.

Contemporary American history is marred by the scars of nation building. The attempt to directly establish American-style democratic institutions in Iraq and Afghanistan has failed, just as it did in Vietnam. In the final cable sent from the American embassy in Saigon, as the city was falling to Vietcong and North Vietnamese forces, a prophetic warning was sent to Washington DC by CIA station chief Thomas Polgar:

“It has been a long fight and we have lost. . . . Those who fail to learn from history are forced to repeat it. Let us hope that we will not have another Vietnam experience and that we have learned our lesson. Saigon signing off.”

To be sure, Iraq and Afghanistan are not another Vietnam. Nonetheless, the costs of nation building remain high. Occupying foreign countries, appointing leaders to their governments, and deploying American ground troops to stamp out opposition all require that American blood and treasure be spent.

According to Stephen Walt, Harvard Professor of International Affairs, more than one trillion dollars has been spent in Afghanistan since the arrival of American forces. In Iraq, that number is between $3-5 trillion, depending on how you do the accounting.

Would any harm have come to the United States had we not intervened directly in Iraq and Afghanistan? It is surely possible, though we’ll never know for certain. But spending $4-6 trillion abroad does come at a direct cost, said Walt in an interview with Big Think.

“Nation building around the world is expensive. And you can use that money for a variety of purposes here at home, or you can leave it in the taxpayer’s pockets—either one would be an obvious benefit.”

Second, it would save American lives because we’ve lost soldiers in those conflicts to no good purpose—some of them killed, many wounded, some of those wounded quite grievously—so reducing that would be good for the United States.” 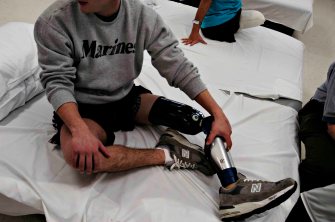 Corey Webb, of Springville, AL takes a break during his daily workout as members of the Disabled American Veterans visit wounded soldiers who have recently returned from Iraq and are now at Walter Reed Army Medical Center in Washington, DC on January 7, 2005. (David S. Holloway/Getty Images)

Contrast that to the 2012 presidential election when America’s domestic agenda was led by healthcare reform. At that time, 59% of voters cared strongly about terrorism and 52% cared about foreign policy. Still recovering the Great Recession, the nation was turned inward, and ISIS had yet to gain much ground in the Middle East—or coverage in global media. 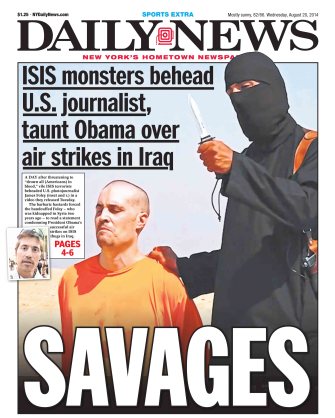 Violent, direct intervention does not create goodwill for America abroad. Toppling governments in Iraq and Libya, and intervening in Syria’s civil war, created a space in which bad actors could organize.

“The problem of Islamic terrorism and other forms of violent extremism would be substantially reduced,” said Walt, “if the United States were not intervening in as many places, especially in the Arab and Islamic world.”

It wouldn’t disappear. It wouldn’t totally vanish. It wouldn’t solve all the world’s problems, but much of the energy that has fueled the ranks of Al Qaeda, or groups like ISIS, is hostility to what they regard as illegitimate foreign interference in their societies. And if we stop doing that, a lot of that energy will eventually dissipate.” 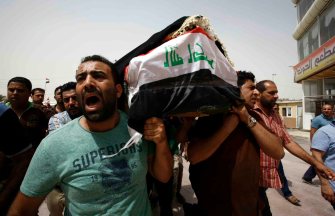 Iraqi men carry a coffin in the holy Iraqi city of Najaf on July 3, 2016, during a funeral procession for the victims of a suicide bombing that ripped through Baghdad’s busy shopping district of Karrada. The blast hit the Karrada district early in the day as the area was packed with shoppers ahead of this week’s holiday marking the end of the Muslim fasting month of Ramadan, killing at least 75 people in the deadliest single attack this year in Iraq’s capital.(HAIDAR HAMDANI/AFP/Getty Images)

By now, much has been made of President Trump’s Twitter habits. The disruptive, 140-character messages dispatched at odd hours have led some to question the President’s attention span. Foreign Policy reported that even NATO leaders had a strategy to keep the attention of the American president. The would limit remarks made by foreign heads of state to between two and four minutes.

“Just think of the number of hours that President Bush, President Obama, now President Trump have had to spend wondering about what to do about Yemen?” said Walt on the topic of attention span. “What do we do about Libya? What’s going on in Afghanistan? Who should my commander be?”

Presidents spend endless hours trying to manipulate the politics of countries far away instead of doing what we really would like them to do, which is spending almost all of their time thinking of ways to improve the lives of Americans in the United States.”

Would an end to interventions like those in Afghanistan and Iraq betray a lack of commitment to American values? Walt seems assured it is the opposite: “Trying to run the world is a distraction from things we need to be working on closer to home.” A greater priority, he says, is making America more reflective of the rights we claim to revere—”freedom of speech, openness, freedom of association, and things like that.”

In other words, lead by example. We don’t need such costly geography lessons.

Related
Life
Scientists use CRISPR to insert an alligator gene into a catfish
Disease kills off 40% of farmed catfish. This gene protects them.
Neuropsych
How you breathe affects your brain
Your breathing rhythm influences a wide range of behaviors, cognition, and emotion.
Health
What happens when regular porn watchers abstain for a week?
Researchers watched for signs of withdrawal — but didn’t find any.
Neuropsych
Daily caffeine intake temporarily alters your brain structure
Compared to people who took a placebo, the brains of those who took caffeine pills had a temporarily smaller gray matter volume.
Thinking
Why you should laugh at yourself, according to Seneca and Nietzsche
“It is more human to laugh at life than to lament it.”
Up Next
Mind & Brain
Universal Brain Activation Discovered When Reading Stories
New research at USC shows universal brain activity in the comprehension of stories for the first time.