One turn changes everything in downtown Los Angeles. Capturing the severity of Skid Row is impossible. The infamous tent city extends for blocks. Shuttered storefronts are backdrops to new cities, new economies, old problems. One moment you’re passing landmark buildings, boutique hotels, and chic restaurants; the next, you’re in the middle of the worst housing crisis in America. Well, lack of housing problem.

Because homelessness, as George Carlin used to say, is a misnomer. It’s houselessness these people suffer from. Without houses, the city’s 39,000 residents who exclusively live outdoors — the largest such population in the nation — are experiencing one of the coldest winters in recent memory, causing an uptick in deaths from hypothermia. Forty degrees is freezing to an unprepared populace, sunshine jokes aside. Overall, the city’s unhoused population is estimated to be 50,000.

Which has left the city struggling for resources. In 2017, a “homeless sales tax” was implemented in many parts of Los Angeles County, though the revenue gained has not shown any sign of decreasing the number of residents living on the streets. Good intentions have not produced credible results. The $138 million promised by mayor Eric Garcetti was plagued with problems from the outset.

Unable to rely on a system riddled with governmental bureaucracy, outside organizations are battling the issue on their own terms. Enter Healthy Housing Foundation, part of the AIDS Healthcare Foundation. While the organization prioritizes individuals with chronic diseases, they are hoping to house as many people as possible. One method they’re finding success with involves renovating old hotels to provide low-cost housing.

Affordable apartments are practically non-existent in Los Angeles, especially anywhere near downtown and west to the Pacific. In the midst of a housing boom, every new structure is some iteration of luxury apartment. The median price for a one-bedroom apartment is $1,360, though the average rent downtown is $2,658. HHF is offering rooms for as low as $150.

So far the organization has made three purchases near Skid Row — the Baltimore, Madison Hotel, and the King Edward — as well as a Sunset 8 Motel in Hollywood. The plan for the latter is to sell each unit no higher than $200,000, with half of those units below $100,000. This means city and national services must remain active, at least until residents gain employment. Sadly, the city’s promises are faltering at the moment.

In 2016, Los Angeles voters approved Prop HHH, backing city-sponsored construction and repurposing projects for homeless and at-risk populations. The first project broke ground in December 2017 in East Hollywood: 122 new units sponsored by PATH Ventures. According to an HHH tracking website, 2,788 units have been funded and $442 million appropriated for the project. There’s another site listing proposed projects in the pipeline.

One stumbling block has been NIMBY. When a developer wanted to build a 49-unit building in Boyle Heights in 2018, which abuts downtown to the east, owners of a neighboring shopping center sued. It’s an expectable response: voters want to support the homeless in principle, so long as it’s nowhere near them. 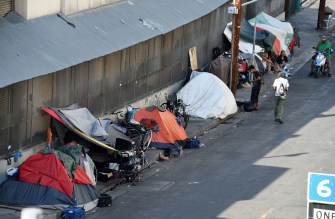 Tents are placed along Skid Row is seen in Los Angeles on September 23, 2015. Los Angeles elected officials declared a homelessness ‘state of emergency’ and pledged $100 million in funding to tackle the crisis. (Photo: Robyn Beck/AFP/Getty Images)

Such fear of the “other” is embedded in the process. A new report, published in December of 2018, traces LA’s homeless epidemic to systemic racism. The study claims that a combination of lack of educational and employment opportunities, criminal justice bias, and healthcare denial to African Americans have massively contributed to homelessness. A 2017 survey notes that black people in Los Angeles comprise 10 percent of the population but make up 40 percent of unhoused.

Repurposing hotels is a no-brainer for serving the homeless population. Los Angeles is filled with small- to medium-sized hotels, many of which are in disrepair or abandoned. HHF president Michael Weinstein notes the price differential: under Measure HHH, an apartment costs $434,000 to build, while a renovation such as at the Baltimore costs $82,000.

The reasons why someone loses their house are many. Sadly, much of the blame is often aimed at the homeless themselves, not the social problems that contribute to the tragedy. One of the wealthiest cities in America, situated in a state with one of the world’s largest economies (the fifth largest as of last year) needs to figure out how to manage those who lack the privilege of the highest earners. This hotel project is a great step forward. Next up: private golf clubs.

Tags
activismhomelessnesshumanityinfrastructurejustice systempoverty
In this article
activismhomelessnesshumanityinfrastructurejustice systempoverty
Related
Should you bring a kid into this world?
Climate change. War. Civil unrest. Is it responsible to have kids today?
▸
4 min
—
with
Ari Wallach
The Present
Spending money on new infrastructure isn’t always the best idea
The questions about which massive structures to build, and where, are actually very hard to answer. Infrastructure is always about the future: It takes years to construct, and lasts for years beyond that.
Neuropsych
Beauty bias: hopefully the judge finds you attractive
Justice is not blind to beauty.
Strange Maps
One man visited all 2964 bus stops in San Francisco — for science
Americans don’t like to ride the bus. There are ways to fix that.
Neuropsych
Why “survival of the fittest” is wrong
He’s studied apes for 50 years – here’s what most people get wrong.
▸
6 min
—
with
Frans de Waal
Up Next
Neuropsych
High-IQ people tend to choke under pressure. Here’s how to avoid that.
A new study suggests that reframing goals can help smart people avoid choking under pressure.