What comes to mind when we think of an anarchist? Most likely, it’s some punk wearing a bandana throwing Molotov cocktails at riot-control officers. We don’t typically imagine anarchists as elderly, soft-spoken professors, but there’s probably more of the latter than one would think.

Best known for his revolutionary work in linguistics and cognitive science, Noam Chomsky is an avowed anarchist. It seems a like a contradiction. Anarchy is so often portrayed as chaos for chaos’s sake, a perverse impulse to implode a society that’s the product of thousands of years of social progress. What business does a celebrated thinker have advocating for something that seems so fundamentally thoughtless?

Our conception of anarchy has been colored by its most visible proponents — the black-clad protester breaking shop windows with a baseball bat and spray-painting a circled “A” in red. But, like most philosophies, anarchism and anarchists come in a variety of flavors. Mohandas Gandhi, for instance, has been described as an anarcho-pacifist. Noam Chomsky is an anarcho-syndicalist. 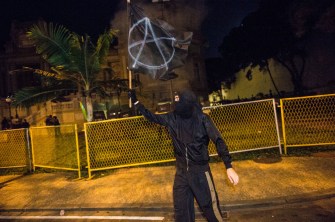 A Brazilian protester holds up a black flag with the anarchism symbol. This may be the popular vision of an anarchist, but it would be an oversimplification to paint all anarchists with the same brush. Photo credit: YASUYOSHI CHIBA / AFP / Getty Images

While anarchism may not be 100 percent focused on dismantling the current system, it would be disingenuous to say that that is not a fundamental tenet. In a 2013 interview, Chomsky explained how he sees anarchism and its role:

“Primarily, [anarchism] is a tendency that is suspicious and skeptical of domination, authority, and hierarchy. It seeks structures of hierarchy and domination in human life over the whole range, extending from, say, patriarchal families to, say, imperial systems, and it asks whether those systems are justified. Their authority is not self-justifying. They have to give a reason for it, a justification. And if they can’t justify that authority and power and control, which is the usual case, then the authority ought to be dismantled and replaced by something more free and just. And, as I understand it, anarchy is just that tendency. It takes different forms at different times.”

By labeling himself as an anarchist, Chomsky is stating that he doesn’t believe the institutions and systems that underpin our society are just. In essence, this is the heart of anarchism; the current system is illegitimate and must be dismantled to be replaced with something better. Popular culture just has a tendency to focus on the dismantling part rather than the illegitimacy part. 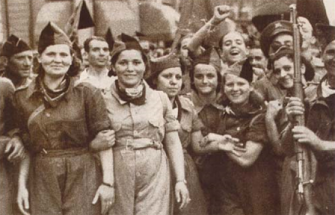 How is anarcho-syndicalism different?

So, what does Chomsky advocate as a replacement to the current system? Here’s where the “syndicalism” part of “anarcho-syndicalism” comes in. Chomsky and others in his school of thinking argue that capitalism is inherently exploitative and dangerous: a worker rents their labor to somebody higher up in the hierarchy — a business owner, say — who, in order to maximize their profit, is incentivized to ignore the impact of their business on the society around them. Instead, Chomsky argues, workers and neighbors should organize into unions and communities (or syndicates), each of which makes collective decisions in a form of direct democracy.

Chomsky’s arguments, though, like many philosophers’ arguments, often fails to dive into the nitty-gritty of how such a world would actually function. Fortunately, we don’t have to speculate: an anarcho-syndicalist government has existed before. During the Spanish civil war, eight million Catalonians actually established an anarchist society, albeit briefly. There was no hierarchy; rather, farms, factories, and businesses were all managed by the people who worked them as equals. Writers such as George Orwell described the Catalonian anarchy in glowing terms, but we also have to attribute these sources with a certain amount of bias (Orwell had fought for the anarchists during the war, after all). And, only 10 months after it started, the anarcho-syndicalist society was undermined by Stalinists and promptly dissolved.

Like any revolutionary idea, Chomsky’s anarcho-syndicalism has its criticisms. In whatever socialized version of the future it produces, for instance, how would a nation defend itself? First, Chomsky points out that the U.S. Defense Department has very little to do with defense—rather, it preserves American interests abroad and contributes to the economy through the production of weaponry. To this point, Chomsky admits the possible failures of anarcho-syndicalism:

“I don’t want to be glib. It might need tanks, it might need armies. And if it did, I think we can be fairly sure that that would contribute to the possible failure or at least decline of the revolutionary force […] That is, I think it’s extremely hard to imagine how an effective centralized army deploying tanks, planes, strategic weapons, and so on, could function. If that’s what’s required to preserve the revolutionary structures, then I think they may well not be preserved.”

This problem, though, is just an aspect of a larger issue with the political philosophy. How will a nation-wide collection of unions and communities coordinate to address big issues, like climate change or planning the economy? To deal with this, Chomsky suggests we broaden our concept of what a union or worker’s council might be: “Let’s take expertise with regard to economic planning, because certainly in any complex industrial society there should be a group of technicians whose task it is to produce plans, and to lay out the consequences of decisions […] They produce plans in exactly the same way that automakers produce autos. The plans are then available for the workers’ councils and council assemblies, in the same way that autos are available to ride in.”

That’s all well and good, but without the promise of a wage, why would anybody want to produce economic plans or build cars? And what about unpleasant work such as garbage collection? Here, Chomsky suggests that most people underestimate how much people value work for its own sake. He suggests that people would do hard work because freely choosing to do hard work can be intrinsically rewarding. As for the truly nasty work like cleaning and garbage collection, Chomsky suggests that every member of a community should contribute equally to accomplishing these unpleasant chores. He also points out that though this would be unpleasant, it would be preferable to the current system, where only those who will starve to death without a wage would choose to undertake such tasks.

Whether you agree with Chomsky or not, considering his arguments for a different society can be beneficial. At the core of anarchism is the rejection of unjust hierarchies. Often, defenders of capitalism will say that it may not be the best system, but it’s the best one we have. (As a quick note, Churchill is often misattributed as saying “Capitalism is the worst economic system, except for all the others”; he may not have actually said this, but the sentiment of the quote is germane). This might be true, but it’s also easy to use this as an excuse to allow its inherent injustices to go unchecked. Understanding how an intellectual giant like Chomsky could reasonably consider a crazy, radical system like anarchy can underscore the failings in our current system — that way, we can at least start working toward making a better society, which is really what all political arguments are about anyhow.

In terms of sheer productivity, “-gate” has no peer. Wikipedia’s list of -gates has over 260 entries.
The Past

Soviet researchers studied crime through a Marxist-Leninist lens. Under Lenin, a humanitarian approach to criminality briefly emerged, but dissipated when Stalin rose to power.
Videos

Bitcoin is often derided as volatile, but a new report suggests there is a method to the madness.
Up Next
Health

A picture says a thousand words.