American law enforcement agencies made 1.63 million arrests for drug law violations in 2017, according to FBI data. That’s nearly a 4 percent increase from 2016, and it breaks down to about one drug arrest every 20 seconds. About 85 percent of those arrests were for possession.

The 2017 National Drug Use And Health survey from the Substance Abuse and Mental Health Services Administration shows that drug use and availability are on the rise across the country. At the state level, however, the data illustrate a varied and more nuanced picture.

In 30 states, methamphetamine was the drug most frequently involved in drug-related offenses for 2017. 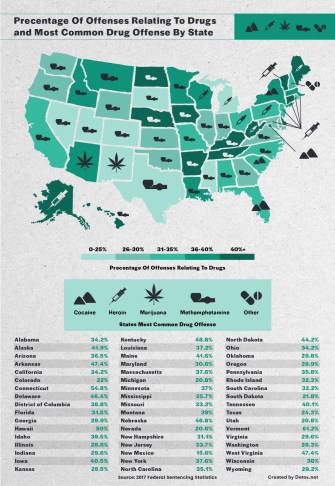 “Crystal meth is the drug most frequently seen in criminal offenses, because possessing just a small amount can lead to very significant criminal consequences,” Dr. Pannel said. “Once a person is hooked on meth, it requires a large amount to maintain the habit. This usually leads to criminal behaviors including theft, to support the habit with money.”

Marijuana was the most cited drug in offenses for only two states in 2017. Still, it’s surprising to note that, despite increasingly lax cultural attitudes and the legalization of pot in 10 states, marijuana arrests are actually on the rise, with one person being arrested every 48 seconds, according to FBI data released in September. 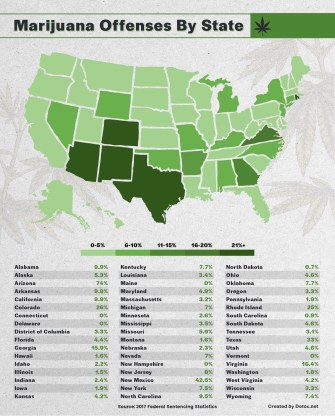 The map above shows the percentage of total drug offenses attributable to marijuana in 2017. Each state clearly varies in how it pursues marijuana enforcement, especially those which have decriminalized pot, such as Connecticut, Delaware and New Hampshire. Interestingly, Colorado still arrests many people for marijuana offenses, which can include public consumption, illegal sales and underage possession.

A more consistent pair of metrics across the states are the rates of plea deals and prison sentences for drug offenses. 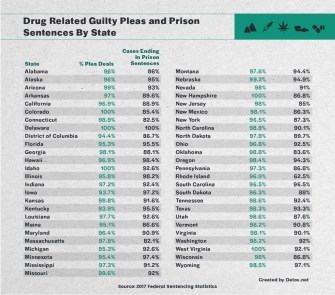 Rhode Island stands out with an exceptionally low share of drug offenses ending in prison time, likely a result of the state’s move to roll back mandatory minimum sentencing in recent years.

The rates of sentencing might be fairly consistent on the national level, but the severity of punishment seems to vary across the states, with Iowa as the strictest state and Arizona as the most relaxed. 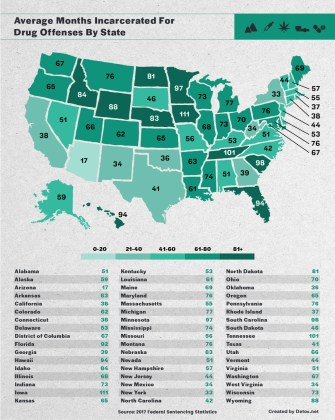 Dr. Pannel said he hopes the report helps draw attention to the drug epidemic in the U.S.

“This study serves as a wake-up call on the magnitude of the problem and how the drug epidemic is impacting our criminal justice system. What it shows is that millions of Americans are charged with drug-related crimes and many are incarcerated for it. We hope this will help start a conversation about the need for treatment to help deter these types of crimes.”

You don’t need to completely automate a job to fundamentally change it.
Neuropsych

Fear that new technologies are addictive isn’t a modern phenomenon.
Up Next
The Present

The controversial scientist He Jiankui is currently missing after causing major controversy in late November.