Three wildfires are wreaking havoc in California as they blaze across tinder-dry landscapes, one north of Sacramento and the other two west of Los Angeles.

Early Thursday morning, the so-called Camp fire tore through the town of Paradise, destroying some 2,000 homes and buildings, and forcing 30,000 people to evacuate the area. The cause of the fire has not been determined.

“There’s nothing much left standing,” a fire department spokesperson said about Paradise.

At least five people have been found dead so far. 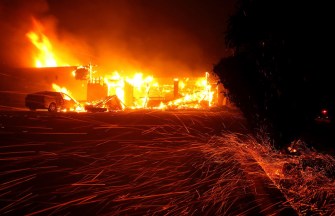 PARADISE, CA – NOVEMBER 08: Embers blow in the wind as the Camp Fire burns a KFC restaurant on November 8, 2018 in Paradise, California. (Photo by Justin Sullivan/Getty Images)

As of Friday morning, the Camp Fire had burned an estimated 70,000 acres, or 110 square miles, according to a government fire tracker. Some 2,000 firefighters have been trying to contain the blaze and prevent it from spreading to the nearby city of Chico, home to 90,000 people. The firefighters, several of whom have been injured so far, had only contained about 5% of the wildfire as of Friday morning.

Strong winds and dry conditions are feeding the blaze, which residents described as lethally quick.

“Everything was ignited by the time I got out of my house, everything was on fire,” one person told CBS News.

NASA and the US Geological Survey’s Landsat 8 satellite captured images of the wildfire from space. 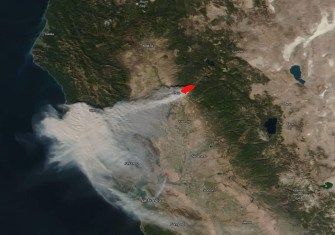 The National Oceanic and Atmospheric Administration shared an animation of the Camp Fire that it generated using data from its Goes-East weather-monitoring satellite.

Hot spots and a large plume of smoke from the #CampFire in Northern California are even visible from space! To make this #GOESEast animation, fire temperature imagery was made partially transparent and placed over the geocolor image. More: http://go.usa.gov/xPvvF pic.twitter.com/ml7yZsRm6B

The Earth Resources Observation and Science Center issued another aerial view of the wildfire.

Strong winds rapidly pushed the #CampFire in California from 10 to 10,000 acres on Thursday. The city of #ParadiseCa was all but decimated. #Landsat 8 captured this image of the ongoing devastation.pic.twitter.com/3ZHtqyVGrI

The Woolsey and Hill fires in Southern California

Two other wildfires are burning in Southern California. Acting California Gov. Gavin Newsom has declared a state of emergency in Los Angeles and Ventura counties after the fires erupted just hours after the Camp Fire began, forcing the evacuation of some 88,000 residents. 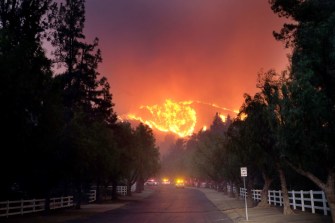 The fast-moving Woolsey Fire has so far burned 14,000 acres in Westlake Village, northwest of Los Angeles, and it appears to be spreading west toward Malibu. Nearby, the Hill Fire had burned about 6,000 acres in the Santa Rosa Valley area as of Friday morning, just miles away from the bar where a shooting left 12 dead Wednesday night.

In recent years, California has seen especially hot, dry summers that have contributed to the uptick in wildfires across the state. In July, Craig Clements, an associated professor at San José State University who works at the school’s Fire Weather Research Laboratory, told Time that the dry conditions leave the landscape vulnerable to disaster.

Virgin birth – which involves the development of an unfertilised egg – has preoccupied humans for aeons. And although it can’t happen in mammals, it does seem to be possible in […]
Strange Maps

The “Euro Night Sprinter” map is utopian, but Europe’s rail future could look a lot like it.
Up Next
The Present

China’s state-run news agency and the search engine company Sogou have developed an artificially intelligent news anchor that can read the news “tirelessly” 24 hours a day.