In most of the great debates, many possible stances get reduced to two options in a hurry. In American politics, we often frame all debates as “Democrats versus Republicans” and proceed to label every policy or action as belonging to one of those factions. Anybody else, particularly those in the middle, are quickly swept aside and forgotten.

According to a newstudy, this tendency is not only common but is so ingrained in our thinking that you can make a formula to describe it.

“We know what happens to people who stay in the middle of the road. They get run down.” — Aneurin Bevan

A team of researchers at the Santa Fe Institute studied the system using a commonly applied model to try to “solve” for where social boundaries appear on a political scale. The researchers added cognitive and social components — which often drive people into an “us vs. them” style of thinking — to the model’s equations. They hypothesized that people would devise measurable camps of “us” and “them” which would appear in the models. Those who don’t fit cleanly into these roles would tend to be overlooked.

The results of the model were compared to data from surveys in the 1980s, which included questions about how respondents felt about members of other political groups, to check for accuracy. Importantly, during that decade, many people were asked about political independents in the center, deemed “inbetweeners” by the researchers, as well as about their stance on members of other parties.

Though one might suspect that people viewed those in the middle as potential allies, the tendency to divide the world into two buckets simply excludes those in the middle. The model predicted, and the survey’s from the 80s confirmed, that both those on the left and right viewed centrists unfavorably.

“By being ‘inbetweeners,’ independents are viewed as unfavorably as the other party by both sides, and left out. So Independents get the worst of both worlds, and there are downstream consequences.” 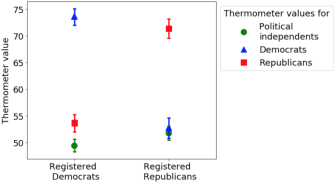 Graph showing how members of both major American parties viewed fellow party members, those of the other party, and independents. The values came from the American National Election Studies surveys. Credit: Yang et al.

The authors speculate that this phenomenon could cause those in the middle to drift towards the extremes in hopes of avoiding the ills of being in the middle. Over time, this could lead to a highly polarized society, as nobody is left in the middle at all.

These findings are not necessarily limited to politics. The model could be applied to how society views people of indeterminate race or who do not fit cleanly into categories of sexuality, for example. Additionally, because group labels evolve over time, we should see the formation of entirely new groups and inbetweeners. In the study, the authors note that the model was limited for exactly this reason and hope that future studies will expand on the concept.

Since at least 600 BC, people have been mesmerized by the concept of the infinite.
Thinking

This world map shows how the rest of the world LOLs. In France, you MDR; in China, you 23333.
The Present

A clear alternative has yet to emerge.
Up Next
Starts With A Bang

Some Black Holes Are Impossible In Our Universe

For the real black holes that exist or get created in our Universe, we can observe the radiation emitted by their surrounding matter, and the gravitational waves produced by the […]